Home » Air Hockey » 3 Quad Air Hockey Tables That Four Can Play On At Once!

If there's one bad thing about air hockey, it's having to wait while your friends use the table. It's hard to sit on the sidelines and watch the high-paced back and forth action without itching to play the next game. But what if you didn't have to wait? Well, now you don't! With these four player air hockey tables, all your friends and jump in and be involved in the action.

If you were wondering, that introduction was made to be a bit sensationalized. On a more serious note, quad air hockey tables do exist and they can be super fun. This list will help you decide which one is best for you.

Here's a short video clip of the game in action at an arcade:

The Atomic Full Strength four player table is probably the most popular on the market. This is probably because the pricing typically falls well below any of the other tables out there. While it's not going to give you the full experience that you'd get at an arcade, it's still a decent table to get for kid-friendly entertainment and quality family time.

Goal Inserts: The goal inserts are little pieces that can be pushed into any of the goals to create a barrier so pucks can't go in. This allows the table to support 2-player and even 3-player mode.

Electronic and Manual Scoring: Located close to each goal end, there's a small LED screen that keeps track of the score as well as a sliding-abacus marking device that allows you to manually do so. Some of the cheaper made electronic scorekeepers tend to malfunction, so it's great to have a back up.

LED Strikers and Pucks: Rather than glowing in the dark naturally, the pucks and mallets on this table actually light up themselves. As children of the 90's, we as staff of Amazing Game Room always enjoy a laser light show!

Game Modes: Because there are no hard and fast air hockey rules on a four player table, there's a little bit of flexibility when it comes to the rules. The most popular options are team play, elimination style, and individual mode. 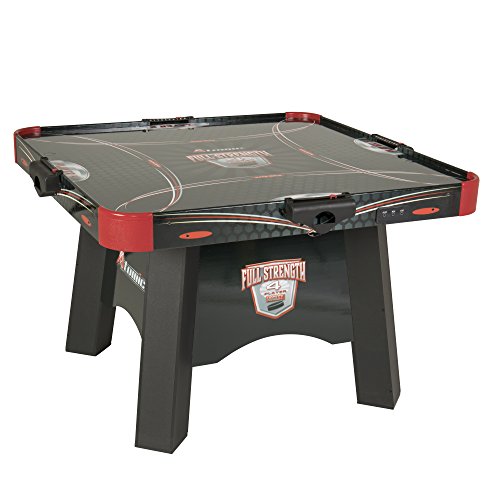 Hence the name of the table, the Orbit Elminator is four person air hockey based around elimination, which is the most fun way to play four person air hockey anyway. Located next to the goal of each player are three lights. If you let yourself get scored on, one of those lights will illuminate. Once you've allowed three goals, you're officially out of the game. At this point, you have to insert your goal blocker to nullify your goal. Then, the remaining players finish the game in the same fashion until one person wins.

Goal Inserts: Just like the Atomic table, the Orbit Eliminator comes with two inserts to place in the goals so that you can play with 2 or 3 players and to block out scoring once someone has been eliminated.

Leg Levelers: If you've got a floor that's slightly uneven it's helpful to have the included leg levelers so that you can still make the playing surface completely even.

Lighted Scoring: As mentioned, each goal has three lights attached to it to represent how many goals a given player has let through. Once they give up three goals, that player is eliminated.

The Orbit Eliminator is available in a black finish or a  .

This 4 player table by MD Sports is quite similar to the Orbit Eliminator. In fact, aside from a few design differences, it's pretty much identical. The game is played the same way: elimination style and it comes with the same exact sizing and important features.

Sizing: This table measures the same as the Orbit, 55" on the squared sides and 31" tall.

Goal Inserts: The same two goal stoppers that come with the Orbit also come with the MD Sports Table to keep things bouncing when players are eliminated.

Lighted Scoring: To go along with the aesthetic, this table has three blue scoring lights to indicate when you've had a goal scored on you. 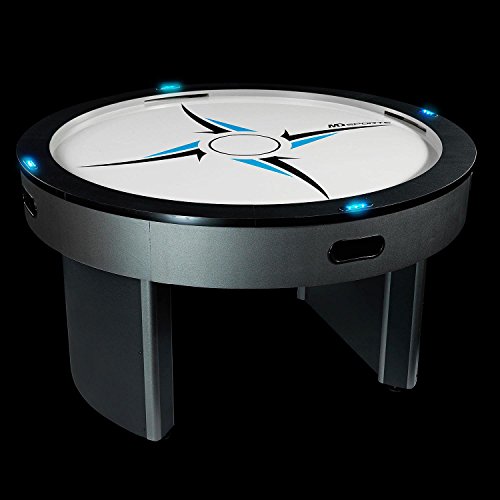 What Should You Pick?

Although the case could be made that the quality is a bit lower than the others, our recommendation is going to be to go with Atomic Full Strength. At the time of writing this article, the pricing difference between the Atomic and the others was just far too large. If you’re looking to spend a lot of money, we think you’re better off choosing something from our list of https://amazinggameroom.com/air-hockey/best-tables/”>topkey tables rather than getting a four player one. But hey, that’s just our opinion, if you absolutely love the design and functionality of the Eliminator or the MD Sports model then feel free!

Note: If prices are drastically different at the time when you’re reading this, we’d change our pick to one of the other two!