Home » Billiards » 9 Different Types of Pool Sticks – Do You Know Them All?

Did you know that there are different types of pool sticks for different applications? In this list, we've put together the 9 most popular options and explain the purpose behind each one. 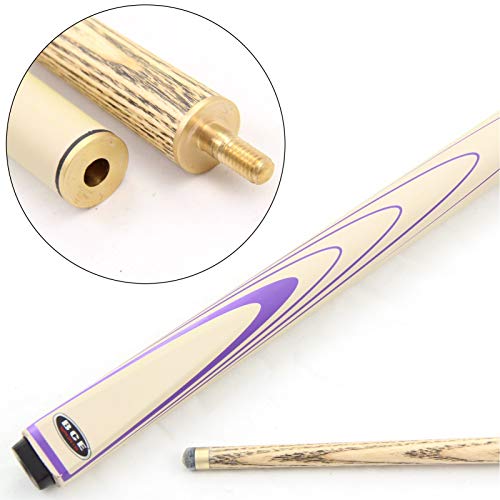 Since snooker is a bit different from what most people think of when they think of playing pool, it makes sense that the cue will be different as well. These cues are generally between 57” and 58” long and tend to be made from ash. They have a tip that is between 9mm and 10.5mm and is connected to the cue with a brass ferrule. The bigger tip makes it much easier to hit the ball.

Thanks to using North American ash as the wood for these cues, they generally tend to be incredibly stable, straight, and strong, which is why they are considered to be one of the best types of pool cues on the market. 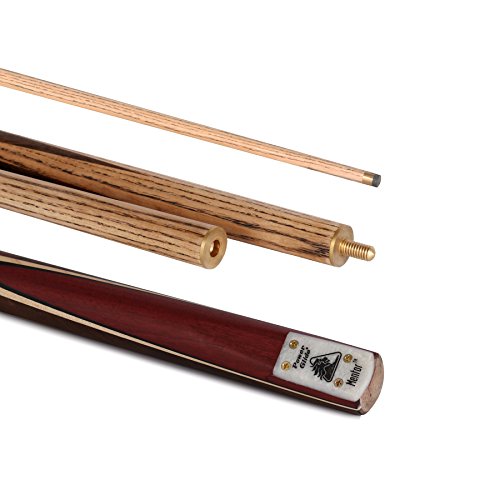 English cues are very similar to snooker cues. They use the same materials but the difference is in the length of the cues. English cues are 57” long and also have a butt that makes it easier for players to be able to reach farther shots without any problems. They have a tip that is between 8mm and 9.5mm. This size tip is perfect to hit the balls used, which are 2.25”. 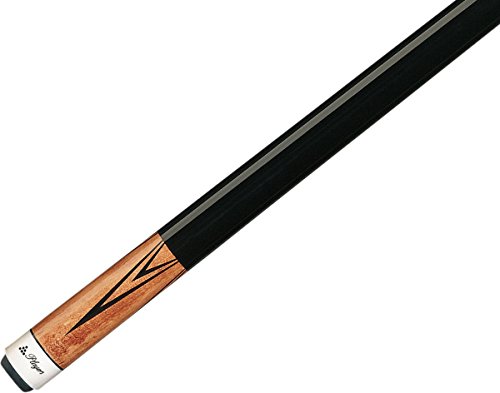 Another great type of cue that you can use to play pool is American cues. These are usually made from maple and tend to be between 57” and 58” long. This is considered the standard size, although it is possible to buy special cues that are going to be a different length. They are made with maple and have a much larger tip that can easily hit the ball used in the game. With a tip of 12mm to 13mm, it’s easy to see how it can readily strike the ball.

American cues tend to vary widely in weight, making it a matter of personal preference what weight pool cue the player uses. Between 18 ounces and 21 ounces are common weights that players can choose.

These cues are generally used in clubs and pubs to play pool, which means that they aren’t generally found in a pool owner’s home. They are made in just one piece and are often bought together as a bundle with the pool table itself. As a significantly less expensive option for pool players, they are fairly common. The tips of the cue aren’t attached to the ferrule with any glue so the player always has a chance that he or she will miss when hitting, which means that these cues can be a little frustrating to you. They are best for light use and aren’t generally used in competitions.

If you want to enjoy a traditional feel when you play pool, then you will most likely want to choose a wooden pool cue. These cues are the ones that are favored by traditionalists who enjoy not only the way that they feel in their hands but also the great sound that they make when breaking the balls. They pass along the feeling of the impact to the pool player, which some players really like and feel as if it makes them more part of the game.

When choosing a wooden pool cue, you will want to consider the tip construction as they come in all different levels of hardness. Softer tips are great for players who want to have more spin on their balls but they do tend to wear out faster than harder tips. These tips are often made from compressed leather. Additionally, players need to determine the weight of the cue that they want to use. Lighter cues may provide users with more control but simply won’t have the power for really high-impact hits. Heavier cues, of course, have more impact but can make it difficult for players, especially new pool players, to exert the control over their cues that they really need.

The main problem that users can run into when they opt for a wooden pool cue is that these cues are prone to warping over time as they simply aren’t as durable as modern materials such as fiberglass. These cues are also much more expensive than modern options are, which means that they are generally out of reach of beginners. Additionally, they require a little more control and finesse so intermediate and advanced pool players tend to reach for wooden pool cues while beginners are going to more often play with fiberglass cues, at least until they are more comfortable with the game. 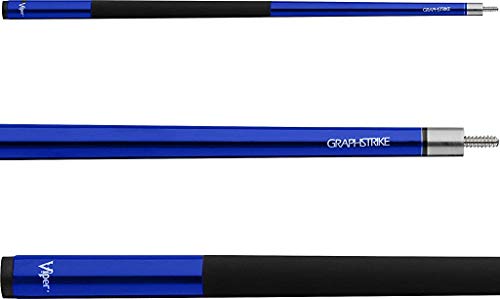 While wooden pool cues may be the gold standard for a lot of players, fiberglass cues are growing in popularity and are often found in a lot of homes. They tend to be significantly lighter in weight than wooden pool cues, which means that beginning players will be able to easily manipulate and handle the cue without a lot of problems. Because players have more control over the cue, they are going to feel as if they have more control over the game, which will give them confidence.

When opting for a modern fiberglass pool cue, players need to consider its construction. The joint type and pin construction are really important and play a huge role in how accurate the pool cue will be. Titanium pins are popular because they provide a great hit force and are very light in weight. Other areas of construction that need to be considered include the ring construction, as players will benefit from one made out of metal; the forearm construction, as veneer and fiberglass are the best choices; and the bumper construction. The bumper is where players have control over the cue. By choosing a bumper that is light and offers great energy transfer, players can enjoy the power that they crave when playing.

These modern cues are much lighter in weight than wooden cues are, which means that they are great for speed and great for accuracy when hitting the ball. They are perfect for players of all abilities and tend to be much more economically priced than all wood cues. In addition, they offer a lower deflection angle as well as impressively high accuracy. However, the main drawback with this type of cue is that they tend to offer much lower force than a wooden pool cue can offer.

Generally speaking, pros tend to use lighter cues that weigh between 19 and 19.5 ounces. Pool cues can be bought weighing even less, depending on your style and what you are looking for from your stick. The laws of physics come into play when determining what weight of pool cue you will best benefit from using. Light cues can be used a lot more quickly than heavier cues can, which means that you will enjoy a much more powerful break.

Additionally, you will be able to move the cue more easily throughout the game when you opt for a lighter cue. Pool players of all abilities find that when they opt for a lighter cue instead of a heavier one, t they are much less prone to jerking their hands offline. This can be caused when you have a lot of friction from your guiding hand but using a lighter cue is a great way to deal with this problem.

A 19- or 20-ounce pool cue is a great place to start for most beginners as it allows them to figure out what weight will work best for them and then to adjust accordingly. Pool cues that are this weight are generally fairly easy for most people to use, although they do experience some of the drawbacks of both lighter and heavier pool cues so that is a trade-off that users have to accept.

Pool players who opt for a heavier cue weight are going to be able to send the balls moving much faster across the pool table. These cues simply don’t move as quickly as lighter cues do and this also results in a lethargic cue ball that rolls a little more slowly across the table. Since you are using much more weight when you use a heavier cue stick and simply don’t have as much snap in your wrist and in your movement, it’s normal for the balls to travel more slowly.

While heavier pool cues simply won’t allow users to have the same feel and touch that a lighter pool cue does, it’s important to note that these heavier cues tend to provide much more sidespin and spin on a ball, which some players really love to use during their games. While they are great for shots such as these, the heavier weight of these cues will slow down the break. This is contrary to what a lot of players think as they believe that the extra weight of the cue will cause a stronger and more powerful break. Because of this, many players opt instead for a lighter cue that will allow them to easily and quickly break and to move more quickly around the table.