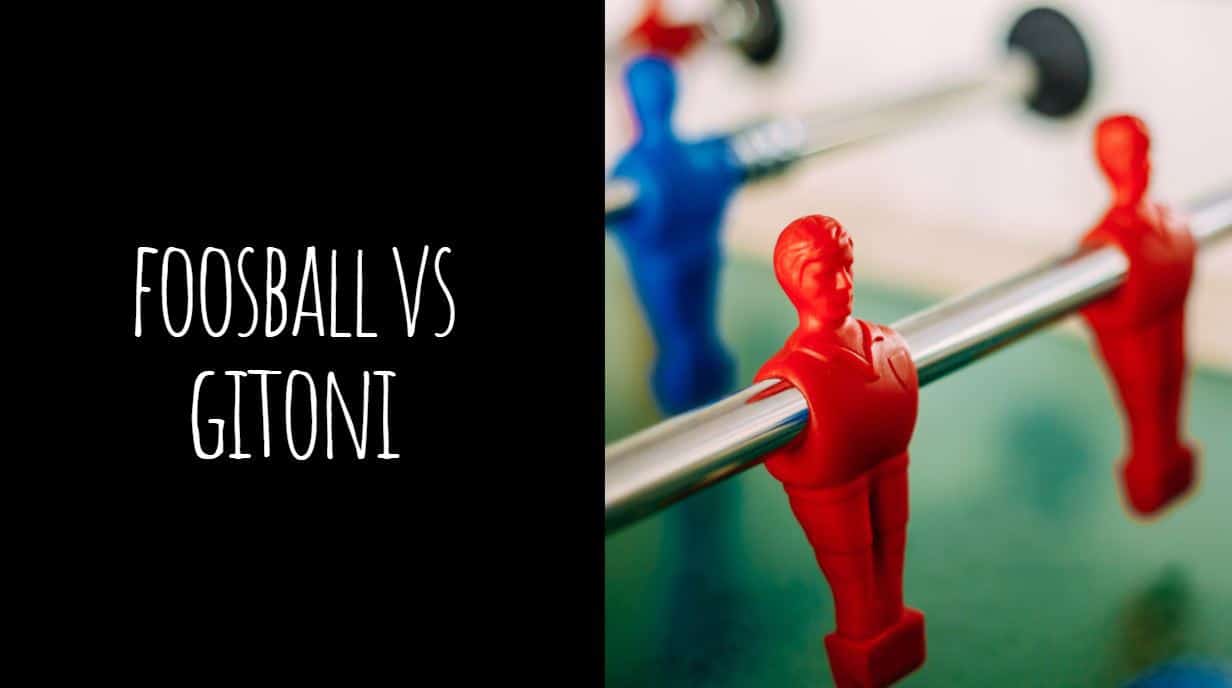 As you read more about foosball, you might see one word cropping up in a few different places: gitoni. At a glance, though, it’s not immediately apparent what this word means or where it comes from.

We also had a lot of questions when we first heard it.

Is it the same thing as foosball? Could it be the name of a brand of foosball table, like Bonzini? Or could it be a particular way to play foosball?

That’s why we’ll be talking about foosball vs gitoni here. We’ll discuss the meaning of both, and whether they’re different.

Use These Links to Navigate this Guide >>
What is Gitoni?
Foosball vs Gitoni: A Head-to-Head Comparison
Wrap Up

While most agree that gitoni is just another name for foosball, it’s unclear what the true roots of the word are. Some sources claim that it’s what foosball is called in Canada.

The word supposedly comes from another word, “gettone,” which is a token inserted into the table that allows people to play the game.

Others say that gitoni is an Italian word, and refers to playing foosball on Italian foosball tables. However, it’s worth noting that some Italians have stated that gitoni is not a word used in Italy.

Whatever the true roots of the word are, you can be sure that gitoni is another name for foosball.

Foosball vs Gitoni: A Head-to-Head Comparison

Is there any actual difference between gitoni and foosball? That depends on who you’re asking.

One thing that most agree on is that gitoni is what Canadians like to call foosball. In Canada, it’s commonly played on tables where you need to insert a token called a gettone, which is one possible explanation for the name.

There are others who also say that if you’re playing gitoni, it means you’re playing foosball on an Italian-style table. That means the table would come from a manufacturer like Garlando and would have only one goalie, a glass surface, and rods with springs in them.

On foosball tables commonly used in the United States, you’ll usually find three-goalie rods and rods that protrude out the sides. Interestingly, though, the word “foosball” itself has a German origin.

Read Also: 13 Fantastic Foosball Tables with One Goalie Instead of Three

One thing we’ve discovered the more we’ve researched foosball is just how many names it has. It’s not something you often think about, but almost every country has its own unique word for the game.

Gitoni is just one example of another name for the table-based game so popular around the world. If you’d like to see more examples of words for foosball, we’ve written about it further in our discussion on other names for foosball.​