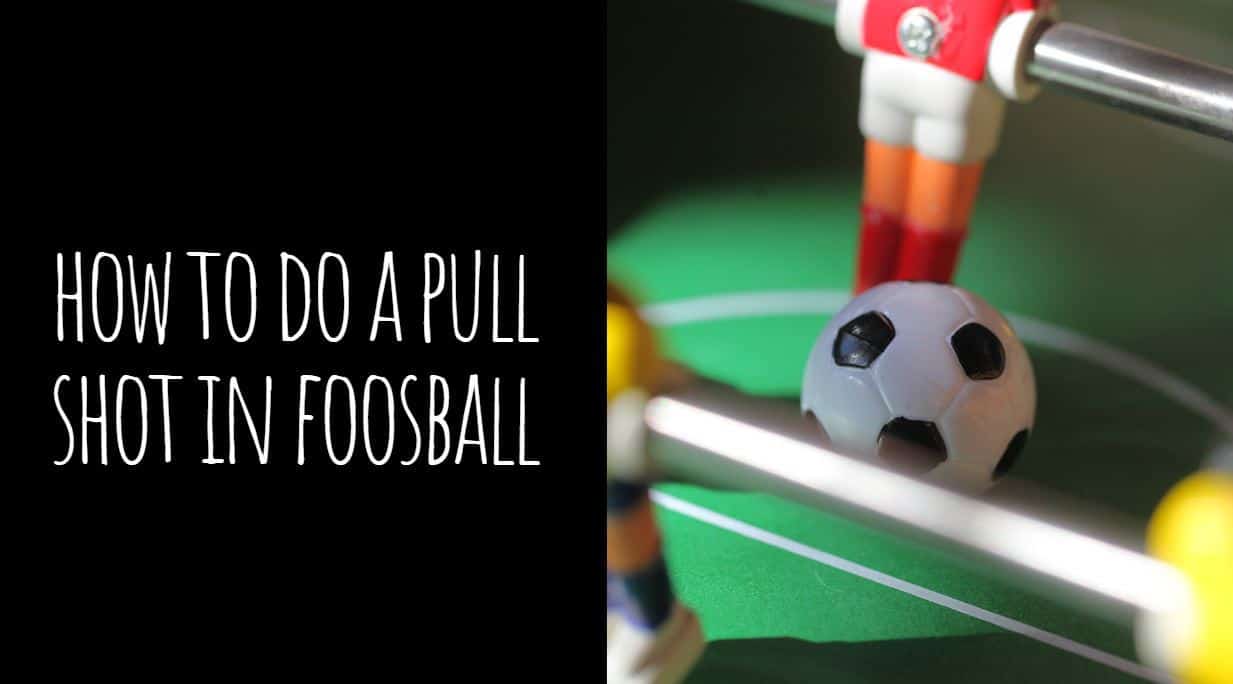 Every time we talk about foosball, we feel it’s necessary to mention the fact that it’s a strategic game. Although the ultimate objective is to score points, there are many ways to go about scoring them.

Over time, dedicated players have developed different kinds of shots. If you’re serious about the game, you’ll need to learn as many shots as you can.

One great starting point for beginners is the famous pullshot. In this brief article, we’ll explain to you how to do a pullshot in foosball, and why you should do it.

Use These Links to Navigate this Guide >>
What is a Pullshot and Why Should You Do It?
How to Do a Pullshot in Foosball
Wrap Up

What is a Pullshot and Why Should You Do It?

A pullshot is when you take your shot while simultaneously pulling the rod towards you.

The reason to use the pullshot is that it can be incredibly speedy. That means it’s harder for your opponent to block.

It also allows you to move the ball around defenders deftly, and then to fire the ball straight in when you see an opening.

Read Also: How to Do a Snake Shot in Foosball

How to Do a Pullshot in Foosball

Make sure you grip the handle correctly.

The first step to taking any shot is understanding the position of your hand. With most beginning players, the instinct is to grip the handle of the rod as tightly as you can.

That’s the wrong grip to use, though. You shouldn’t be squeezing the handle tightly, because it doesn’t give you the flexibility you need to move.

Maintain a more relaxed grip on the handle. A looser grip will give you more flexibility to move and control the speed of the ball.

Familiarize yourself with the movement you’ll need to do to take the shot, too. You’ll need to turn your wrist, so the rod spins approximately 180 degrees.

Your stance is important.

When people think about what matters most in foosball, they mostly think of hand placement and moving the rods. But one of the many secrets to the game is that your whole stance matters.

There isn’t a particular way you should hold your feet or shoulders to guarantee the best shot – it depends on how you feel. It’s most important that you’re comfortable and able to move.

Experiment with the positioning of your feet. Try holding your shoulders and back differently. You need to make sure you have enough room to pull the rod back, so as long as you can do that smoothly, you have a decent stance.

Set up the shot right.

Now that we’ve discussed practicing, let’s look at actually taking the pull shot. Before you can actually fire the ball, you’ll need to set up the shot just right.

You’ll need to hold the ball as close as possible to the middle foos man on your offensive bar. The foos man should also be standing straight up, rather than leaning forward or backward.

Tilting the foos man will lead to your shot spraying, which means it doesn’t go straight to the goal.

Your opponent matters when you’re preparing to do a pull shot. Check out how they’re standing and how they’re holding their rods.

You’ll need to time your shot just right to get a point. Watch how the other player moves their foos men in response to you and fire the shot accordingly.

You’ve spotted the opening and set up the shot, so now it’s time to actually take the pull shot. There’s definitely a method here, too.

The width of the goal is a little over five times that of the ball. That means there’s about five full openings or “holes” you could get your ball through.

The opponent will have two foos men right in front of the goal to guard at least two of those openings. That means you’ll have three openings.

Pull the rod towards your body, dragging the ball along with your foos men. Once you’re right across from your opening, rotate turn your wrist and spin the rod, hitting your ball with the middle foos man.

If you’re a visual learner, check out this video below for a video on how to do a pull shot.

The pull shot is one of the easiest shots to learn for beginners. If you’re interested in sharpening your skills, this is one you should definitely add to your repertoire of shots.