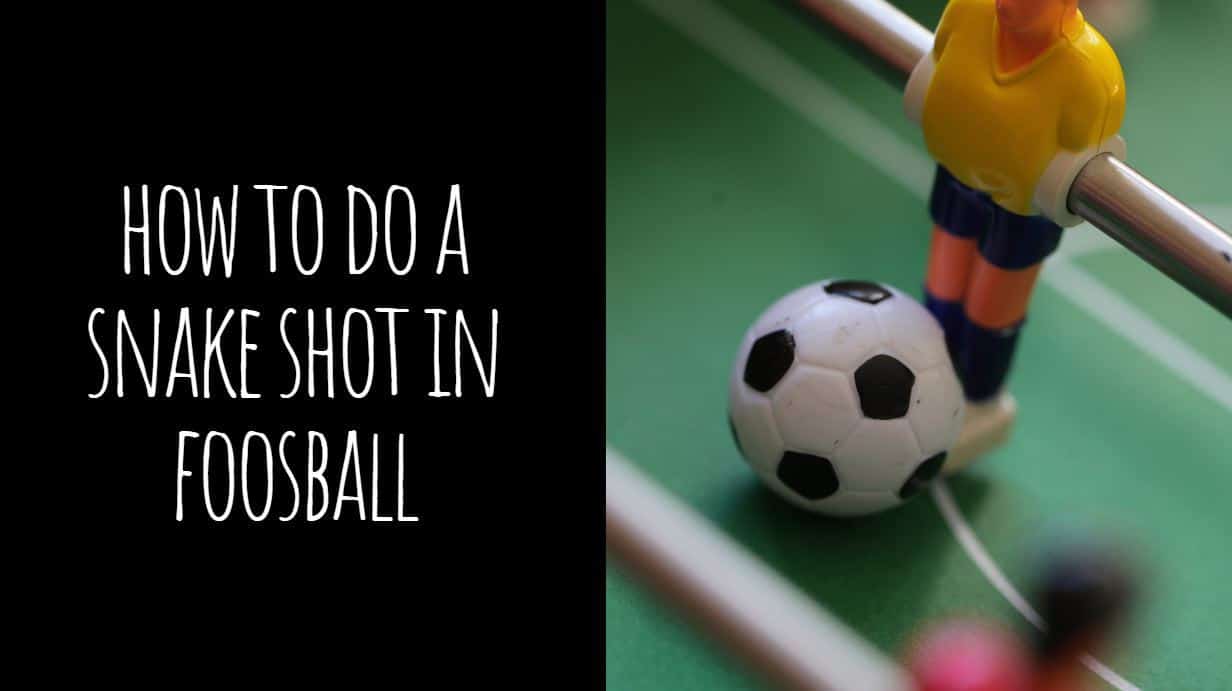 Foosball has existed long enough in a competitive format for players to develop all kinds of unique strategies. Many of them are interesting to watch when executed by an expert.

One of the most famous strategies is called a snake shot. If you can pull it off, it can give you an edge in casual games that your friends probably wouldn’t be able to respond to.

If you’re wondering how to do a snake shot in foosball, we’ll walk you through it. We’ll be including a video later on, too, so you can see a detailed demonstration on how it’s done.

Use These Links to Navigate this Guide >>
What is a Snake Shot?
Should You Use Snake Shots?
How to Do a Snake Shot in Foosball
Wrap Up

What is a Snake Shot?

Foosball beginners might not even know what a snake shot is. Just in case that description applies to you, we’ll give you a brief introduction to the maneuver.

A snake shot is a type of shot you can make that targets your opponent’s goal. The movement behind it is complex, but when done correctly, it’s fast and powerful.

You use an open-handed grip for the beginning, with the handle resting on your wrist. As you pull your hand up over the grip, the rod spins and you strike the ball.

The movement is like a snake, because there’s a sliding and rolling motion. Like a snake striking, it’s also lightning-fast.

Should You Use Snake Shots?

Some people rightfully have questions about snake shots. One that commonly comes up is whether or not they’re legal.

As you may know, the International Table Soccer Federation’s rules describe the act of spinning as illegal. Spinning is when a player rotates the rod a full 360 degrees before or after striking the ball.

Snake shots involve rolling the rod prior to striking the ball. However, the rod does not turn in a full circle – just pretty close to it. Because it’s not an entire 360 degrees, it’s acceptable to use.

One of the greater arguments against a snake shot is that it’s difficult to learn. It may be one of the hardest shots in the game.

However, if you can master it, you’ll be well on your way to honing your foosball skills. Many professional players use snake shots.

How to Do a Snake Shot in Foosball

Step One: Get used to rocking the ball.

Pushing or pulling the ball are crucial movements to the snake shot. You’ll need to pass the ball to your middle foos man on your offensive bar, after all.

That means before attempting a snake shot, you should get used to rocking the ball. Set the ball on the table where you can easily pin it in under your foos man.

Then pull the rod back and forth, just enough to roll over the ball backwards and forwards without completely letting go of it. This will help you familiarize your muscles with the motion. 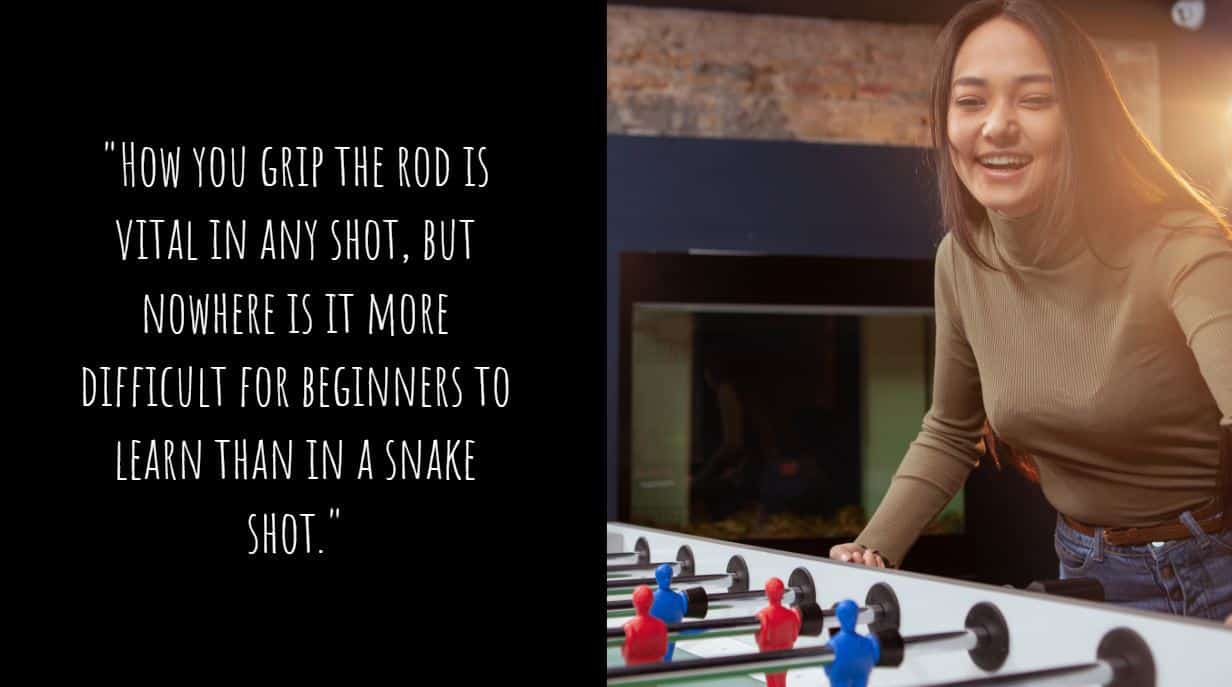 How you grip the rod is vital in any shot, but nowhere is it more difficult for beginners to learn than in a snake shot. That’s because you don’t start with your fingers wrapped around the handle, where they normally go.

Instead, the handle will rest against your wrist while your palm hangs down beneath it. Then you’ll roll your arm up the handle until it’s in your palm, spinning the rod.

This movement takes practice. Find the spot on your wrist where it feels most comfortable for the handle to rest against.

Don’t forget to practice your stance, too. Some players will curl their hand around underneath the handle, and others prefer to let their hand rest straight down.

Step Three: Pass the ball to your middle man on your offensive bar by pushing or pulling.

Getting ready to do the snake shot is tricky. Remember, the goal is to be able to pin the ball to the table with your foos man and then take the shot.

The ball needs to be moving towards one of the external foos men on your offensive bar. When this happens, pass the ball towards the middle foos man.

As the ball moves towards the middle man, allow it to hit the edge of its foot. This will make the ball move forward slightly so you can pin it to the table.

Step Four: Pull your wrist and arm up the bar, spinning your middle man and striking the ball.

After the ball has been pinned in place, you’re finally ready to take the shot. This is where you pull your open hand up over the handle, spinning the rod.

As you do this, push or pull the ball.  The rod will spin in almost a full circle, striking the ball and driving it towards the goal.

If you’re a visual learner, take a look at the video below for in-depth advice on how to do a snakeshot.

Make no mistake: snake shots are difficult. They take time and effort to learn.

But if you’re willing to put in that time and effort, the results are worth it. You’ll have learned a shot that will amaze your friends and hone your skills even further.