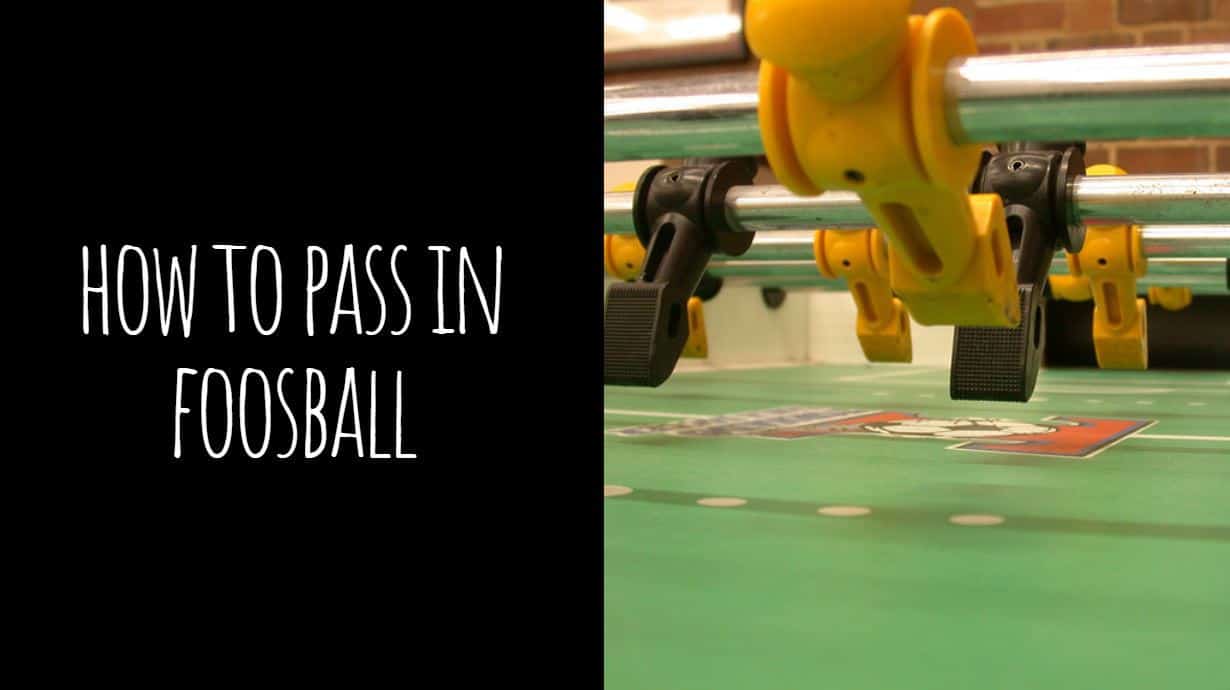 Everyone knows that the objective in foosball is to score points. Similarly, most people know that this is done by getting the ball into the goal.

But you can’t just rely on each individual foos man to score shots with. More often than not, you’ll need to move the ball to the optimal position to shoot, and that will involve passing it around.

We’ve created this guide on how to pass in foosball so that beginning players will know how to become excellent at passing. Since it’s a huge part of advanced foosball, mastering the art of passing will help you become a much more formidable player.

Use These Links to Navigate this Guide >>
Is Passing Important?
How to Pass in Foosball
Learn the difference between the two most common passes: brush and tic tac.
Performing a brush pass.
Practicing a tic tac pass.
Wrap Up

Absolutely! The best foosball players in the world are adept at passing the ball.

Like we mentioned previously, you need to be able to get the ball to the perfect location before attempting a shot. Simply smacking at the ball with all your foos men isn’t going to get you anywhere, and skilled players will be able to easily counter you if that’s all you do every time.

How to Pass in Foosball

Learn the difference between the two most common passes: brush and tic tac.

It’s important to differentiate between the two most used passes in foosball, the brush and tic tac passes. The difference lies in how the foos men are positioned during the pass.

In the brush pass, foos men are tilted backwards so that their toes just barely touch the ball. Once tilted, they move from side to side, passing the ball from your middle five-man bar to your offensive three-man bar.

The foos men remain completely upright in the tic tac pass. You use the sides of their feet to tap the ball back and forth between foos men on the same bar before passing it to another bar.

Typically, a brush pass is performed using your five and three bars. (The five bar is the one in the middle of the table with five men, and the three bar is the offensive bar with three men.) The brush pass gets its name from the motion you’ll be doing: brushing your foos man’s toes over the ball lightly.

You can practice this movement by setting the ball down right in front of a man on your five bar. Tilt the rod so the toes of the foos men are facing back and move them back and forth just above the ball.

By pulling the rod back and forth and hitting the ball on one side or the other, you can send the ball going towards either side. Simply brush the toes of your foos man over the ball and twist your wrist as you slide over to pass the ball.

This video will show you in detail how to execute a brush pass.

The tic tac pass is ideal for confusing your opponent. If you pass the ball back and forth between foos men on the same bar rapidly enough, your opponent will have a harder time predicting what you’re going to do next.

This movement takes practice. Set the ball near your five bar, between two of the foos men. Keep them upright and pull the rod back and forth to pass the ball between the two men you set it near.

As you get more comfortable with the movement, you can hit the ball up the same bar. Tilt your men back so it can move farther up the bar, and then catch the ball on the toes of another man down the line by tilting them back into place.

When you’re ready to pass the ball after tic tac-ing, just flick your wrist when the ball comes into contact with one of your foos men.

Here’s a video showing you how to practice the motion:

Learning to get good at passing in foosball is one of the best ways to make yourself competitive. Master the brush and tic tac pass, and you’ll undoubtedly wow your friends. You might even be able to set your sights on playing professionally.