1. Tajic, Blade of the Legion 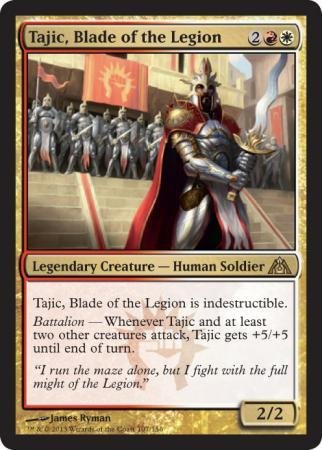 Tajic, Blade of the Legion is a rare multi-colored (red and white) 2/2 Legendary Human Soldier (creature). He has a mana cost of 2 colorless, 1 red, and 1 white mana.

Not only is Tajic Legendary, but he is Indestructible and has the Battalion ability as well.

When Tajic, Blade of the Legion attacks, with at least two other creatures, Tajic receives a boost of 5 power and 5 toughness until the end of the turn.

It is clear to see that he is one of the very best Aggro creatures MTG ever dreamed up. 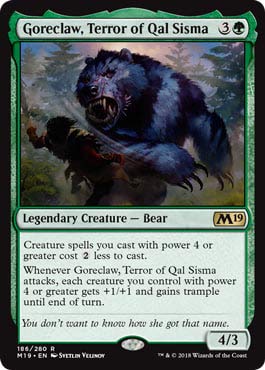 A Legendary Bear Creature with 4 power and 3 toughness right out of the box, this rare green card is another of the best aggro creatures MTG has ever printed.

When Goreclaw, Terror of Qal Sisma hits the field, all creature cards you cast while he’s still alive cost 2 less to cast (so long as they have less or equal power to Goreclaw).

Even better though, when Goreclaw, Terror of Qal Sisma attacks, all of your creatures that have at least 4 power gain Trample and receive a +1/+1 boost until the end of the turn. 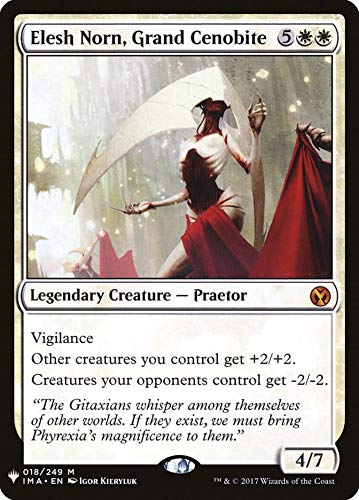 The only pure white card to make our list of the best aggro creatures MTG has is Elseh Norn, Grand Cenobite. The card has a steep cost to cast; 5 colorless and 2 white mana.

A mythic rare card, this 4/7 creature is a Legendary Praetor with Vigilance. Elesh Norn isn’t a real aggro creature, but its abilities are perfect additions to a deck full of aggro creatures.

When Elesh Norn is on the field,  you gain a +2/+2 on all of your creatures. Your enemies, however, gain -2/-2 counters on all of their creatures.

As you can see, these abilities make it so much easier for aggro creatures to do their job and demolish your foes! 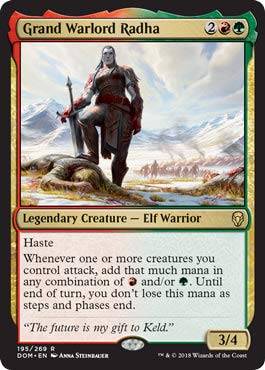 The Grand Warlord Radha is a 3/4 Legendary Elf Warrior (creature) with Haste. It costs 2 colorless, 1 red, and 1 green mana to cast.

Whenever creatures you control attack, while this Legendary Elf Warrior is on the battlefield, you may add that much mana (in red or green) to your mana pool for the remainder of your turn.

Now, how cool is that? An aggro creature slash mana source. That’s a real winner in our book! 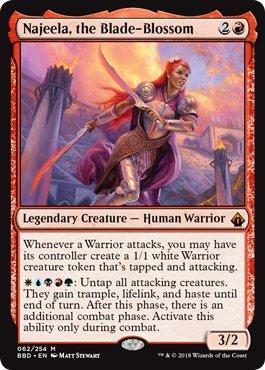 Najeela, the Blade-Blossom is a mythic rare red card. It costs 2 colorless and 1 red mana to cast.

A 3/2 Legendary Creature, Najeela is a Human Warrior with aggro abilities.

Whenever a warrior attacks, the owner may create a 1/1 white Warrior creature token tapped and attacking (even if it’s not yours).

Further, pay 1 of each mana color and untap all attacking creatures as well as grant them Trample, Haste, and Lifelink. 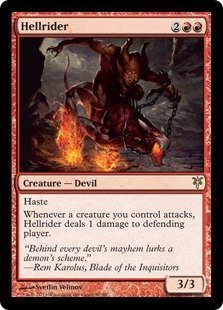 The sixth card on our list of the best Aggro creatures MTG has to offer is the Hellrider. A rare red Devil, Hellrider is a 3/3 creature with a casting cost of 2 colorless and 2 red mana.

Hell rider comes into play with Haste and can attack or block the same turn that you bring him onto the battlefield.

Further, whenever a creature you control attacks, Hellrider deals 1 damage to the defending player.

Talk about a powerful pinger!

7. Karlov of the Ghost Council 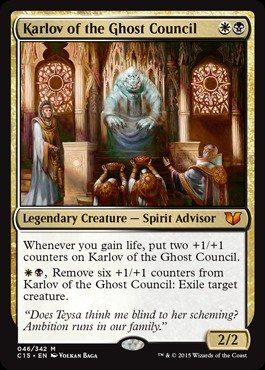 Karlov of the Ghost Council is a 2/2 Spirit Advisor Legendary Creature with a casting cost of 1 white and 1 black mana.

Whenever you gain a life point, you may put 2 +1/+1 counters on Karlov. The counters are permanent.

Pay 1 white and 1 black mana and remove  6 +1/+1 counters from Karlov and you may exile any creature on the battlefield.

How’s that for getting rid of big nasty creatures your opponent controls? 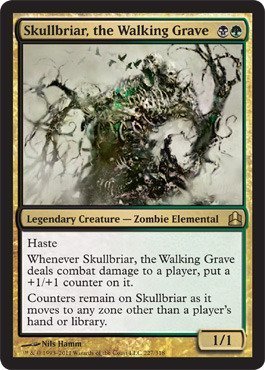 The 8th card on our list, at first glance, appears to be a peon, with 1 power and 1 toughness. However, that couldn’t be further from the truth.

Skullbriar, the Walking Grave is a Legendary Zombie Elemental with Haste, and whenever it deals damage to another player, you may put a +1/+1 counter on the card.

The bonus counters remain on the card no matter what zone it moves to (aside from hands or decks). 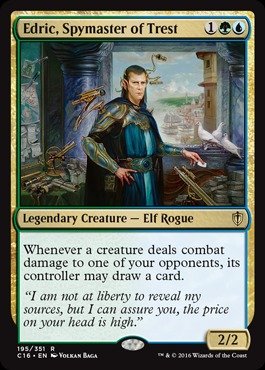 Number 9 on our list is a 2/2 multi-colored green and blue Legendary Elf Rogue creature card. It has a casting cost of 1 colorless, 1 green, and 1 blue mana.

Whenever a creature deals combat damage to an opponent, that player must draw a card.

It may be a bit underhanded, but Edric, Spymaster of Trest helps you Mill your opponent’s decks.

If the enemy wants to attack you, with multiple creatures, they’ll have to burn through their deck . 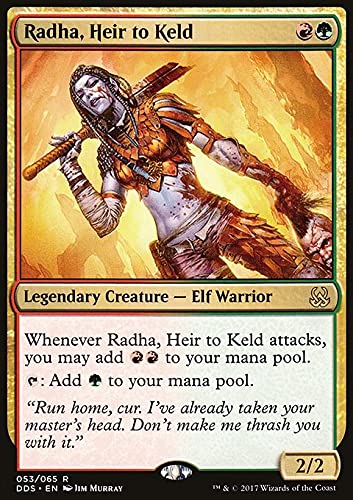 Radha, Heir to Keld is the last card on our list of the top 10 best aggro creatures MTG has made to date.

A rare green and red multi-colored creature card, this 2/2 is a Legendary Elf Warrior. Its casting cost is 1 red and 1 green mana.

You may use Radha as a mana source by tapping her anytime to add a forest to your mana pool.

Whenever Radha, Heir to Keld attacks, you get to add two red mana to your pool for the rest of the turn.

What Makes Aggro Creatures In MTG So Good?

When creatures attack, Aggro abilities are triggered. Aggro creatures are extremely useful in MTG because everyone has to attack. That’s why Aggro creatures work well in practically any sort of MTG theme deck that there is.

How Exactly Do You Use Aggro Abilities In MTG?

Aggro abilities are simple to use; simply attack your opponents and the abilities come to life. Sometimes there are additional costs, or stipulations, attached to Aggro abilities. But, for the most part, all you need to do to use Aggro abilities in MTG is attack with your creatures.

Are Aggro Creatures In MTG Worth It?

Aggro creatures are among the very best in MTG. Creatures are meant to do one of two things; attack or block. And, there are few ways to win the game without attacking. So, if you’re going to be attacking anyway, why not stack your deck with Aggro creatures?