Imagine you’re playing a game of Commander with a group of friends. You’re failing to draw the cards you need – they might be too expensive for you to cast now, not what you’re looking for, or just weak for where you’re at in the game. You opponents, on the other hand, have built up scary and impressive boards.

If you don’t do something soon, you’re going to lose. What are your options?

This is exactly when you need a board wipe. In the event you’re new to the game or are looking for suggestions, we’ve created this guide to the best MTG commander board wipes, and we’ll also be answering a few of your most common questions regarding board wipes in general.

Use These Links to Navigate this Guide >>
What is a Board Wipe in MTG?
Best MTG Commander Board Wipes
Board Wipe FAQs
Wrap Up

What is a Board Wipe in MTG?

We’ll begin by answering the most basic question: what is a board wipe in MTG?

A board wipe is defined as a card that eliminates all of some aspect of the players’ battlefields. They may target specific types of cards, such as artifacts, creatures, or enchantments. They can be an equalizer, destroying cards for all players, or they can be one-sided, destroying your opponents’ cards and leaving yours intact.

Basically, a board wipe wipes the board. This may seem inconvenient, but sometimes it’s necessary to prevent someone from winning the game or it’s necessary for resetting the playing field. These cards are usually a must-have in any Commander deck as a sort of failsafe. You may not play them, but it’s always nice to have them there.

Some colors are better with board wipes than others. You’ll notice that we didn’t include any green board wipes on this list because green as a color doesn’t do board wipes very well. It’s not really in green’s color pie, and the few board wipes it does have are narrowly focused, often targeting very specific things such as creatures with flying.

Although easily one of (if not the most) powerful color in Magic, blue also lacks board wipes, for the most part. It does, however, have Cyclonic Rift, which we’ll touch on in more detail later. 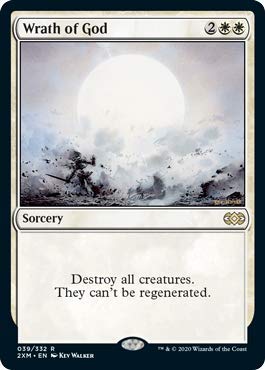 When it comes to board wipes, white is one of the strongest colors in the game. This is white’s domain, and nowhere do you see that as clearly as with Wrath of God.

It’s a well-known and classic board wipe. It works wonders when your opponents have tons of creatures on the board – especially with token-theme decks that are designed to generate armies of creatures in tokens. 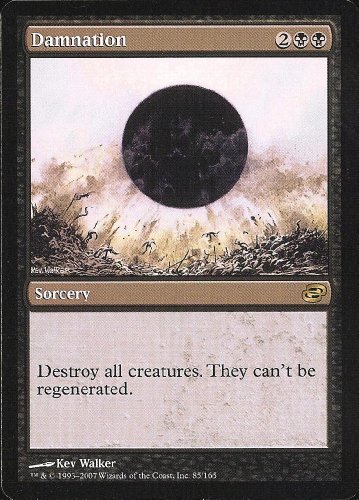 In a nutshell, Damnation is just a color-shifted version of Wrath of God. It’s fair to say that black as a color is another strong contender in the arena of board wipes, given that the color often focuses on destruction and decay.

If you’re running a black-white Commander deck, consider having both Damnation and Wrath of God in there as last resorts if possible. 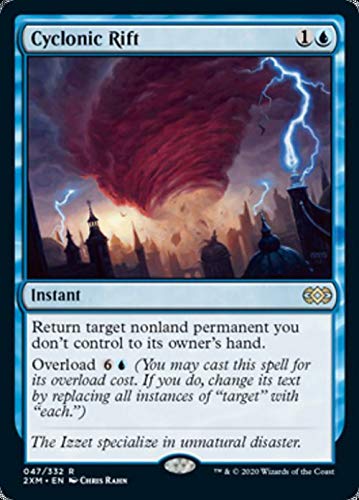 Here is one of the most powerful board wipes in all of Magic: the Gathering, and it doesn’t seem like it initially. If you only ever play it by paying its basic mana cost, one and one blue, you’ll only ever get to bounce someone’s permanent.

However, if you pay its Overload cost, you get to bounce all of your opponents’ nonland permanents back to their hands. That includes artifacts, enchantments, creatures, and even planeswalkers, which are traditionally difficult to target.

Plus, the fact that this card gives you the option of bouncing just one or paying the Overload cost for more is useful. You never know when you’ll just need a quick way to get temporarily get rid of one troublesome card in particular – such as that massive creature your friend is about to swing at you with. 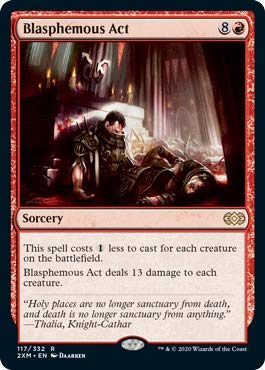 At a glance, Blasphemous Act may not seem like a board wipe because it doesn’t say anything like “destroy” or “exile.” However, it does 13 damage to all creatures, which is enough to kill the vast majority of creatures in the game.

On top of all that, Blasphemous Act costs one less for each creature on the battlefield. That doesn’t even necessarily mean creatures you own – just creatures in play. Thus, the bigger your opponents’ individual armies, the cheaper it is to cast this card. You may even be able to cast it for a single red mana if there’s a lot in play. 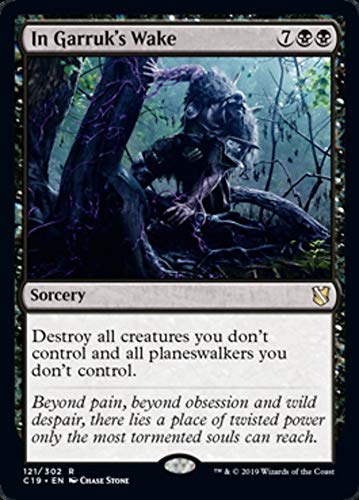 The best part about In Garruk’s Wake is that it’s a one-sided board wipe. It effectively hands you the game on a silver platter because it preserves your board while destroying everyone else’s – including their creatures and planeswalkers.

We know the mana cost looks significant, which is what makes In Garruk’s Wake weaker in most other formats where it’s legal. In Commander, a slower format, nine mana is easy to reach, especially if you’re incorporating ramp into your deck. 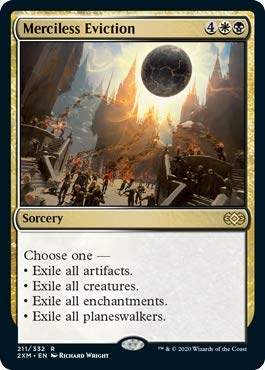 What makes Merciless Eviction so powerful is a single word: “exile.” It’s more common for board wipes to destroy, which usually gets the job done. But if your opponents have indestructible permanents or are able to bring cards back from the graveyard, destroying cards isn’t the best strategy.

Exiling, on the other hand, is the real end all be all elimination. Aside from a small handful of cards that don’t care about exiling, pretty much every card hit by Merciless Eviction is removed from the game. Your opponents cannot bring them back.

Merciless Eviction also gives you a choice. You can choose what you want to exile, so you are able to pick the option that hurts your enemies most and you the least. 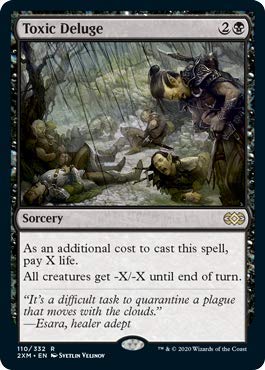 Suicide black is a popular strategy in black decks. It works just like the name implies – hurt yourself, but hurt your enemies more, and that’s exactly what Toxic Deluge does.

What makes Toxic Deluge so strong is that it lets you pay in life points to apply -x/-x penalties onto creatures. In Commander, a format in which you start with more life, paying with life points isn’t a big deal. In fact, it can actually be beneficial in the early game, when you may be short on mana.

Plus, since this card applies -x/-x rather than destroying, it gets around indestructability. 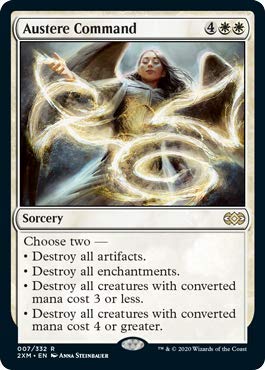 It should be surprising that we’re including another white card on this list. Austere Command is another card that’s powerful because it gives you choices.

Unlike Merciless Eviction, you get to choose more than one option, too. You can get rid of all destroyable creatures on the battlefield by choosing the third and fourth options, for example. 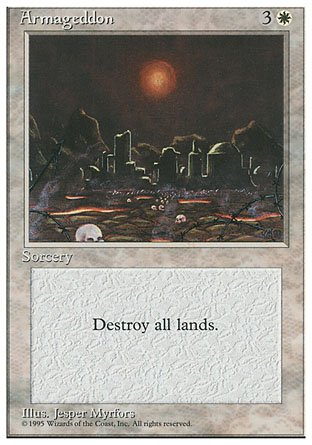 If you want to make everyone at the table hate you, play Armageddon. Nothing sets everyone else back like destroying all their lands, which make up the bulk of their mana base.

Most casual player groups have a house rule personally banning this card as a result. No one likes playing against it, and we recommend checking with your group to see if it would be acceptable prior to using it. 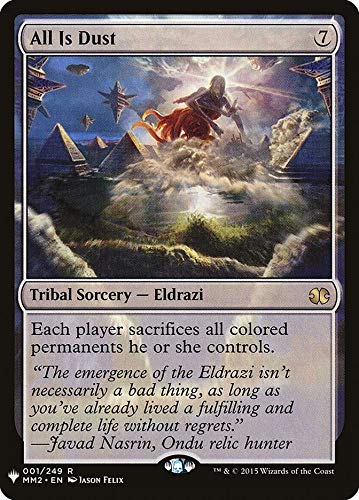 If you’re doing eldrazi tribal or playing an artifact-heavy deck, All is Dust may be the perfect board wipe for you. As you can see, it forces players to sacrifice all the colored permanents they control, which means you don’t have to get rid of any colorless ones you have.

Most people aren’t running purely colorless decks, so this will get rid of pretty much everything. This card also gets past indestructability because it forces players to sacrifice their own cards – it doesn’t destroy them.

Another benefit to this card is that it’s a tribal sorcery for eldrazi. Anything that cares about eldrazi cards thusly cares about this one, such as cards that allow you to tutor for eldrazi.

Do board wipes kill target creatures?

No, board wipes don’t kill target creatures, and that’s why they’re so effective. Abilities like Shroud and Hexproof make it so you can’t target particular creatures, and board wipes get around that by targeting all cards of a specific type indiscriminately.

Do board wipes kill Planeswalkers?

Planeswalkers are one of the trickiest permanents to target in MTG because of their card type. They’re sort of like other “players,” so they don’t count as creatures, which means many board wipes are ineffective against them.

In order to eliminate a planeswalker with a board wipe, you need to have one that specifically either says “all permanents” or “planeswalkers” in its targeting text. If it just says, “all creatures,” that will have no effect on them.

Do board wipes kill protection?

Protection is another tricky thing to get past. Protection shields you from any effects that would target and damage you, usually from a particular color.

For instance, let’s say you have a card that has Protection from red. It would be protected from cards like Blasphemous Act

that do damage, but not cards that simply say “destroy.” This is because a board wipe that says “destroy all x card type” doesn’t specifically target that card with Protection.

Do board wipes kill indestructible creatures?

The absolute weakest killing keyword a board wipe can have is a destroy. This is because indestructible cards are immune to those board wipes.

If you want a board wipe that takes out indestructible creatures, you’ll need something special. A board wipe that exiles all cards of a particular type or applies negative values would both work.

If you’re building a Commander deck, it’s never a bad idea to add a couple board wipes to it. Even if you never end up using them, they are always good to have around if someone starts quickly outpacing you. These cards are perfect for leveling the playing field when the going gets tough.