There have been many numerous unique card types developed and tested throughout Magic: the Gathering’s history. Some have been more successful than others, and see new additions in most sets, such as planeswalkers.

Other types of cards don’t achieve the same popularity and become niche pieces that were printed in a handful of sets or even a single one. A prime example of this type of card would be flip cards.

With Commander being one of the most popular formats in the game, as well as a format that has access to most cards from Magic’s history, there are some crazy possibilities for each deck. Those possibilities include flip cards.

In this guide, we’re going to take a look at the best MTG Commander flip cards. We’ll also be defining what they are and answering some basic questions about them.

Use These Links to Navigate this Guide >>
What is a Flip Card?
Best MTG Commander Flip Cards
Flip Card Questions
Wrap Up

What is a Flip Card?

Technically, flip cards are a series of 21 cards that were printed in the Kamigawa block. They are cards that have different names and abilities on both the top and bottom of the card. They come in one way, and when a certain requirement is met, they are flipped upside down so that they are a different card with new abilities.

Making a list purely out of these cards would be difficult. There aren’t very many of them, so by definition, any list picking the “best” from among them would be very limited.

Luckily, a Magic: the Gathering layman might interpret the phrase “flip card” a second way: as a double-sided transforming card. These cards have halves printed on both sides that act as individual cards. When a specific circumstance occurs or a requirement is met, they are “transformed,” allowing you to flip them over so the other side is facing up.

We are including transform cards in this list. Many people think of them as flip cards even if that is not their technical name.

Read Also: Which MTG Sets Have Lottery Cards? (And What Does that Mean?) 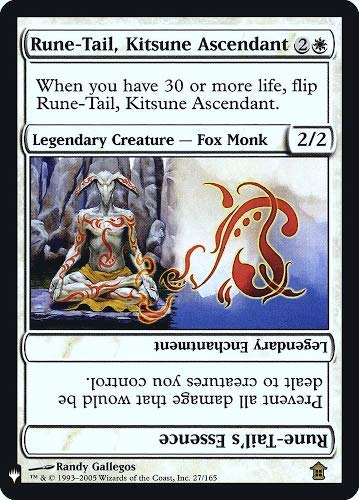 Rune-Tail, Kitsune Ascendant is the perfect card for a list like this. Not only is it actually a literal flip card from the Saviors of Kamigawa set, but it is also legal as a Commander.

It enters as a 2/2 creature. Once you have life equal to or greater than 30, it flips to become an enchantment instead. As an enchantment, it protects your creatures from damage.

It’s similar to making your creatures indestructible. Rune-Tail is a decent pick for those wanting to make mono-white creature-based decks. 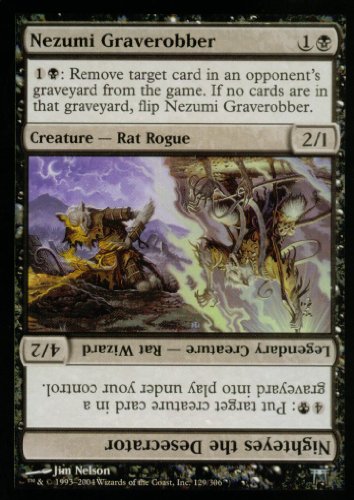 Unlike Rune-Tail, Nezumi Graverobber can’t be your Commander itself. We think, however, that it would work well in a rat tribal deck with a mono-black Commander.

Nezumi works by essentially exiling cards from opponents’ graveyards. If you attempt to use this ability on a graveyard that’s empty, you can flip the card to get an awesome rat wizard.

Nighteyes the Desecrator is a powerful card. You can use it to pay four generic and one black to steal creatures from your opponents’ graveyards…hopefully, by the time you flip it, you have plenty of creatures to choose from!

There’s a reason why Growing Rites of Itlimoc tends to be on the costlier side. It enters the battlefield as an enchantment that lets you look at the top four cards of your library and put any creatures from among them into your hand. 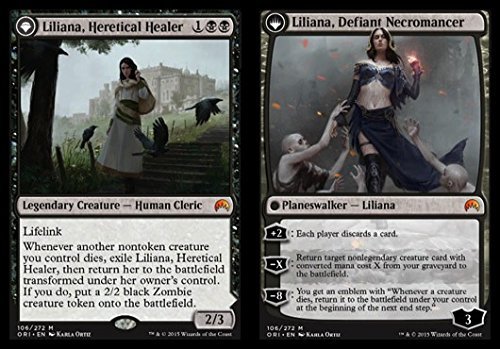 What we like about Liliana, Heretical Healer is that she can be your Commander, since she enters as a legendary creature. Once one of your creatures dies, she flips and becomes a beastly planeswalker.

As a planeswalker, her abilities include making players discard, returning a non-legendary creature to the battlefield from your graveyard, and putting all dying creatures back onto the battlefield under your control.

She’s simply a great card. Plus, the flip aspect is thematically fitting for Liliana’s background as a character in the story. 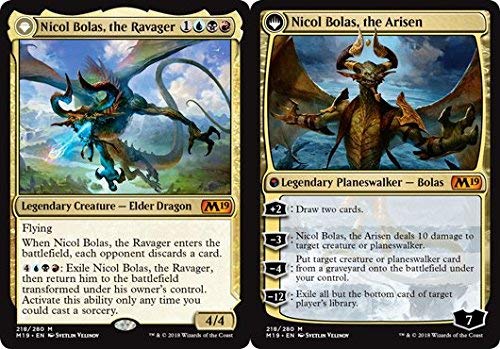 This was a card that everyone got excited for when it was released. Like the previous card, it starts as a legendary creature that is eligible to be your Commander. You can pay four generic, one blue, one black, and one red to transform Nicol Bolas, the Ravager into Nicol Bolas, the Arisen.

His other side is a planeswalker, and a nasty one, at that. He has a whopping four different loyalty abilities, already putting him ahead of most others.

If you’re playing a red-blue Commander deck centered on artifacts, we strongly recommend using Storm the Vault in it. For one thing, it helps you generate mana by creating treasure tokens whenever one of your creatures does combat damage to someone.

Once you control at least five artifacts, it gets even better. Storm the Vault flips over into Vault of Catlacan, which is a land that produces an abundance of mana. You can get any color you need or choose to generate one blue mana for all artifacts under your control. 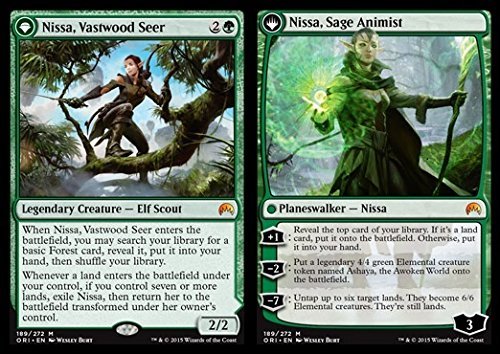 You’ve probably noticed a trend with many of the cards on this list. We’ve used a few legendary creatures that flip into planeswalkers, and Nissa, Vastwood Seer is yet another.

Nissa, true to her green color, is great for ramping into mana quickly. Once you’ve got seven lands, you transform her into a planewsalker. When she’s a planeswalker, you can use her to get even more land or draw a card, create legendary creature tokens, or turn lands into massive 6/6 creatures to attack with.

Most green decks could benefit from using Nissa, Vastwood Seer. There isn’t really a downside to using her.

This is a weird one. Journey to Eternity enters the battlefield as an enchantment you equip to a creature. Unlike most other enchantments, it doesn’t do anything to the creature.

It becomes useful once the creature it is attached to dies. Then, it becomes Atzal, Cave of Eternity, a card you can use to generate mana. You may also tap it, pay five total mana, and return any creature from your graveyard to your battlefield anew.

Best of all, it’s a land at this point. Land destruction is uncommon in Commander decks, so you’re likely to be able to keep using Atzal, Cave of Eternity for many turns to come. 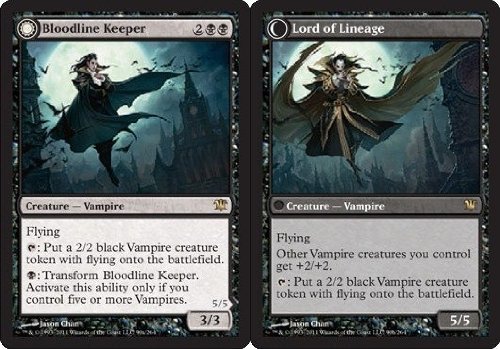 Vampires are one of the best tribes common to black. If you’ve created a vampire tribal deck, Bloodline Keeper is a strong contender for a slot in your deck.

Entering as a 3/3 flyer that can create vampire tokens is nice enough as-is. But once you have at least five vampires out, you can transform him into a beefy 5/5 flyer that gives all your other vampires +2/+2.

Of course, you can also continue to tap him to create more flying vampire tokens. Assuming your enemies don’t do whatever they can to destroy it, you can use it to build a vampire army from scratch.

Primal Amulet is a card that is just calling for a place in a spellslinger deck, or a deck designed to allow you to cast numerous instants and sorceries. For starters, it reduces the casting cost of such spells by one – an effect that’s decent by itself.

It gets a counter each time you cast an instant or a sorcery, and once it has four counters, you can flip it into Primal Wellspring. Primal Wellspring can be used to generate mana of any color, in addition to letting you copy instant and sorcery spells and choose new targets for them.

In short, Primal Amulet will eventually let you copy all of your instants and sorceries. This is an amazingly powerful effect that will have your enemies scrambling for answers.

Can flip cards be Commanders?

A Commander can generally only be one kind of card: a legendary creature card. If this is not the case, then the card must say somewhere on it that it can be used as a Commander.

Can flip Planeswalkers be Commanders?

What about a card that flips into a planeswalker? Are they eligible for the Commander slot in your deck?

The answer is the same as with the previous question. Yes, they can be your Commander, but only if they enter the battlefield as a legendary creature. They cannot be your Commander if they come out as a planeswalker, unless text on the card specifically says they are Commander-eligible in planeswalker form.

Do flip cards count as legendary?

In Magic: the Gathering, there’s a rule called the legendary rule that prohibits legendary cards of the same name from existing simultaneously on your battlefield. The reason for this is obvious: legendary cards are supposed to be legendary. If you could have tons of them out at once, they wouldn’t seem so legendary anymore, would they?

This leads many people to ask if a flip card counts as a legendary. For instance, if you were to play it, then flip it into a legendary permanent, would you be able to cast the other side of its card? Or would the legendary rule apply, preventing you from casting it at all until both sides of the card are no longer on your battlefield?

This is kind of a moot point in Commander, though, because you can’t have more than one copy of a specific card in your deck, with some exceptions. In other words, you’re not going to have two of the same flip card, so you won’t really be able to play both sides of one simultaneously.

Flip cards are a fun and unique dynamic to experiment with in Commander decks. We tried to include a small variety on this list for you to try out the next time you’re looking for inspiration.

There are numerous other fun keywords to test, as well. Infect is a particularly brutal keyword to use, and we’ve created a list of MTG artifacts with infect for you to check out.