As you dive deeper into Magic: the Gathering and build more decks, you’ll start to run into a problem: storing and transporting said decks. Many players choose to keep the boxes left over from fat packs, deck builder’s toolkits, and booster boxes as an inexpensive form of storage.

However, that doesn’t make it easy to organize and transport your decks. If you’re heading to a game night with friends or an event at a local game store, you’ll need a way to store your decks that makes them easier to take along with you.

To make transportation an easier matter, we’ve created this list of the best MTG deck boxes. Hopefully, you’ll find something that allows you to protect and carry your favorite decks here. 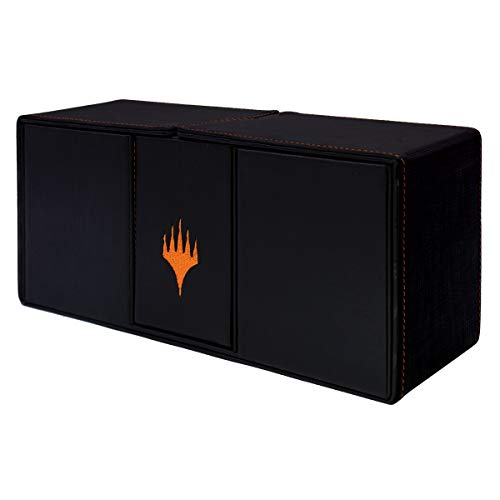 This box opens to hold up to 275 double-sleeved cards. That’s more than enough for your larger decks, including Commander decks.

As a bonus, this box comes with a dice storage compartment. This enables you to also transport life counter dice and dice to use as other counters. 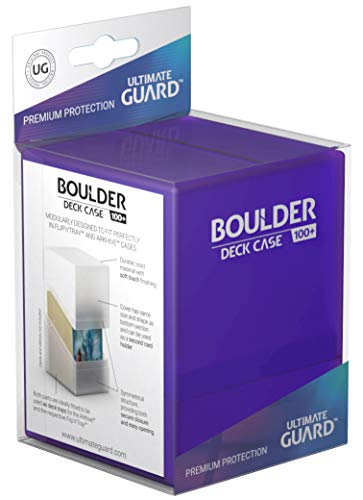 Need to store an individual deck? In that case, the Ultimate Guard Boulder Deck Case might be a better fit for your needs.

This box is designed to hold up to 100 double-sleeved or 120 single-sleeved cards. That’s plenty for the majority of your decks, including Commander/EDH.

For additional style points, the box is available in several different colors. If you’re especially organized, you can buy different colors to color code your decks or simply choose a color you find more appealing. 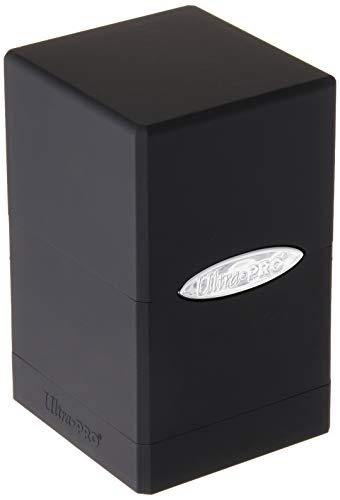 Ultra Pro is well-known for making quality sleeves. It’s not too much of a stretch to imagine that they’d make solid deck boxes like this Satin Tower Deck Box, too.

This is a heavy-duty box designed for a single deck. It’s a no-frills kind of solution to the question of storage. While it may not be flashy, it is designed to be long-lasting, protecting a single deck while you’re on the go. 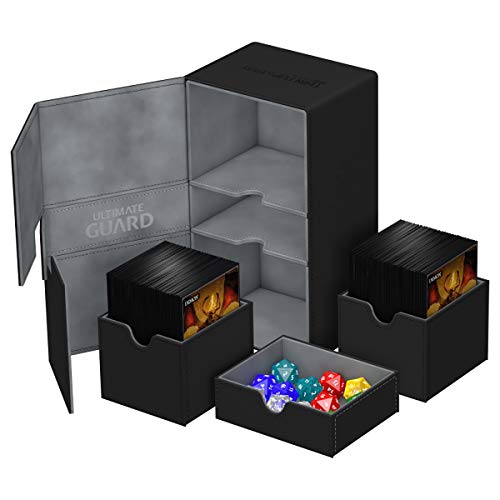 There’s a lot to love about this Ultimate Guard case. For starters, it can hold around two large decks (such as for Commander), or even more 60-card decks.

Between the two deck compartments, the box has a convenient dice tray. You can easily store a handful of d20s for your life total, or a handful of other die types to work as counters.

Plus, there’s a lot of stability in how the box closes without making it difficult to open. The lid is magnetic, sealing the box closed. However, the magnets aren’t so strong that you’ll struggle to pull them apart, either. 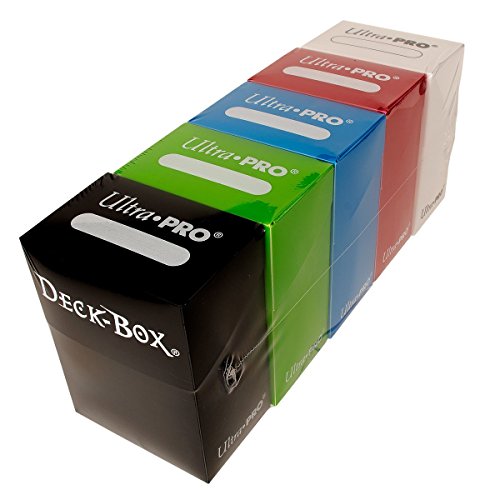 If your concern is less about transporting a couple decks and more about storing several, we’d recommend this Ultra Pro Deck Box Set. Each pack comes with five deck boxes in it, and all for an affordable price.

Every individual deck box comes with a blank field on top. This is for labeling your decks, so you don’t have to go through the hassle of opening each one to determine what’s inside it.

Furthermore, since they’re available in different colors, you can color code the decks inside them. For example, if you have a green-themed deck, you could keep it in the green deck box.

We will admit that these aren’t the sturdiest boxes on this list. However, they’re perfect in terms of an affordable method for storing numerous decks. 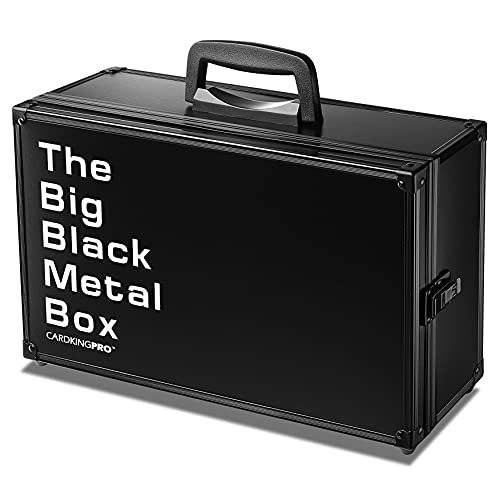 Deck storage and transport options get interesting when there are options like the Big Black Metal Box. The name of this carrier case conveys just about everything you need to know about it.

It can fit a massive number of cards – up to 2,500, which is larger than some beginners’ entire collections. It’s not as if you mix all those cards together, though; there are dividers in between each row in the box, allowing you to organize your decks accordingly.

You may need to purchase smaller dividers to go in the rows themselves to separate each deck. However, once you’ve done that, the carrier handle makes it a breeze to bring potentially dozens of decks with you. 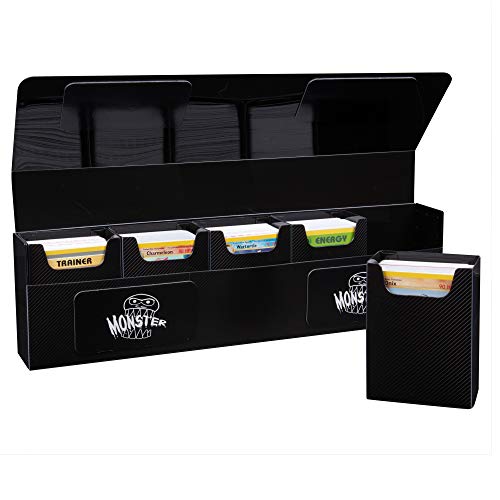 Looking for something a bit more budget-friendly that can still carry several decks? We’d recommend checking out the Hydra 5-Compartment Riveted Deck Box.

As the title implies, the box has five separate compartments for five decks. Unfortunately, the official description doesn’t say exactly how much each compartment holds. Customer comments indicate they’re able to fit about 60 sleeved cards in the compartments, so this may not be a good solution if you mainly play Commander.

However, it could still be a fantastic solution for those who play 60-card formats like Standard. 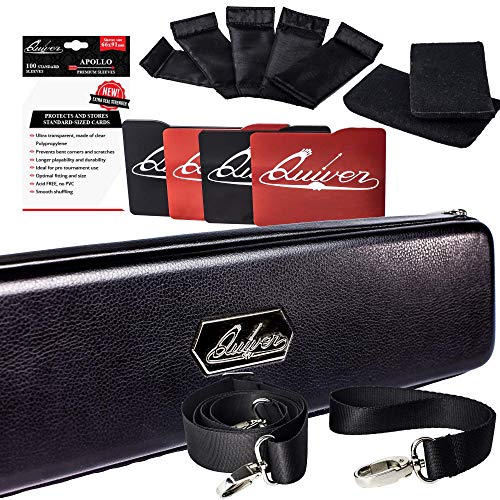 If you’re looking for a deck box that will make it possible for you to carry multiple decks in style, the Quiver Time Collector Card Carrying Case could be exactly what you need. It’s made from durable material with a removable strap that you can use to sling the box over your shoulder.

To be specific, the case is made from PU leather. This means it’s resistant to water damage, granting your cards reliable protection from the elements.

How many cards can you expect it to hold? You’ll be able to fit roughly 1,000 un-sleeved cards in it, which is more than enough room for multiple decks. Furthermore, it comes with separators and dividers so you can organize the decks inside it. 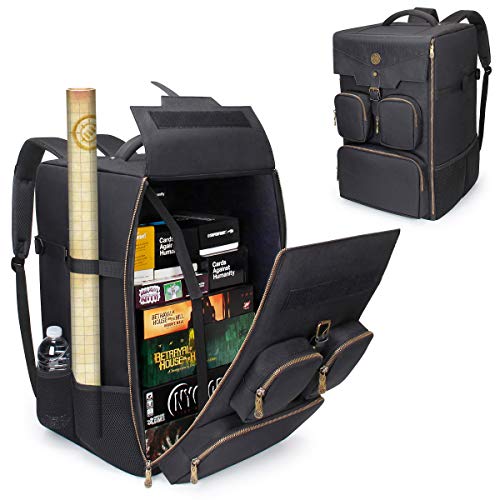 The Enhance Board Game Backpack takes game transport to entirely new extremes. It’s not technically designed specifically for card transportation, but it has more than enough room to be used that way.

There’s only so many ways you can reinvent the deck box, and we feel as if this one offers a lot of innovative features. For example, it has straps and compartments that can be used to hold playmats.

On the front, it has zippered compartments that can be used to store dice, life counters, or anything else you’d like to have on hand.

Perhaps the greatest flaw here is that it doesn’t have separated pockets inside for storing decks – it only has a one large strap to hold bigger boxes in place. You will need to have your decks stored in boxes that can be lashed into place inside the backpack. 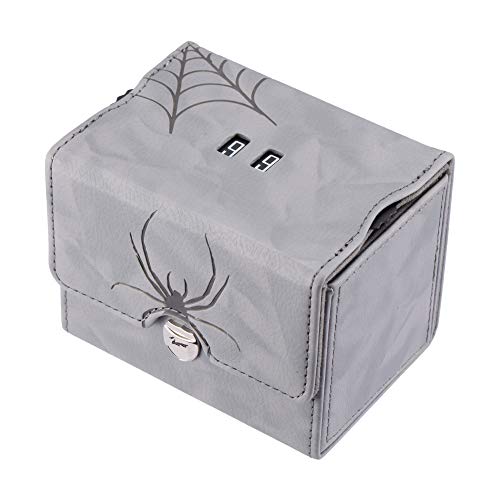 Boxes like this Zoopin Leather Deck Box are what we think of when we picture a simple, high-quality deck box. It’s not designed to hold several decks at once – just one deck consisting of 80 sleeved cards.

However, it’s made from soft and durable material. It also has an integrated life counter dial on the lid so you don’t have to use dice which can easily be misplaced or fall off the table.

Furthermore, the box is available in multiple colors. There’s sure to be a color you love or one that helps you better organize your decks.

What to Consider When Choosing a Deck Box

A deck box’s core function is to protect your decks and make them easy to bring with you. Material will be a massive factor in these considerations.

If all you want is a box to separate your decks from each other, you might be fine with a thin, plastic box. On the other hand, if you’re searching for something sturdier to protect more valuable decks, you’ll want something with thick, rigid sides made from a tougher material.

Leather lined with fabric, metal, or extra-thick plastic all work in this regard. You can check the description to confirm which materials the box is made from.

The next most important consideration as far as deck boxes go will be size. You want to be sure it actually fits your deck, otherwise the point of the deck box is defeated.

It’s also important to think about because you’ll want to be able to comfortably carry it. Consider whether you want something large enough to hold multiple decks, or if you’d rather have something that you can potentially fit inside larger cases.

Generally, you can tell exactly how many cards a deck box can hold just by looking at the product description. If it’s not there, customer reviews will typically mention how many cards they could fit into the box.

Deck boxes aren’t just used for transportation. If that were the case, their looks would be a secondary consideration, provided the box itself was durable and portable.

However, deck boxes also play a huge role in the organization of your collection. For this reason, picking deck boxes in particular colors or styles may be important. You can even get deck boxes with certain card art printed on them, so you can match them up with the deck inside.

Even if the organizational aspect isn’t the most important consideration for you, you might simply want a deck box that looks good. This isn’t a shallow consideration; your favorite decks deserve a good home when they’re not in play.

Obviously, these accessories aren’t a dealbreaker. What matters most in the end is that you get a solid deck box.

Even so, these accessories might be important in your decision if you’re torn between multiple options. Between a plain deck box and one with a life counter built into it, for example, the one with the life counter may be more desirable.

There are tons of amazing deck boxes out there. If you’re searching for a stylish, durable, and portable way to organize your decks, you’ll have no shortage of options.

Our personal favorite option on this list is the Quiver Time Collector Card Carrying Case. It checks all the boxes, including attractive style, portability, and holding lots of cards. What’s more, it comes a bunch of accessories, including sleeves, a strap, and separators.

You'll also want to learn how to protect your individual cards. Check out our list of the best MTG sleeves for foils.