Looking for an easy theme to build a deck around? Tribal decks are among the simplest to make, because the idea behind them is beginner-friendly: add as many cards as you can that support a specific kind of creature.

Elves are one of the most populous tribes in the game. As such, making an elf deck is relatively easy and oftentimes quite powerful.

We’ve already done a post for the best elf Commanders. In this guide, we’ll instead be looking at the best MTG elf cards in general that you can use to inspire your next elf deck.

Use These Links to Navigate this Guide >>
What are Elves like in Magic: the Gathering?
Best MTG Elf Cards
Common Questions about Elves in MTG
Wrap Up

Have you watched a high fantasy movie, read a fantasy novel, or played a fantasy-based tabletop game like Dungeons and Dragons? If so, then you already have some idea what elves are like in the universe of Magic: the Gathering.

We won’t dive into details about the lore behind them, or what they look like. Instead, we’ll discuss their general mechanics in the game.

Elves in Magic: the Gathering are overwhelmingly centered in green mana. You can find elves in just about any color, but green is most common.

As far as mechanics go, elves tend to do a couple things: create tokens or create mana. Some elves will even buff other elves, making a powerful elven army even stronger. 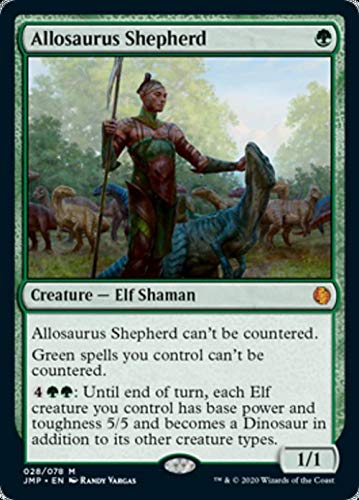 Allosaurus Shepherd made an appearance on our list of the best MTG green creatures, and with good reason. He’s a good card in general – not just for elves, although he’s good for elves, too.

First, no one can counter him. Then he makes it so none of your other green spells – which elves tend to be – can be countered, either.

As the cherry on top of the overpowered sundae, you can turn every elf on your battlefield into a 5/5 elf dinosaur. Given that elves tend to have a low power and toughness, this means you are likely giving them a much-needed boost. Allosaurus Shepherd is a strong finisher card. 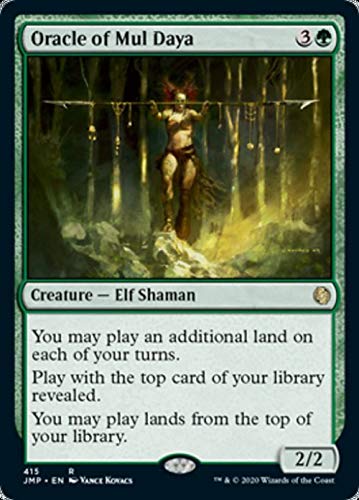 One thing elves are famous for in the game is ramping, or building up a large pool of mana. If you can outpace your opponents’ ability to produce mana, you can cast your most expensive spells before they can.

Oracle of Mul Daya can help you with that. It will let you play one extra land on your turn – so, two lands per turn, which is likely going to be double what your enemies can.

She also lets you play with the top card of your library revealed. This allows you to see what’s coming next, so it’s like having an extra card in your hand. 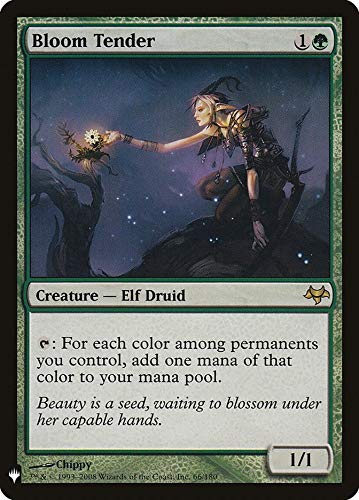 With Bloom Tender on the battlefield, you can tap for a single mana of every color among the permanents you control. It’s nothing more than what players affectionately call a mana dork, or a creature you can tap for mana, so it’s not likely to be something you’ll want to use to attack or block.

Remember, though, that building up mana before everyone else is a major advantage. Bloom Tender will help you get to a point where you can cast better spells more quickly. 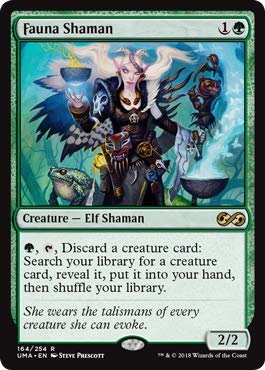 Having cards you don’t need in your hand can be frustrating. Magic players everywhere know what it’s like to draw into something that’s worthless at the time you draw it, especially when there’s pressure on you to draw a solution to a threat.

Fauna Shaman is there to help you shape your hand into something much more useful. You can pay a green mana and tap it to discard a creature card, then search your library for a specific creature to put in your hand.

In other words, it essentially lets you hunt for the perfect solution to a threat on the battlefield rather than hoping you’ll draw into something useful. 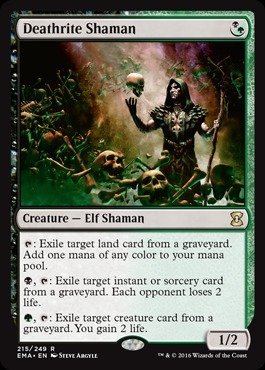 If you’re looking for some utility, Deathrite Shaman is exactly what you need. To begin with, it’s incredibly cheap to cast, available to you for only a single green or black mana.

When he’s finally out on the battlefield, he can do three different things for you, but they all involve exiling something from a graveyard. Exile a land to get mana of any color, exile an instant or sorcery to drain a couple life from opponents, or exile a creature to gain life.

Best of all, Deathrite Shaman’s text doesn’t specify which graveyard. That means you can banish things from opponents’ graveyards at your leisure. 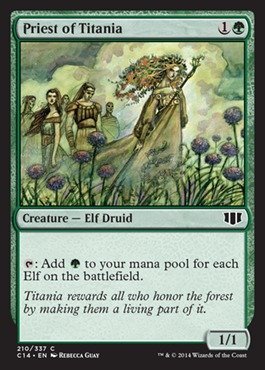 Now, if you what you want is some crazy ramp, consider adding Priest of Titania to your deck. Elves are great at making elf tokens. And even if you don’t have a lot of elf tokens, you can usually cast elves for a relatively low mana cost, so you can still have tons on the battlefield.

This means that if you have a friend you know is going to play an elf deck, using Priest of Titania will be even more effective against them.

What’s more, it will expand your mana pool. Tap Elvish Archdruid to add a green mana to your pool for every single elf you have. It’s like a one-sided Priest of Titania. 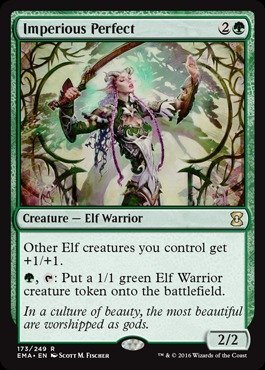 Virtually any elf tribal deck should have Imperious Perfect in it. She’ll buff each elf you have by giving them a nice +1/+1 counter.

But that’s not all she does. On top of making all the elves you already have stronger, she’ll generate even more elves for you with her second ability. Combined with the other elves on this list that boost your elves, you can see how quickly an elven stampede would become effective.

Unfortunately, Norwood Priestess isn’t that easy to find these days, so we weren’t able to link to one. If you can get your hands on one, however, she’s perfect for any deck that features large, expensive creatures.

Using Norwood Priestess, you can effectively get around mana costs that would otherwise be restrictive. She allows you to put any green creature you have onto the battlefield once per turn without paying its mana cost.

Elves tend not to be expensive in terms of mana, so we don’t know if we would recommend her for an elf deck. But for any deck featuring large green creatures, she’d be a real advantage.

Circle of Dreams Druid is not available right now because it’s from a set that is not currently for sale. We look forward to this one coming out, though, because we anticipate it’s going to hold its value pretty well in the long run.

The biggest weakness here is that it costs three green mana to cast. That can be a pretty restrictive cost in multi-colored decks.

Common Questions about Elves in MTG

What are the best elf cards for Commander?

What makes an elf card good for Commander/EDH depends on what kind of strategy you’re hoping to incorporate. If you’re doing elf tribal, for instance, consider getting elves that give +1/+1 counters to all your other elves, such as .

Elves are also fantastic for ramp. Adding cards like Priest of Titania will likely net you a large amount of green mana. She’s most effective in elf-specific decks, though, since she generates mana for every elf on the battlefield.

If your deck isn’t focused specifically on elves, consider adding something like Circle of Dreams Druid or Norwood Priestess. These cards don’t care if you’re using other elves or not – they’ll either give you mana for your creatures or let you put large creatures onto the battlefield.

What is the best elf planeswalker? 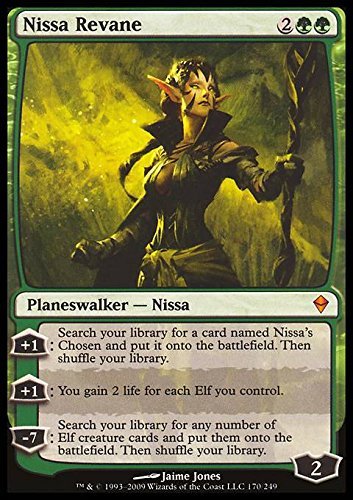 Planeswalkers aren’t creature cards, so they’re not technically ever elves. In terms of their art and the lore behind them, though, they can be elves.

That being said, we’re defining elf planeswalker as a planeswalker card that specifically benefits elves. In our opinion, the best one is Nissa Revane, pictured above.

She has two different +1 loyalty abilities. One will let you search for Nissa’s Chosen, a specific card, and put it onto the battlefield. The other will let you gain life for every elf you have out.

The real kicker is her last ability, though. If you can get to it, you can -7 her to put as many elves from your library onto the battlefield as you want without paying their mana cost.

Elves have consistently been one of the strongest tribes in Magic: the Gathering. They are both numerous and powerful, giving you the benefit of large numbers and ramp.

Fortunately, elves aren’t the only way to ramp into mana. If you need help getting a stabler mana pool, consider adding some of these mana rocks to your deck.