If you’re looking for a unique tribe to build your next Magic: the Gathering deck around, you really don’t need to look any further than faeries. And if you think faeries are weak just because you picture them as tiny, winged creatures, you honestly couldn’t be more wrong.

To help you get started on building your faerie deck, we’ve created this list of the best MTG faerie cards. We’ll also answer some common questions people have about this tribe.

Use These Links to Navigate this Guide >>
What are Faeries Like in Magic: the Gathering?
Best MTG Faerie Cards
Common Questions about Faeries in MTG
Wrap Up

It’s true that, in terms of appearance, faeries look the way you’d expect them to in the game. They are indeed small, winged people. Also like faeries from other legends, faeries in Magic: the Gathering are known for being mischievous pranksters.

When it comes to playstyle and strategy, though, faeries are a bit harder to describe. Faerie creatures tend to have a lot of interaction, with many that have enter the battlefield effects or activated abilities.

In general, they have flying, and they usually don’t have a very high power or toughness. They also often have flash, which means you can cast them at any time. This makes them excellent blockers, as someone might attack you thinking you’re wide open when you really have a faerie in your hand you can throw in at the last minute.

Oona, Queen of the Fae 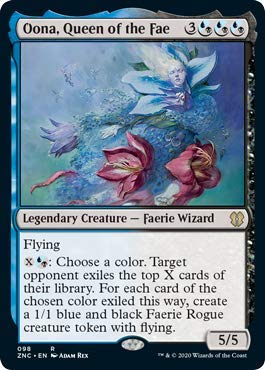 We picked Oona, Queen of the Fae for our list of the best blue black Commanders, and we just have to include her again in this list. As one of the best options out there for a faerie Commander, she deserves a mention in any list of the greatest faeries overall.

For one thing, she’s simply a good body to have on the battlefield. With flying and power and toughness stats of 5 apiece, she can deal a decent amount of damage or block moderately sized creatures.

It’s her second ability that’s most important, though. By paying one black or blue mana, and any number of additional mana, you can choose a color and force an opponent to exile cards from the top of their library equal to the additional mana you paid. You’ll create a single faerie token for each exiled card that was the color you chose.

Basically, you’re milling opponents and making tons of tokens. There is no downside to Oona, Queen of the Fae. 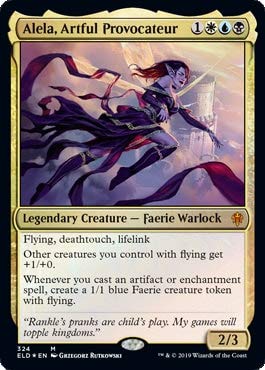 If you want a card that’s a bit more aggressive in your faerie deck, Alela, Artful Provocateur could be a great choice. In terms of mana, she’s much cheaper than Oona, and she’ll give you flying, deathtouch, and lifelink.

Additionally, she buffs all your other flying creatures with +1/+0, allowing them to hit marginally harder. What’s more, every time you cast an artifact or enchantment, she will create a blue faerie token with flying. She literally makes faeries for you, and she buffs them all automatically.

The key here is to play her with tons of artifacts and enchantments to reap the most benefits from her faeries. There are tons of enchantments that have a lot of synergy with her, such as All that Glitters or Intangible Virtue. 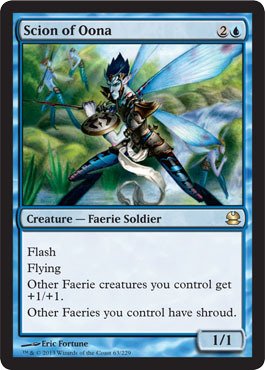 Scion of Oona is so good that it should be in just about every faerie deck you have. To see why he’s so good, we’ll need to dissect his abilities.

To begin with, he has flash and flying, which is honestly par for the course for faeries. Things get interesting when you get to this third ability, which boosts all other faeries you have on the battlefield. This includes faerie tokens generated by creatures like Oona and Alela.

To top that off, he’ll protect all your faeries by giving them shroud, which means opponents cannot target them with destructive spells. The drawback to shroud, though, is that it means you also can’t target your own faeries with spells, so you can’t attach equipment to them or boost them using enchantments. 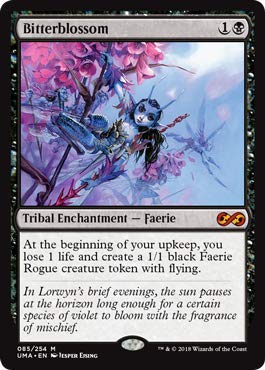 Bitterblossom is another must-have in faerie decks. It’s a tribal faerie enchantment that will automatically create a new faerie token for you at the beginning of each of your turns. It will help put some bodies on your battlefield, so you have both attackers and blockers.

There’s a small drawback of it also sapping one life point from you each turn, but as we said, that’s a small drawback. It’s not too difficult to use other methods to make up for that by gaining life, such as using life gain cards or by giving your faeries themselves lifelink. 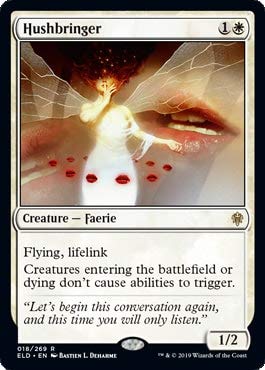 If you can get past the strange art on it, Hushbringer is actually an amazing faerie card. She’s a prime example of faerie cards that interact with other card types with her extremely oppressive ability.

Enter the battlefield effects occur when something enters the battlefield, and some cards also have a similar effect that occurs when they leave the battlefield. There are numerous decks built around using as many cards like these as possible, especially when cards like Panharmicon can cause those abilities to trigger multiple times.

Hushbringer puts a stop to that. With her out, enter the battlefield and leaving the battlefield abilities will not be triggered. This means any of your creatures with those abilities also won’t be able to trigger, though, so you’ll need to weigh the pros and cons carefully before casting her. 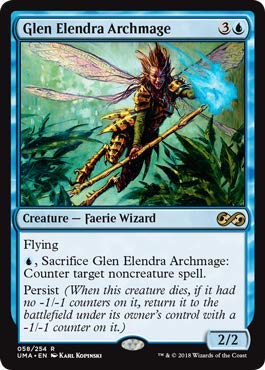 We’ve said it many other articles, and we’ll likely continue to say it: Magic is a game of interactions. You generally should not be sitting back and letting your opponents do whatever they want. Counterspells are sometimes necessary to save you and your creatures.

Glen Elendra Archmage helps fill that slot in your deck. It is both a creature and a counterspell at the same time, so you can use it as a blocker or pay one blue mana to sacrifice it and automatically counter a noncreature spell.

The kicker here is that it also has persist. Once you sacrifice it, it will automatically come back with its power and toughness reduced by one. That means you’ll have another opportunity to use it as a counterspell all over again. 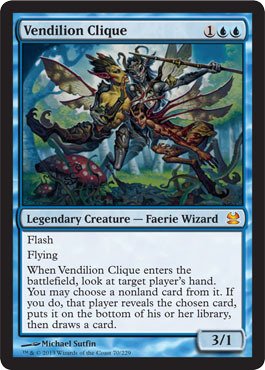 Here is an example of a faerie card with an enter the battlefield effect, so you’ll want to be sure you don’t have Hushbringer on the battlefield if you cast it. When you do cast Vendilion Clique, you get to look at an opponent’s hand and force them to put one card on the bottom of their library, drawing a card as a replacement.

Shaping your own hand is a massive benefit. Getting to shape an enemy’s hand is even better because you get to eliminate any upcoming threats. Since you also got to see that person’s hand of cards, you’ll have an idea of what they’re working with ahead of time, allowing you to formulate a strategy in response. 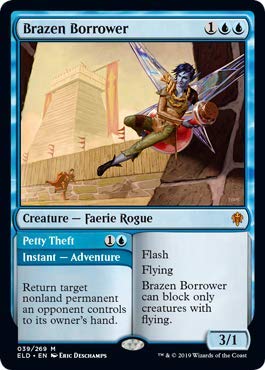 At a first glance, Brazen Borrower can be a bit confusing, so this one may be harder to explain. The reason the card is split into two halves is due to the Adventure mechanic that came from the Throne of Eldraine set.

You can pay the Adventure cost to send Brazen Borrower “on an adventure,” effectively playing it like an instant spell instead. It will then bounce one of your opponent’s nonland permanents into their hand.

You can also then pay the creature cost at the top to get the creature aspect of the card. Since he has flash, you can cast Brazen Borrower as a creature at any time. In a nutshell, the reason he’s useful is that he gives you so many options. 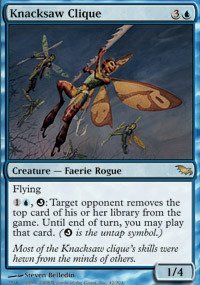 Your enemies will hate Knacksaw Clique the moment it hits the battlefield. It is essentially like having an exile on a stick that you can cast over and over again, except it exiles cards from the top of opponents’ libraries.

To add insult to injury, you get to play that card you exiled until the end of the turn. Not only are you removing a card from an opponent’s library, but you get the opportunity to steal it from them.

Knacksaw Clique is evidence of how mean faeries can really be. 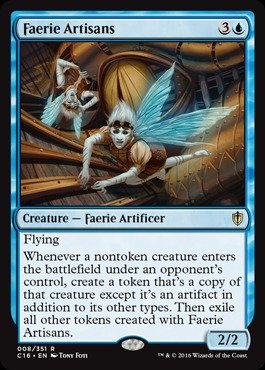 The Faerie Artisans card is essentially a chameleon. Whenever an opponent casts a creature spell, Faerie Artisans will make a token that’s a copy of that creature for you, allowing you to benefit from each creature that enters the battlefield.

The downside is that you can only have one such token at a time. Every time someone else casts a creature, you’ll be forced to exile any other tokens Faerie Artisans created.

At the end of the day, though, you are still getting a free creature. And depending on what opponents cast, the creature in question could be a gamechanger for you.

Common Questions about Faeries in MTG

Are there any faerie lords in MTG?

The term “lord” in Magic: the Gathering is an outdated one. If someone says it, you can take it as a sign that they’ve been playing the game for awhile because it’s a term that’s not in use anymore.

There are certainly faerie lords available if you’re planning on building a tribal deck. We even included one on this list: Scion of Oona.

Why is Bitterblossom so good?

Bitterblossom is good for a few different reasons. The first one is that it’s an extremely affordable spell – for a small converted mana cost of just two, you can get it out onto the battlefield relatively quickly.

Once it’s out, it will automatically create faerie tokens for you. Even if you’re not playing a faerie deck specifically, this is a useful effect, as it populates your battlefield. You’ll be able to attack and block.

Is Bitterblossom good in Modern?

Modern is an eternal format that lets you build decks from all sets after Eighth Edition. This gives you a lot of variety to work with and means that older cards like Bitterblossom are still legal.

We do think Bitterblossom is an excellent card for any format in which it’s legal, including modern. It is especially synergistic in faerie-themed decks.

Those looking for a fun, unique, and challenging creature tribe to work with should definitely give faeries a try. They are extremely powerful creatures with an interesting magical theme that will lend any deck a little flair.

One of the biggest issues with faeries is that many of them can be quite expensive to buy, but this is true for most powerful cards in the game.