Planeswalkers are some of the strongest and most interesting cards in Magic: the Gathering. Each one represents a character in the underlying story, and they also each have their own unique abilities.

Jace Beleren is easily one of the more popular planeswalkers out there. He’s enigmatic, intelligent, and of course, strong, so it’s little wonder why his planeswalker cards are consistently well-liked.

Like with other types of cards in MTG, though, there are certainly Jace cards that are a cut above the rest. We’ll be taking a look at the best MTG Jace planeswalker cards in this guide and explaining why we chose them.

What are Jace Planeswalkers?

You don’t have to look into the lore at all to play the game. Even so, you might find yourself curious about recurring characters on the cards, including Jace.

We won’t dive too far into Jace’s backstory, since the focus of this post is on the cards themselves. If you want to learn more about him as a character, you can click on the link above.

Jace planeswalker cards are generally strong. They tend to center on card advantage – and, as we’re a fan of saying, card draw is one of the most powerful mechanics in the game. It gives you access to the rest of your deck, after all. 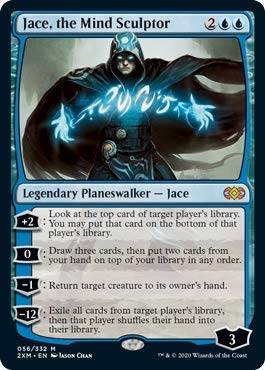 Any Magic player who’s been into the game long enough will remember when Jace, the Mind Sculptor first came out in the Worldwake set. This infamous card quickly became a staple in just about every deck, with countless players adding as many as possible depending on the format.

Because of this, Jace, the Mind Scuptor has had a bit of a checkered past. It’s been banned and unbanned throughout the course of its lifespan, which has driven its price up and down. Before putting it in a deck of your own, we strongly recommend confirming its legality on the ban list.

What makes him so good? Well, there are many things that make him amazing, but the first one is that he has four loyalty abilities. The average planeswalker has only two or three.

The abilities themselves are all excellent. You can use his first one to Scry any player’s library, including that of your opponents. His second ability makes it easier for you to shape your hand by giving you some card draw.

Finally, his last ability basically forces someone out of the game by exiling their entire library. If you can get to that point, the person in question is extremely likely to lose – unless they, by some lucky turn of events, had a win condition in their hand. 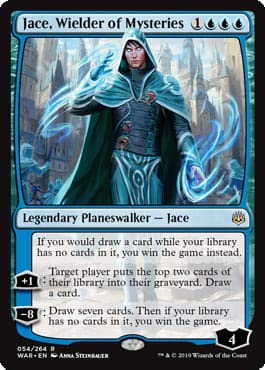 We picked Jace, Wielder of Mysteries for this list because it has a win condition built right into it. That’s right at the top of the card: you win the game if your library is empty, and you need to draw a card.

There are numerous cards out there that allow you to quickly empty your library. If you don’t happen to have any others on hand, though, Jace, Wielder of Mysteries can help you by milling two cards from your library.

Honestly, that’s still a little slow. If you’re going to have a deck with Jace, Wielder of Mysteries, consider using cards that let you draw your entire library at once like Enter the Infinite. 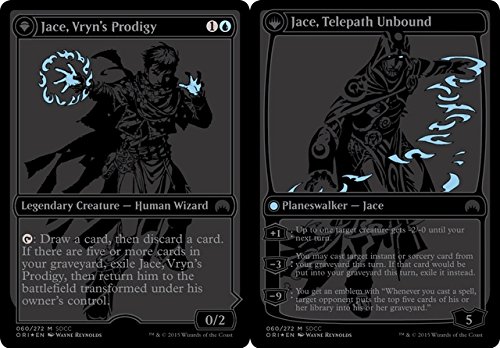 The interesting thing about Jace, Vryn’s Prodigy is that he’s the only card on this list that can technically be used as your Commander if you want. That’s because he enters the battlefield as a legendary creature.

Once you have at least five cards in your graveyard, Jace transforms into a new planeswalker called Jace, Telepath Unbound. In planeswalker form, he can debuff creatures or basically give your instants and sorceries flashback.

You’re not likely to get to his final ability, as your opponents will probably target him the moment he becomes a planeswalker. But if you do get to that point, the ability to automatically mill opponents whenever you cast spells could easily finish off some people.

Related Post: MTG Artifacts with Flashback (Do They Even Exist?) 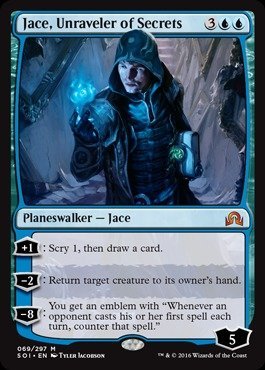 What if you had the ability to shape the next cards you’re going to draw? Jace, Unraveler of Secrets helps you do exactly that with his first ability, which lets you Scry and draw a card. Scrying means you get to look at the top card of your library, then decide whether or not you’ll move it to the bottom of the pile.

It's also nice that he can bounce target creatures back to hands. It doesn’t have to be an opponent’s creature, either; you can use the ability to bounce something back to your hand if someone would otherwise exile it on your turn.

Finally, his last ability isn’t anything to scoff at. It will automatically counter the first spell your opponents cast on their turns. This automatic counterspell will frustrate people and force them to decide which spells they’re willing to sacrifice to their graveyards. 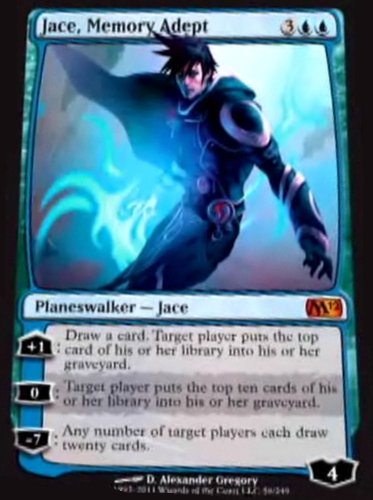 If a win condition in your deck is drawing a card when your library is empty, like with Jace, Wielder of Mysteries, it’s a good idea to use Jace, Memory Adept, too. It will let you draw a card and choose someone to mill a card from the top of their library. You can technically mill yourself if you want to or force an opponent to mill – the choice is yours.

His second ability will let you mill ten cards from anyone of your choosing. Again, that can be you if you’re using a strategy in which you want to empty your library.

Basically, this is just an excellent mill card. Each of its abilities let you choose the target, which makes it flexible.

What is the best Jace planeswalker?

Jace planeswalkers in general are pretty strong. This is reflected by their popularity and oftentimes higher price.

That being said, there is easily one particular planeswalker that most people would agree is better than all the others. That planeswalker is Jace, the Mind Sculptor.

You might have been able to tell that it’s strong just based on how much we were able to write about it. It’s an all-around excellent planeswalker. It has an above-average amount of loyalty abilities, and all of them are good.

What is the rarest planeswalker in MTG? 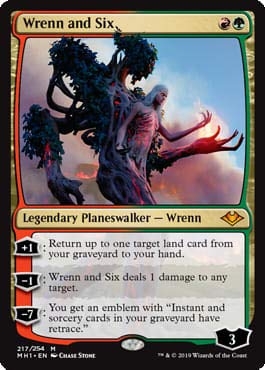 There are hundreds of planeswalker cards on the market today. You might be curious about which one is the rarest of them all.

Unfortunately, that’s a difficult question not answer. Many of the most powerful and expensive planeswalkers have seen reprints since their initial release due to their popularity and usefulness.

The rarest planeswalker, then, is one that is a combination of power, price, and possible even alternative art. One that comes to mind for us is Wrenn and Six, which has only been printed twice. Its relatively high price and restricted legality means that you’re not likely to see it in many decks these days.

Jace planeswalkers are among the most iconic ones in the game, ever since the release of Jace, the Mind Sculptor. He embodies everything that blue mana typically represents: intellect, ingenuity, and quick responses.

Want to see some more powerful blue cards? We’ve created a list of the best blue black Commanders in MTG that you can reference.