Recently, we did a guide to the best Jeskai Commanders in Magic: the Gathering, but that’s only touching the tip of the iceberg. Looking at Commanders only greatly restricts the number of cards you can look at, since Commanders can generally only be legendary creatures.

Jeskai has a bit more to offer than just Commanders. That’s why we’ve created this guide to the best MTG Jeskai cards in general.

Let’s take a look at what we picked…

Use These Links to Navigate this Guide >>
What is Jeskai in Magic: the Gathering?
Best MTG Jeskai Cards
Common Questions about Jeskai Cards
Wrap Up

What is Jeskai in Magic: the Gathering?

We touched on the topic of what Jeskai is briefly in our guide to Jeskai Commanders, but we’ll give you a quick rundown again here just in case.

When a Magic player says Jeskai, they’re typically referring to a specific combination of colors in the game. Those colors are red, blue, and white.

Decks centered around Jeskai colors tend not to rely on creatures. Instead, their focus is generally casting sorceries and enchantments – as you’ll see from a few of the cards on this list. On some occasions, Jeskai decks may also feature token generation.

You can learn more about other color combos and their habits in our guide to MTG names for color combinations.

Narset of the Ancient Way 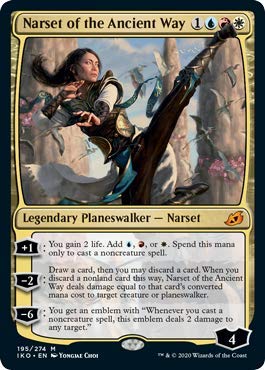 Planeswalkers tend to be very good cards, and Narset of the Ancient Way is an example. What makes Narset particularly appealing is that it isn’t difficult to reach the card’s ultimate ability, which allows you to target another player for two damage every time you cast a noncreature spell.

All you need to do is use the +1 twice, which will net you a little life gain and some mana. Said mana can be used to cast a noncreature spell, which won’t be that hard if you’re playing with Jeskai colors.

If you’re in a bind, you can use Narset’s -2 to deal damage directly to someone by discarding a card. Provided it’s a nonland card, you can deal an amount of damage equal to that card’s mana value to a creature or planeswalker. 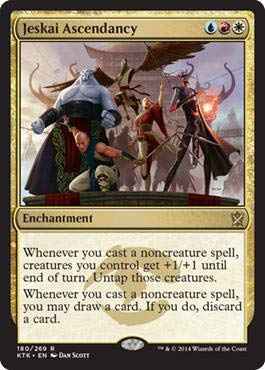 Jeskai decks are all about those noncreature spells. Cards like Jeskai Ascendancy allow you to easily support this theme by rewarding you for continuing to cast any spell that isn’t a creature.

That doesn’t mean, however, that your deck has to completely lack creatures. If you still have some in your deck, Jeskai Ascendancy will boost them and untap them for you.

Plus, a little card draw is always a good thing. You usually never know what you’re going to draw next. 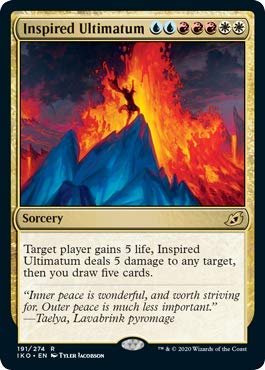 There are actually a few ultimatum cards in different colors, and the thing they have in common is that they all cost quite a bit of mana…but in exchange, they offer you some solid benefit that hurts your opponents.

Inspired Ultimatum is the ultimatum card in Jeskai colors. You can use it to gain a little life, then deal damage to someone else. On top of that, you’ll also get to draw five cards, which will probably fill out your hand.

If you’re looking for other ways to gain life, read our list of the best life gain cards in MTG. 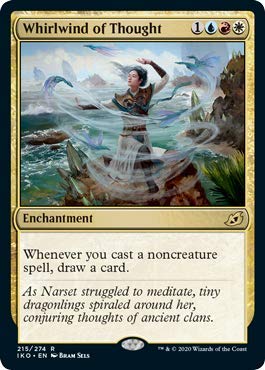 We’ll likely say this many more times in other posts: card advantage is virtually always a good thing. Sure, there are some cards that might turn this against you, such as the infamous Nekusar, but generally drawing a card is useful. 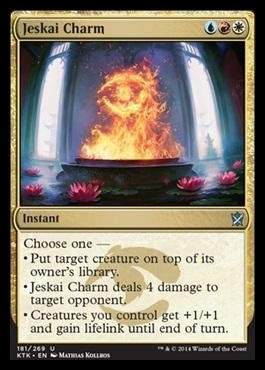 Cards that give you choices are among the most useful in Magic: the Gathering. This is why planeswalkers tend to be valuable – they have loyalty abilities that you can choose to use which may be applicable to different situations.

Jeskai Charm is a Jeskai-colored card that also gives you choices. You can force a creature off the battlefield and back into someone’s library, do four damage to an opponent, or give you creatures +1/+1 and lifelink for one turn.

This makes it an extra flexible card. You can choose a different function based on whatever your greatest need is at the time of casting it.

What does Jeskai mean?

Unlike the individual colors themselves – red, blue, and white – the word Jeskai may be something you haven’t heard before. So, what does it mean and where does the word come from?

Magic: the Gathering has a deep lore underlying the card game. The word Jeskai comes from that lore. Specifically, it is the name of one of the clans on Tarkir, which is one of the planes of existence in the game.

Jeskai is represented by the colors red, blue, and white because they bring together both cunning and combat prowess. These concepts are well represented in Jeskai-colored cards. You can learn more about them by reading this wiki page.

Up to a certain point, decks in MTG often get stronger when you start adding more colors to them. This is primarily because using more colors gives you more options to add to your deck.

Jeskai, as a three-color combination, puts more than half the colors in the game at your disposal. As a result, these decks can be amazingly powerful when they’re built correctly.