Rat cards are similar to Goblins, Soldiers, or Elves; strength is in numbers. That said, having the right Rat for the job makes a huge difference depending on what type of deck you’re up against. Read on below and discover the top 10 best Rat cards in MTG. 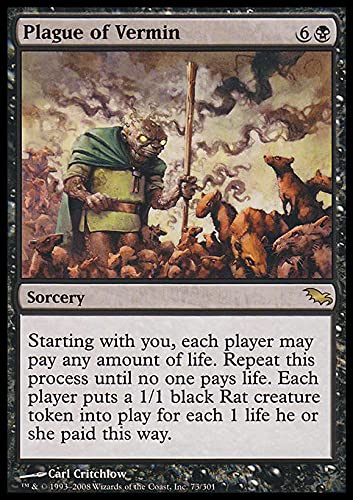 Plague of Vermin is a rare black sorcery card that costs a whopping 6 colorless mana and 1 additional swamp land to cast. That said, it is defenitely on our list of the top 10 best rat cards in MTG with reason!

Talk about a Rat trap! 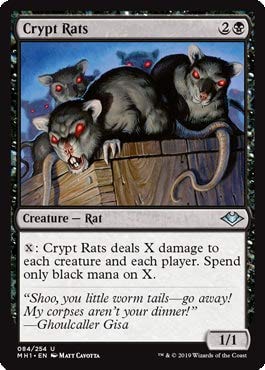 The number two card on or list of the best Rat cards is a fan favorite: Crypt Rats!

This uncommon black Rat creature may only be a 1/1 when it hits the battlefield, but you may deal X damage to each player and creature by paying X in black mana only.

That is one heck of a deal, folks! 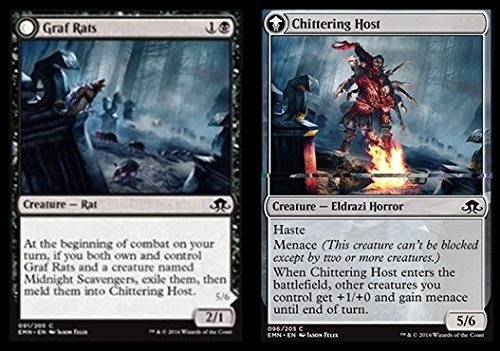 Once a grafted Rat has melded into Chittering Host, a 5/6 Eldrazi Horror, with Haste and Menace, other creatures you control receive a +1/+0 boost to power and toughness as well as Menace until the end of the turn. 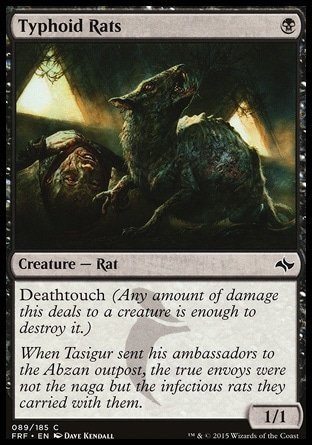 Another iconic Rat card in MTG is this 1/1 Rat creature card, Typhoid Rats. For a single swamp land, this common creature hits the battlefield with deathtouch.

While Typhoid Rats may not seem like the biggest or baddest card (because it isn’t!), having 3 or 4 of them stuffed into your Rat deck can really make a difference. That’s why it’s number four on our list. 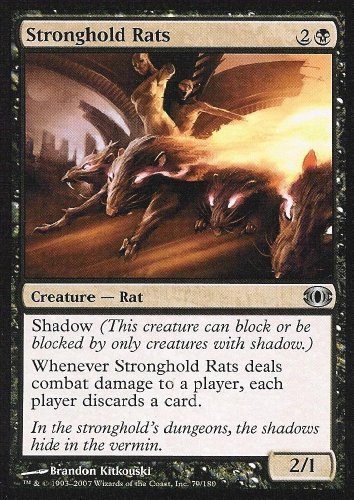 At 2 colorless mana and 1 additional swamp land, Stronghold Rats is another iconic Rat card in MTG that doesn’t seem like a big deal at first glance. It is a 2/1 Rat with Shadow (can’t be blocked except by other Shadow creatures) that forces other players to discard when it deals damage to a player.

Remember though, when play MTG with Rat decks, part of the overall strategy is strength in overwhelming numbers. You can’t overwhelm opponents, taking forever to cast huge monsters. That’s why a 2/1 Shadow Rat is also a great choice for a MTG Rat deck. 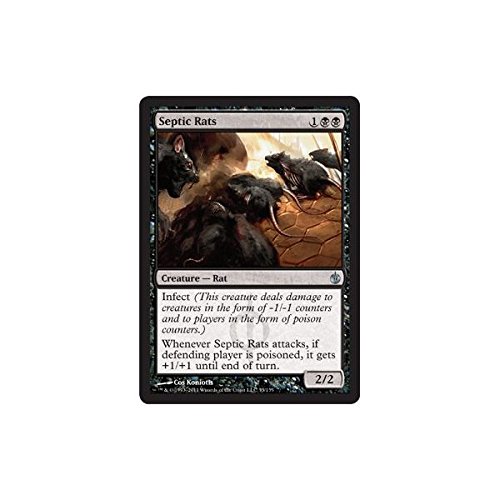 Septic Rats is another standard card for Rat decks. It isn’t the most impressive Rat, but it does play a crucial role in a great Rat deck. When the defenders are poisoned, Sceptic Rats gains a +1/+1 to it’s power and toughness for the turn.

The card is a 2/2 Rat creature, discounting anything else it makes for an affordable creature in the early to mid-game. It also has Infect, with means rather than dealing normal damage, Sceptic Rats deals damage to players as -1/-1 poison counters and -1/-1 damage counters to creatures.

7. Patron of The Nezumi 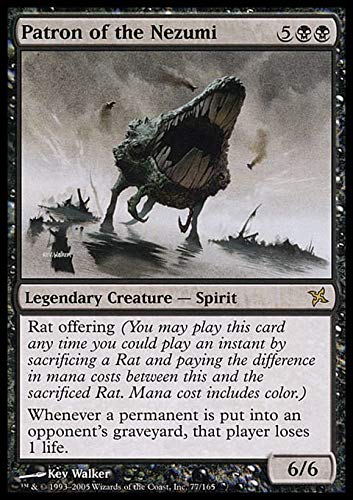 Patron of Nezumi is a massive 6/6 Legendary Creature – Spirit that costs a formidable 5 colorless mana and 2 swamp lands to bring into play. Once this rare block Spirit card hits the battlefield, permanents that go ito enemy graveyards cause them to lose 1 life.

Where does the Rat part come in? Patron of Nezumi has Rat Offering. That means you can play it whenever you could play an instant by sacrificing a Rat card and paying additional mana. Nifty, huh? We thought so too! 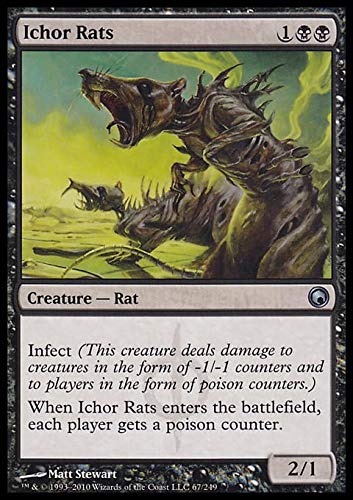 Ichor Rats is a 2/1 uncommon black Rat creature that belongs in any Rat deck. Like most of the best Rat cards in MTG, it doesn’t cost much to play. It’s mana price is 1 colorless and 2 swamp lands. 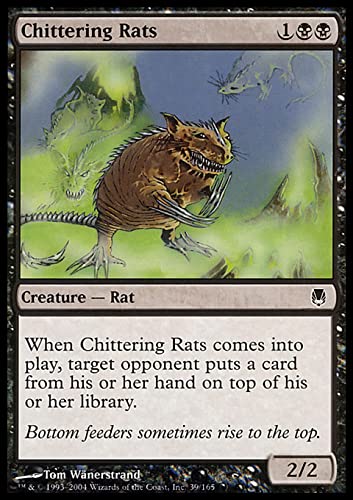 A go-to standard Rat card if ever there was one, Chitter Rats is it. At 1 colorless mana and 2 swamp lands, this 2/2 hits the battlefield ready to gnaw your opponents library to shreds.

When Chitter Rats is played, an enemy of your choice must pull the top card from their deck and place it in their graveyard. Including two or three of these guys in your Rat deck will help lend cheap muscle to your Rat pack. 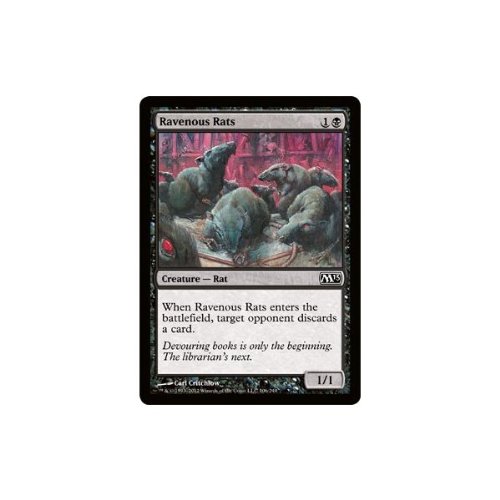 Ravenous Rats is a 1/1 black Rat creature with the low mana cost of 1 colorless and 1 swamp land. When it hits the battlefield, you pick an opoponent and they must discard a card from their hand.

Carrying three of four of these little guys in your Rat deck, along with others from this list, helps keep a steady supply of annoying and useful pests to sabotage you enemies front lines.

What are Rat Decks in MTG?

Rat Decks in MTG are libraries of primarily black cards that classify as Rat creatures. The decks typically contain numerous minor Rats with low power and frustrating abilities, and a few special Rats with higher power and toughness as well as stronger abilities.

How do Rat Decks Work in MTG?

The main strategy of a Rat deck is to overwhelm the enemy. There are numerous more advanced strategies to try, but strength in numbers in the sure way to over-run your enemies with your Rat deck. That means make sure that at least half of your cards are cheap and dispensible creatures like 1/1 and 2/2 Rats.

Is Rat Pack in MTG Good?

Rat Pack is one of the best Rat cards to us to spawn a fast army of rats and create a genuine “rat pack” to send against, or defend against, the enemy. It helps you to quickly, chealy, and efficiently, swell your ranks and out-number enemy creatures.