If you’re into all manner of things dark and gritty, black and red, also known as Rakdos, could be a great color combination to build your next MTG Commander deck around. This is an intriguing and aggressive color duo that offers a bevy of strategies that will leave your opponents burnt to a crisp.

When you’re building a Commander deck, though, one of the first things you should do is choose a Commander. If you’re not sure which Rakdos Commander to go with, we’ve made this convenient list of the best MTG red black Commanders for you to consider.

Let’s jump right into it…

Use These Links to Navigate this Guide >>
Why Do Red Black in Commander?
Best MTG Red Black Commanders
Rakdos Questions
Wrap Up

Why Do Red Black in Commander?

As we mentioned above, the combination of red and black in Magic: the Gathering is called Rakdos. The name comes from a demon in the lore, who rules over a cult.

When you consider the individual elements of Rakdos, black and red, it’s easy to guess how this pairing plays. Black represents sacrifice, death, and decay, while red represents passion, fire, and oftentimes pain.

Predictably, this means black and red together make a fast-moving, aggressive pairing. Rakdos decks are often vicious, forcing opponents to sacrifice their permanents, dishing out damage, or creating armies of creatures quickly.

Vampires and goblins are extremely common creatures in this color combination. Both can be very economical in terms of mana, so it’s easy to build tribal decks that you can start attacking quickly with. For that reason, we’d say Rakdos is probably one of the more beginner-friendly color pairs in the game, although it also offers more complicated strategies for seasoned players.

Read Also: MTG Names for Color Combinations (And How They All Work) 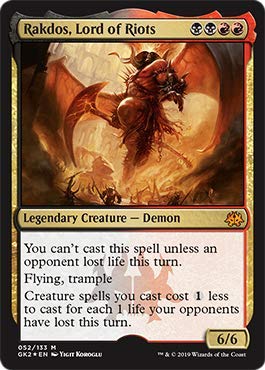 Rakdos, Lord of Riots is easily one of the most popular red-black Commanders available today. To a beginner, he may look risky – after all, he prevents you from casting spells if your opponents haven’t lost life this turn.

With red and black, however, it’s a simple matter to make your opponents consistently lose life. That being said, Rakdos, Lord of Riots gives you many other pros to work with.

For starters, he’s a beater, meaning he’s a large creature who can deal a nice chunk of damage. With flying, he can soar right over many blockers….and even if he’s blocked, with his trample, damage above any blocker’s toughness still gets through.

But it’s his second ability that matters most. For each point of damage you do to an opponent in a turn, your cost to cast creature spells is reduced by one. While this isn’t likely to make many creatures totally free to cast, it is likely to drop large parts of your library down to a single or couple red or black mana. 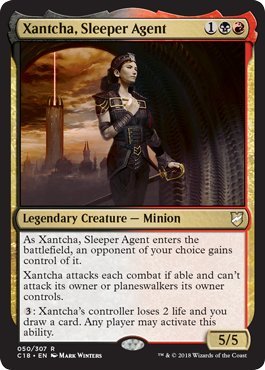 If you’re a beginner, cards like Xantcha, Sleeper Agent seem confusing and complicated. After all, when you cast her, an opponent immediately gets to take control of her. That’s a bad thing, isn’t it?

Not so, in this case. The opponent you choose to control her can attack with her, sure, but they’re not allowed to attack you. They’re forced to swing at your other enemies with her while you sit back and watch them duke it out.

As a neat little bonus, her last ability allows anyone to pay three and immediately do two damage to the person controlling Xantcha. You, on the other hand, get to draw a card when this happens. She’s a marvelously political card that can be a blast to use. 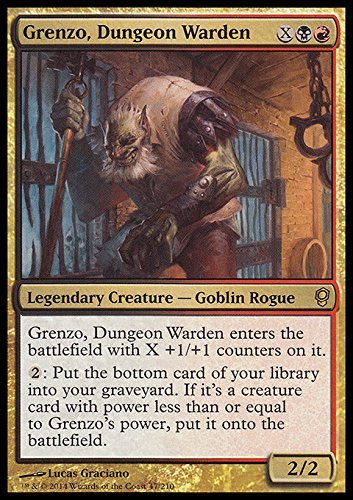 Rakdos is a combination that naturally has plenty of low-cost creatures to stack your deck with. If that’s the strategy you’re going to go for, Grenzo, Dungeon Warden is an amazing Commander.

First of all, you can pump him up as much as you like. He costs just one red and one black, but beyond that, you can put X number of mana in any color into him to give him +1/+1 counters.

His second ability allows you to pay two to put a card from the bottom of your library into your graveyard. If that card is a creature with power and toughness equal to or less than Grenzo’s power (which can be pumped up by paying extra when you cast him!), you get to put that card onto the battlefield instead.

If you put a lot into Grenzo’s initial cost, that means he’ll have a higher power and toughness. Using his second ability, you may get to cast high-costed creatures for just a mere two mana. 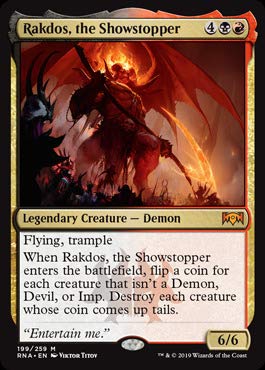 Don’t be surprised that we’ve added another actual Rakdos card on this list! Rakdos, the Showstopper truly lives up to his name.

This is an amazing Commander for Demon, Devil, or Imp tribal. When he enters the battlefield, you get to flip a coin for every creature that doesn’t fall into the aforementioned categories. If that coin lands on tails, said creature is destroyed.

Even without that built-in potential board wipe, Rakdos is still pretty strong. As a 6/6 creature with flying and trample, he’s ready to beat down your opponents. 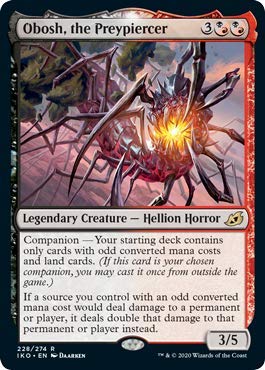 Obosh, the Preypiercer is a very stereotypical red-black card. It’s got a dark, evil theme and, of course, it’s all about hitting hard.

Obosh doubles the damage your cards do to players and their permanents, as long as the card in question costs an odd number of mana. All you need to do, then, is pack your deck with cards that have an odd converted mana cost. 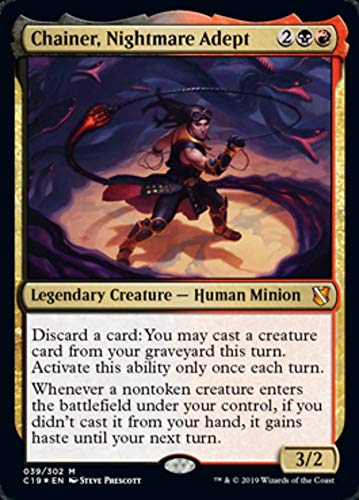 This is another card that represents the speed and aggression of Rakdos colors well. Chainer, Nightmare Adept is a solid Commander if you want to build a creature-heavy deck. It essentially turns your graveyard into another library.

His first ability requires you to discard a card. Once you do, you can cast a creature from your graveyard. Discarding isn’t a bad cost to pay here, then, since he allows you to access your graveyard for creatures, anyway.

Once you cast a creature from your graveyard, that creature gets haste until the end of the turn. This means that you don’t have to wait before you can start attacking with it again.

Olivia Voldaren is an interesting one. In a nutshell, you could describe her as a thief. If you see a creature your opponent has, and you want it, simply pay to activate her first ability, turning that creature into a vampire. She’ll also gain a modest buff of a +1/+1 counter in doing so.

Then, if you have the mana, activate her second ability to take control of that vampire. Rinse and repeat to slowly take every creature on the board that you want for your own.

She’s also thematically appealing. She clearly represents the act of vampiric transformation, since she transforms other creatures and gets a small boost afterward. This makes her a great Commander for anyone concerned with the flavor of their decks. 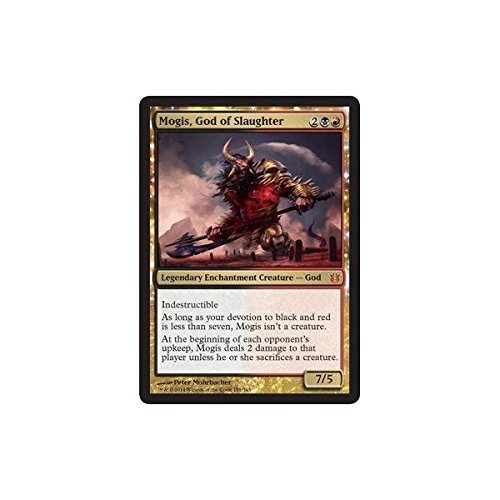 Here’s a simple, straightforward card to use as your Commander. Mogis, God of Slaughter simply does damage to each opponent if they don’t sacrifice one of their creatures.

The most complicated thing about him is that he isn’t a creature until your devotion to black and red reaches seven. “Devotion” just means the number of black or red mana symbols in all your nonland permanents.

Even when he becomes a creature, though, he’s still indestructible. This protects him from many board wipes and leads to him consistently doing damage to people as they refuse to sacrifice their creatures. Later on in the game, as life totals drop, the choice to sacrifice or take the damage becomes much more pressing for your enemies. 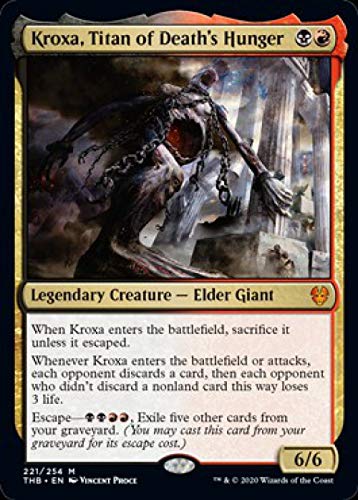 This is another slightly risky card at first because if you just cast Kroxa, Titan of Death’s Hunger from the command zone, it’s simply sacrificed and goes to your graveyard. Keep in mind that when you do this, though, his second ability still triggers, which forces opponents to discard a card. If they discard a land, they lose three life – damage that quickly adds up.

After the initial cast, Kroxa ends up in your graveyard, but using the Escape mechanic, you can bring him back out again. You’ll just need to pay two black and two red mana, then exile five other cards from your graveyard. Kroxa then re-enters the battlefield, forcing your opponents to discard and potentially lose life again.

What’s more, this ability is triggered every time he attacks – not just when he does combat damage. Your opponents can block him all they like, but the moment he attacks, they’ll still be forced to discard cards and possibly lose life. He bleeds your enemies dry. 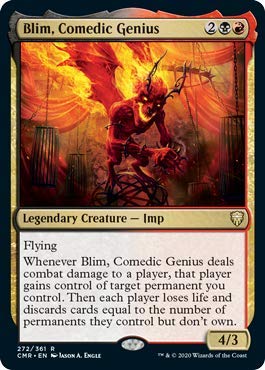 To be honest, Blim, Comedic Genius is a goofy card. Using him means utilizing a strange strategy in which your objective is to fill your deck with weak or undesirable cards.

Why? Because Blim allows you to give these cards to other players when he does combat damage to them. There are some cards that potentially force players to lose the game, so you can get creative with this one. Cards like Evil Eye of Urborg can be passed to opponents to make it difficult for them to attack, and cards like Demonic Pact eventually force opponents to lose.

We wouldn’t necessarily recommend Blim for beginners. In the hands of an experienced Magic player, though, he can be devastating and fun.

Should you build a mono red or mono black deck?

Combined, red and black make a fun color combination to play with. This pairing is excellent for beginners and more advanced players alike due to its wide range of hard-hitting playstyles. Does this mean that, individually, red and black make strong decks?

The answer is, “it depends.” We always say that the strength of a deck doesn’t depend wholly on the colors you choose – it depends primarily on your skill as a player. Not only do you need to understand which cards to put in your deck, but you need to know when the best time to use them is.

As individual colors, black is arguably stronger than red. This is because it excels at doing what most other colors can, albeit at a cost.

Red is a solid color when it comes to creatures and dealing out fast damage. It’s like a fire – it burns hot and fast.

You May Also Like: Best MTG Black White Commanders

What other color combinations are there in MTG?

Rakdos is a fun guild to dabble in. It has tons of aggressive heavy hitters that work well with Magic beginners who haven’t experienced more complex strategies yet. On the other hand, it also has a few intriguing political cards that MTG veterans are sure to enjoy.

It can also work when you’re building budget Commander decks, thanks to all the options it offers. In short, we would definitely recommend black and red decks if you’re searching for a strong starting point.