Warriors are one of the best creature types in Magic, read on below and find out which 10 cards we dub as the best MTG warrior cards! 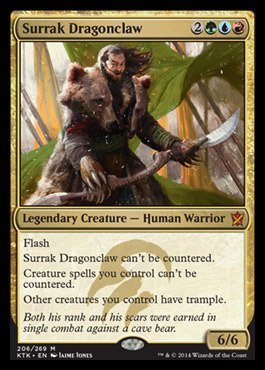 Surrak Dragonclaw is a Legendary Creature Human Warrior. He is a 6/6 mythic rare multi-colored Warrior with Flash and can’t be countered.

For 2 colorless, 1 green, 1 blue, and 1 red mana you may bring Surrak into play. Once he’s on the field, creature spells you play can’t be countered.

Even more, your other creatures also gain the Trample ability.

As you can see, Surrak Dragonclaw absolutely deserves a top spot on our list of the best MTG Warrior cards.

2. Alesha, Who Smiles at Death 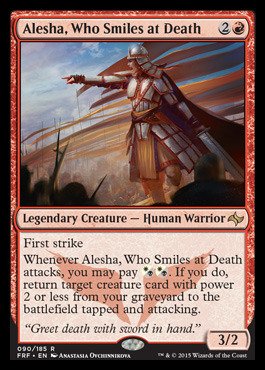 Alesha, Who Smiles at Death is not only a rare red Human Warrior with Legendary Creature status, but he also has one heck of a cool name.

This Human Warrior has First Strike and comes into the battle as a respectable 3/2 creature.

The card costs 2 colorless and 1 red mana to cast. For 2 white or red mana, when Alesha is attacking, you may return a creature card with power 2 or less to the battlefield, tapped and attacking, from your graveyard. 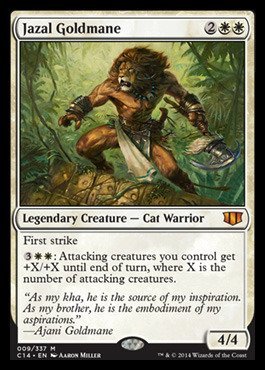 Jazal Goldmane is a mythic rare Legendary Creature Cat Warrior of the white school. He costs a medium mana cost of 2 colorless and 2 white.

This Legendary Cat Warrior comes into play was a 4/4 with First Strike.

The best part? Your attacking creature may gain +X/+X until the end of the turn (where X is the number of creatures that’re attacking) if you pay 3 colorless and 2 white mana. 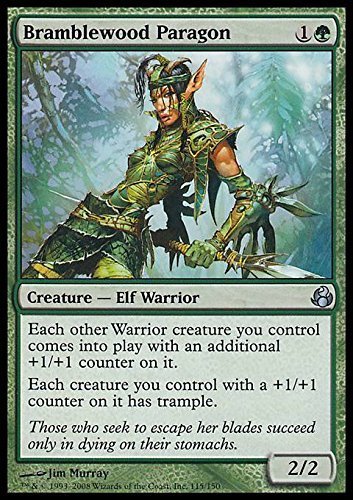 Bramblewood Paragon is an iconic Elf Warrior of uncommon status. This card has been getting play in MTG decks for years and will no doubt continue to do so for years to come.

This Elf Warrior is a 2/2, stock. When it comes into play, every single Warrior you have on the board gains a permanent +1/+1 counter.

In addition, the real reason people love this card, each creature of yours that has +1/+1 counters also gains Trample.

The counters do not disappear after your turn, and neither does the Trample ability. 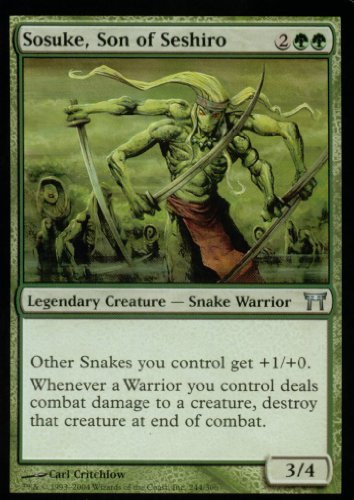 When Sosuke enters the battlefield, other Snakes you have in play gain a +1/+0 counter that’s permanent.

What really makes this card a badass though is that whenever your Warriors deal damage to creatures, the creatures are automatically destroyed at the end of the combat.

More or less? This card gives a pseudo Deathtouch ability to your other Warriors. 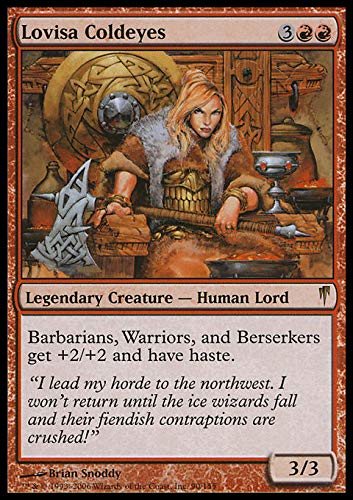 Lovisa Coldeyes is a 3/3 Legendary Creature Human Lord with a casting cost of 3 colorless and 2 red mana.

What makes this card proper for our list of best MTG Warrior cards, when it isn’t a Warrior itself? Simple; it gives Warriors, Barbarians, and Berserkers a +2/+2 and haste. 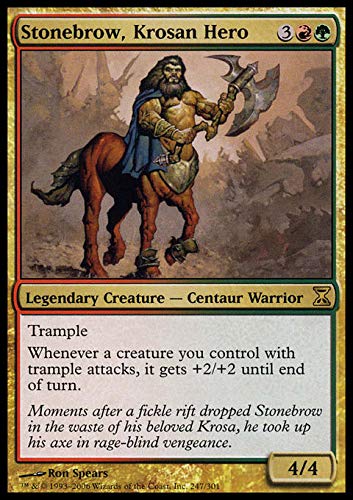 An unlikely card amongst the multitudes of great creatures that could appear on our list of the best MTG Warrior cards, is the Legendary Creature Centaur Warrior Stonebrow, Krosan Hero.

Stonebrow comes into play as a 4/4 with Trample. And, whenever you attack, creatures you control with Trample gain +2/+2 until the end of turn.

As you can clearly see, Stonebrow, Krosan Hero is a great Warrior to add to your deck! 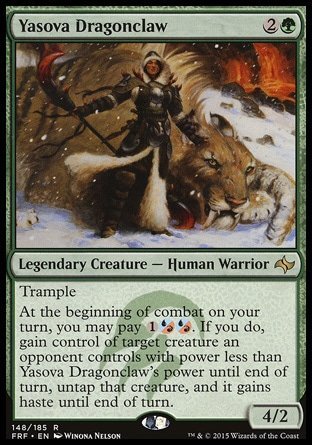 This rare 4/2 Legendary Creature Human Warrior of the green school, Yasova Dragonclaw has Trample and costs 2 colorless mana and a forest to cast.

This Warrior’s ability is truly awesome. At the beginning of combat, you may pay 1 colorless, and 2 blue or red mana. If you do? You gain control of an enemy creature of your choice.

The creature you choose to control must have less power than Yasova, but it gains haste as well.

At the end of your turn, the creature returns to its owner’s control. 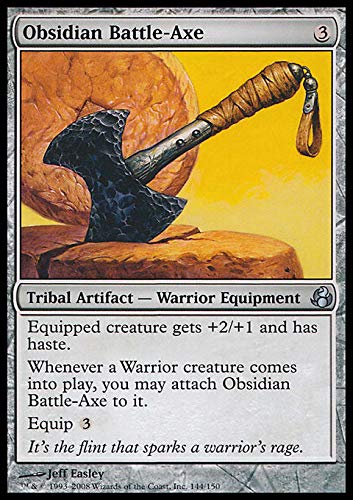 No list of the best MTG Warrior cards would be complete without a mention of the good ol’ Obsidian Battle-Axe.

Technically, the card isn’t a Warrior creature, but it is equipment specifically made for Warriors.

A Tribal Artifact Warrior Equipment, the Obsidian Battle-Axe gives a Warrior a +2/+1 and haste. The card has a 3 colorless mana cost to equip.

That said, when a Warrior comes into play under your control, you may attach the Axe to that Warrior for FREE.

The Cat Warrior Lord has Forestwalk, so he can’t be blocked except by opponents who control forest lands.

Plus, whenever he attacks, or blocks, you get to put a 2/2 green Cat Warrior creature token into play. These 2/2 Cat Warriors automatically gain Forestwalk.

What is Special About Warrior Cards in MTG?

Warrior cards are one of the ultimate creature types in MTG as far as attacking is concerned. They are typically strong and come with abilities like First Strike, Trample, and Haste. Playing with a deck full of Warriors means your opponents are going to take some serious hits.

How Do You Build a Warrior Deck?

There are several ways to build an effective Warrior deck in MTG. A general Warrior deck consists of around 20 to 30 warriors and 10 to 20 instants, sorceries, equipment, and enchantments. The rest of the cards, of course, should be land cards and mana-producing cards.

What is the Best Warrior Card in MTG?

There is no one Warrior card that is so much better than the others that it is genuinely the “best” one. However, a few of the very top Warrior cards in MTG include; Jazal Goldmane, Surrak Dragonclaw, and Bramblewood Paragon.