The best red cards in MTG are hard-hitting Instants and Sorceries as well as fast-attacking creatures with Haste and Planeswalkers with unbelievably destructive abilities.

Read on below and discover 16 of the very best Magic the Gathering cards for red decks! 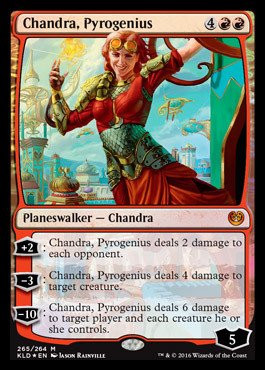 Chandra, Pyrogenius is a classic red Planeswalker of Mythic Rare status. When she comes into play, you place five loyalty counters on the card. She is an immediate threat as soon as she hits the board.

The Pyrogenius version of Chandra has the following abilities: 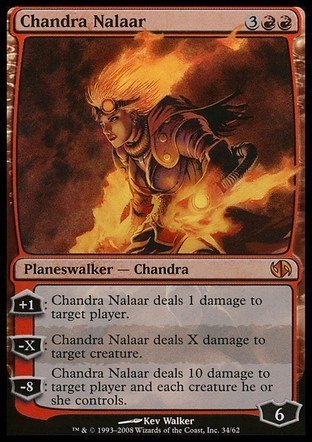 The Chandra Nalaar Planeswalker is a great addition to aggro decks, red or multi-colored commander decks, and any other decks that involve red mana. It is one of the best Planeswalkers for a mono red deck too.

The abilities of Chandra Nalaar include: 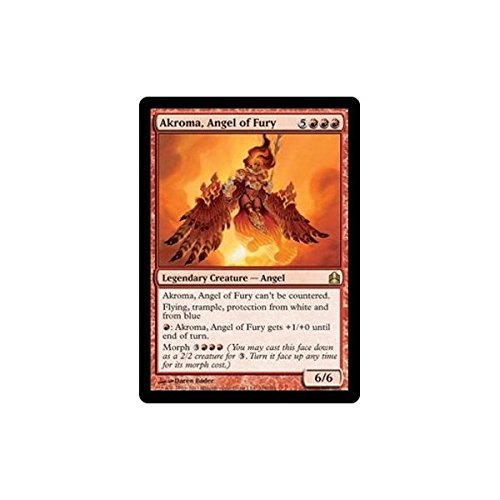 One of the most impressive 8 mana legendary creatures of any color is Akroma, Angel of Fury. This 6/6 Flyer comes into play with protection from white and blue as well as Trample and Morph(CMC 6) abilities.

Pay one red mana any time and Akroma gains +1/+0 for the remainder of the turn. Further, the card may not be countered by spells or abilities when you’re casting it either, making it even more diverse and powerful.

If it’s power on the battlefield you’re after, look no further. Even against setups like Hanweir Battlements, this creature dominates the battlefield. 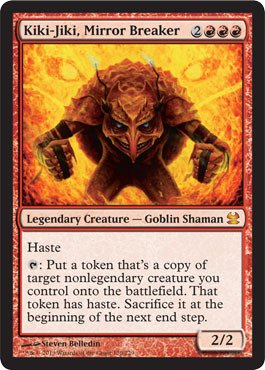 Kiki-Jiki is a well-loved legendary creature Goblin Shaman of Mythic Rare status, he costs only five mana to cast (which for a standard format is amazing for such a powerful card). For commander format, Kiki is a real bargain albeit far from a God, like Chandra.

This Goblin comes onto the board with Haste and the ability to tap for a creature token. The real kicker is that the copy is of any nonlegendary creature you control, and it has haste.

By far it is one of the coolest Goblin cards ever released from Wizards. Alternatively, Imperial Recruiter makes a great addition to red Goblin aggro decks. 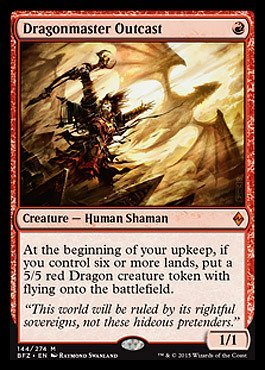 This Human Shaman is a Mythic Rare but surprisingly doesn’t qualify as a legendary creature, therefore can’t be a designated leader if it’s Commander you’re playing. But, that doesn’t mean it shouldn’t be in your red decks!

This “little” 1/1 creature is truly powerful: at the beginning of your turns, if you have more than six lands on the board, you may create 5/5 red Dragon creature tokens (just one per turn).

Midrange decks work well with this card. Just throw up an outpost siege, a defensive creature or two, and the game is yours as you spawn creature tokens left and right. 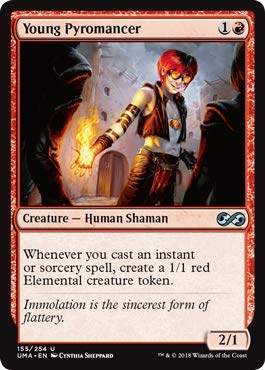 When you have this creature on the board, whenever you cast an Instant or Sorcery, you may put a 1/1 red Elemental creature token on the field.

Don’t make the mistake of overlooking this card. It may not be a Chandra or even an Elemental for that matter, but it is far more beneficial than it appears.

Come on, how many cards spawn free 1/1 creature tokens every other time you cast a spell? For no additional cost? 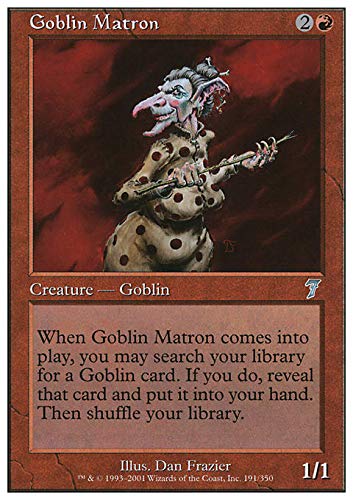 The Goblin Matron is another example of why these 1/1 red cards are infamous in MTG decks. When this creature hits the field, you get to search your deck for a Goblin card.

If you do so, show the other players the card and then put it into your hand. Shuffle your decks when you’re finished.

There are many lesser but similar cards, but most of them target a top card, not a card of your choice or specific type. 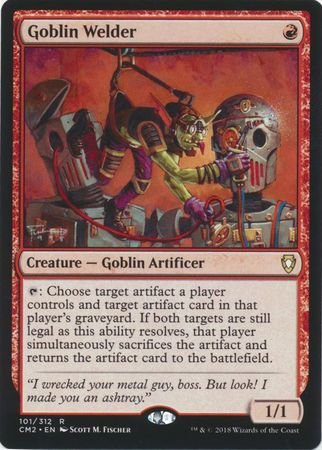 Yet another 1/1 red pinger card worth stacking into as many of your red mana decks as possible is the Goblin Welder. Even more, this one only costs one mana.. *poof* mind blown.

A Goblin Artificer of Rare status, this little guy has the ability to tap and choose a target player’s artifact and artifact card from their graveyard, and switch them.

Just when the opponent thought they had you where they wanted you? 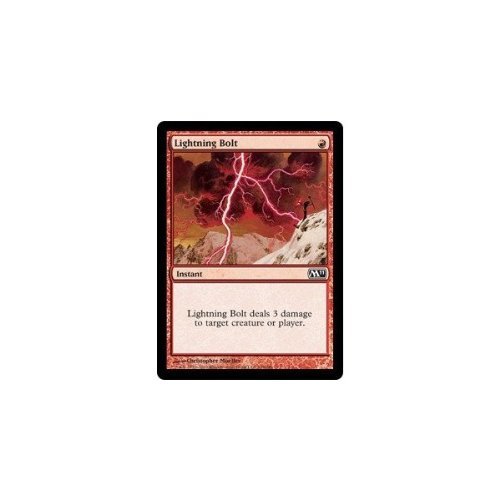 The Lightning Bolt is one of the most famous quick damage spells Magic the Gathering (particularly ones that deal three damage directly upon playing), of any mana color. The best part is that they are Instants, and can be played almost any time.

That said, this card is a perfect example of why red mana rocks, for real. These red mana Instants deal direct damage worth 2, 3, even 4 times as much as the 1 mana they cost. 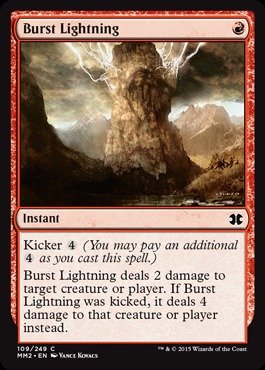 Burst Lightning Strike is another one mana red Instant that deals up to four damage. When you cast this card, the opponents are in a world of hurt.

If you pay the kicker (4 CMC) the card deals 4 damage to target player or creature rather than the 2 damage it does without the kicker.

Against an opponent player, as well as legendary creatures and like the Ur Dragon, this card comes in mighty hand in reserve.

Bottom line? With a few of these? It’s good game. 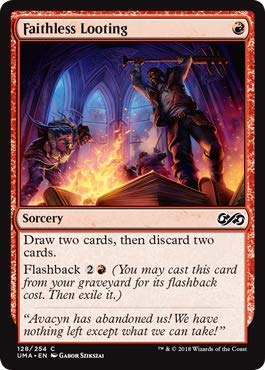 For one mana of the color red, the Faithless Looting sorcery card advantage is ridiculous, when it comes to drawing, discarding, and milling cards.

Even more, the spell comes with Flashback (3 CMC). That means you can bring it back from the graveyard at your convenience (whenever it hurts your opponents the most).

Its advantage isn’t a physical attack, but the spell makes for an amazing play either way. A good alternative among red spells is Blasphemous Act. 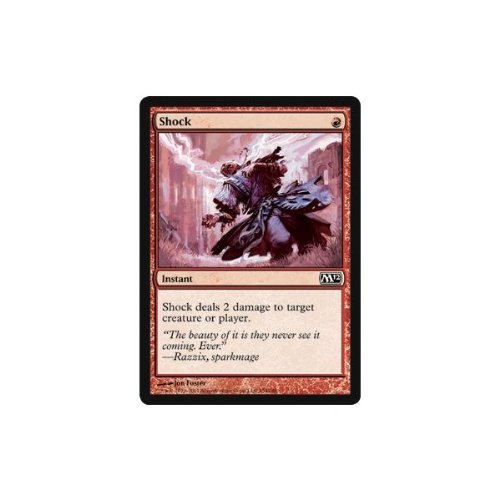 Shock is not the top damage spell in the game, but for a single red mana, it deals 2 direct damage to the player or creature of your choice.

That means your opponents can say goodbye to those pesky 1/1 Dragon flyers that tap and deal damage to you, as well as the likes of their 2/2 Elves that tap for extra mana.

Shock is one of the most popular damage spells to attack within Wizards decks, period. Need we really say more? …lol. 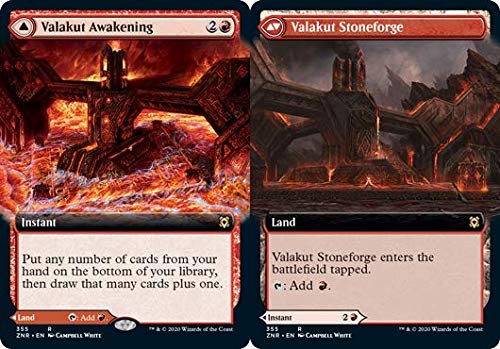 Valakut’s Awakening version is actually one part of a double card. It is paired with Valakut Stoneforge. Both cards are Instants, though you must choose one or the other to cast.

When you cast these spells, you may put any number of cards onto the bottom of your deck from out of your hand. You may then draw that many top cards, one by one, plus one extra card.

Again, an alternative with less risk factor is Blasphemous Act. Even Dwarven Hammer might replace it in some decks. 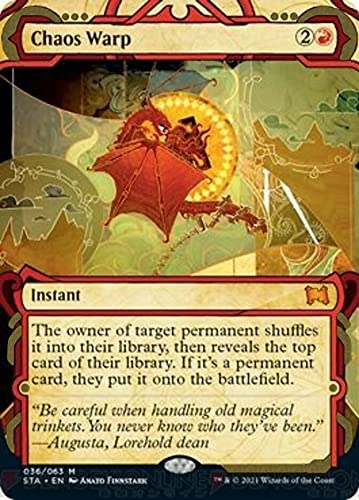 Chaos Warp is the only Mythic Rare Instant on our list, and belongs to a very small cool-kids club made up of Instants with said shiny red badge (Mythic Rare Instants are indeed very rare). For Wizards decks, it is a must-add card.

When you cast it, the targeted victim of your spell shuffles a permanent into their deck and then shows everyone the top red cards of their deck. If the said card is a permanent, they get to put the card onto the board.

Sure, it isn’t a total board wipe like Mizzium Mortars causes, but hey, it’s not a God card. It’s “just” a Mythic Rare Instant spell. 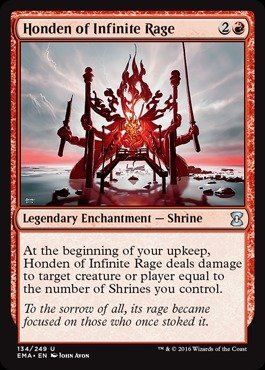 The Honden of Infinite Rage is a super unique card of Uncommon status, belonging to a full set of Shrines (one of each main color).

These Shrines are far more helpful than most Enchantments and Artifacts, in fact, they are the closest thing to great utility artifacts that many red aggro decks contain.

The Shrine is a legendary Enchantment. At the start of your turn, it enables you to send damage to target creatures or players.

The amount of damage that the shrine deals out depends on the number of Shrines you have on the battlefield. For this reason, the Shrine actually does much more damage in rainbow decks than in any other type.

To maximize damage, play this card in three color decks if not four or five. 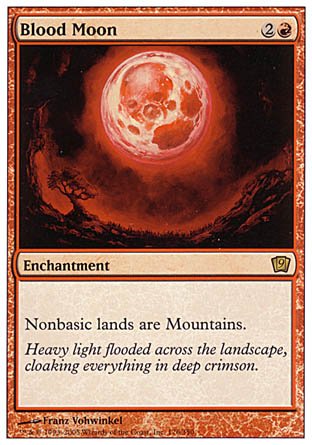 The Blood Moon Enchantment is a Rare red card with a major card advantage you won’t believe (far more than its amazing three mana cost.

Ready for it? Brace yourself…

When Blood Moon comes into play, all nonbasic lands on the board become red mana (mountains lands).

So, all those fancy lands that give all sorts of advantages and benefits to your opponent? Useless as long as you keep this Enchantment on the table.

… if only it also targeted artifacts!

A Final Word About the Best Red MTG Cards

Red cards make amazingly quick and powerful commander decks and Wizards MTG decks in general. Red is not the color your opponent wants to see.

Why is that? Because red mana rocks, especially for casting a cheap creature with haste every round (like Glitter Fang or various red Wizards). It’s also great for casting cheap but super-potent damage spells (like Lightning spells), not to mention incredible red commanders like Chandra (in any of her versions).

Hopefully, our list helps you pick the best red cards for your next red deck! Thanks for reading.