The best tribal cards in MTG include creatures, enchantments, and spells of all five mana types. The major card advantage of tribal cards is that boost or otherwise bolster other cards of the same “tribe.” 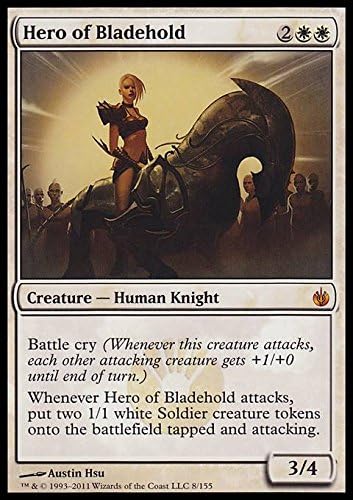 The Hero of Bladehold is one of the very best white Soldier tribal cards, a 3/4 Human Knight with Battle Cry. Whenever you attack with it, other attackers you own receive a +1/+0 until the end of the turn.

Also, when this hero attacks you get to place two 1/1 white Soldiers onto the table tapped and attacking alongside her.

The only downside is that her ability is no go for other tribes. 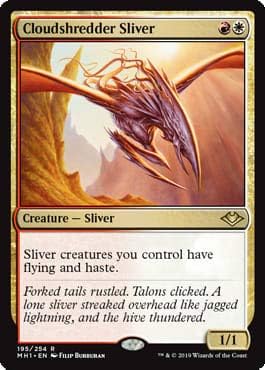 This Rare white and red creature belongs to the Sliver tribe. As long as it is in play, other Sliver creatures you control have Haste and Flying.

The creature costs one red mana and one white mana to cast. When it comes to the game, it’s pretty much over if you have at least a few tribe members on the board.

If not, you’ll need to draw one or two more creatures before casting it. That said, for a weenie, stacked into a tribal Sliver deck, this “little” guy packs a real big punch.

That said, as far as tribes go, Slivers are among the rarer to see a full set of in combat. 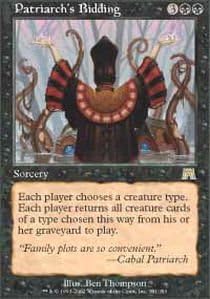 When it comes to black tribal cards, the Patriarch’s Bidding Sorcery is one of a kindred discovery spell. What does that actually mean? It’s simple: basically, when the card comes into play, you get to choose a kindred creature type.

Pay three mana, colorless, and two mana, black, to cast this spell. When you do, make sure to choose the creature type of whatever tribe you are playing with.

All creature cards of your tribe type return to the field from the graveyard with instant speed. This card is crucial for all tribes, which is why you find it in decks with the best tribes.

It is one of the most popular tribal cards to use with Midnight Hunt and Crimson Vow creature types. 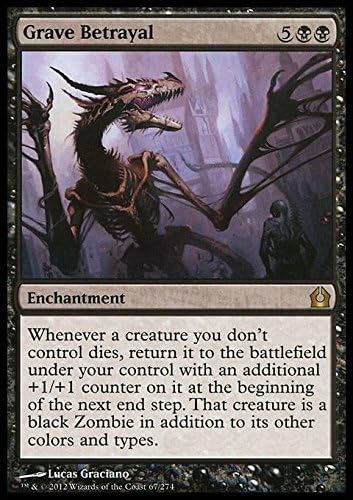 Grave Betrayal is another amazing black tribal card of Rare status, it’s perfect for Zombie tribal decks. Whenever another player’s creatures die, you get to return those creatures to the battlefield under your control.

Yes, you really read that: whenever someone else’s creature dies, you take control of it from their graveyard and return it to play under your control.

But, wait, there’s more! For the price of one ShamWow… I mean, uh… there’s more! Your freshly highjacked creature also gets a +1/+1. It also becomes a black Zombie.

There is only one way to describe the atmosphere at the table once you play this card: shared animosity amongst your opponents. 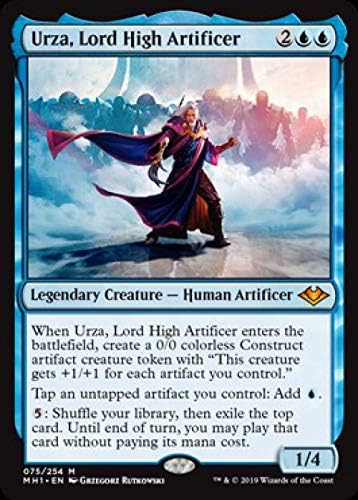 The Lord High Artificer, Urza is a Rare blue Human Artificer, a legendary creature type that fits well in most Island-type tribal decks, be it Wizards, Humans, Spirits, Serpent, or Merfolk.

Out of all the cards on our list, this is the only one that works as an actual Commander in Commander format.

When this card enters the battlefield, create colorless Construct Artifact creature tokens (1/1) with the ability to gain a +1/+1 for every Artifact you have on the table.

You may also tap an Artifact that you have on the field and add 1 blue mana to your pool, thanks to the passive powers of this card.

Further, pay 5 colorless mana and shuffle your deck and then exile the top card. You may play the exiled card basically for free until the end of the turn. 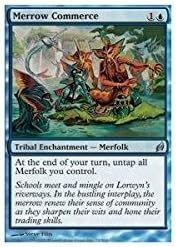 The next best tribal card on our list is the Merrow Commerce. This one is actually classified as a Tribal Enchantment Merfolk.

When you pay 2 CMC and cast this bad boy, you may untap all the Merfolk creatures you control at the end of your turn.

That means, once you deliver a crushing blow, you can untap and attack opponents again to deliver the actual death blow.

Few cards in tribal decks have such a crucial impact on the end game as this one. 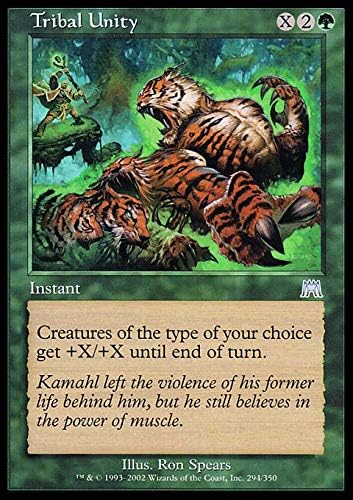 The tribal unity Instant is an Uncommon card with an X + three mana cost to cast, and it works well for all tribes.

When you play this card, the creature type of your tribal deck gains +x/+x until the end of the turn. Timed right, this card is a game-ender.

For a forest-type tribal deck, no slicker card advantage exists (in our humble opinion!). Again, it’s more than worth noting that this card works for multiple tribe types including elves, dragons, vampires, and creatures of any other tribe type. 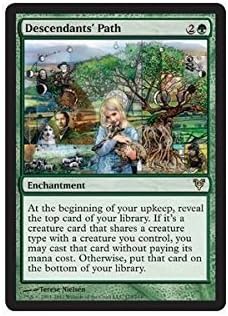 Another excellent card advantage for a green tribal deck is Descendant’s Path, the Rare Enchantment. It arms you in a way that keeps your chosen type of creatures flowing onto the board for free.

At the start of your turn, show the top card of your deck to the other players and if it is the same type as your tribal cards you get to play it for free.

That is some serious card advantage right there folks. No matter what tribal deck you’re using, if it’s green, these two cards work wonders. 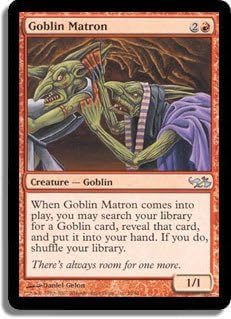 The Goblin Matron is a 1/1 with a casting cost of 3 CMC, and a heck of ability for the world of MTG.

When the card comes onto the board, you get to search through your deck for a card with the Goblin creature type.

Reveal the card to the other players and then put it in your hand and shuffle your deck. It may not deal damage, but it keeps you drawing your chosen type of cards all game long and getting them onto the board.

For decks packed with Goblin creatures, this card draw action is flat our priceless. Thanks, Wizards of the Coast!

Sadly, Goblin Matron is not a Commander, as she lacks the legendary creature-type status. 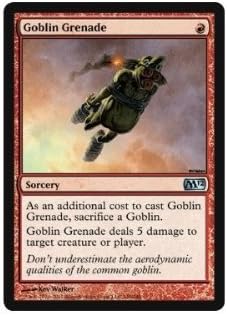 There are few red tribal cards better than Goblin Matron, but this next card offers an equal amount of quality for Goblin tribal decks… just, in another way.

The more Goblins you have, the more sacrificial lambs you have at your disposal to launch at the enemy as Goblin Grenades.

Goblin Grenade deals 5 damage directly to a player or creature of your choice. For opponents, there is no protecting themselves from assuming the damage.

Keeping a few of these Uncomoon red Sorcery cards in your Goblin deck is never a bad strategy. These cards allow you to drop the opponent’s life by a full quarter with each attack. 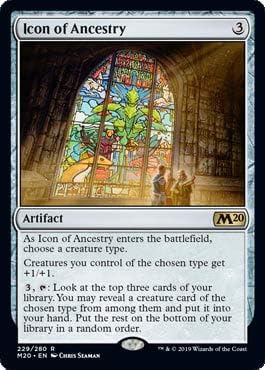 The Icon of Ancestry is a perfect example of a Tribal card that transcends creature types. It has a focus on card draw, power and toughness boosting, and Scrying.

When the card enters the field, choose from among all creature types. Those creatures gain a +1/+1 buff. In our opinion? It’s one of the best Artifacts ever thought up by Wizards of the Coast.

Further, you may pay 3 CMC and tap the card to Scry 3, and then choose one of those three cards to put in your hand. The other two cards go randomly into the bottom of your graveyard. 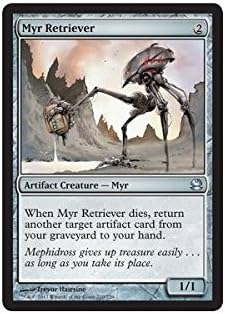 The Myr Retriever belongs to an Artifacts tribe that is often overlooked; the Myr. These creatures are among the most unique MTG creatures, regardless of what decks they’re in.

When this Myr dies, you may return any matching tribal type from your graveyard to your hand(other than the Myr that just died).

For 2 CMC, these little 1/1 peons are a far greater asset to tribal Myr decks than Rare cards that cost two or three times as much to cast.

If you’re a collector that likes to own things others don’t expect, go for a Myr deck with kindred discovery spells.