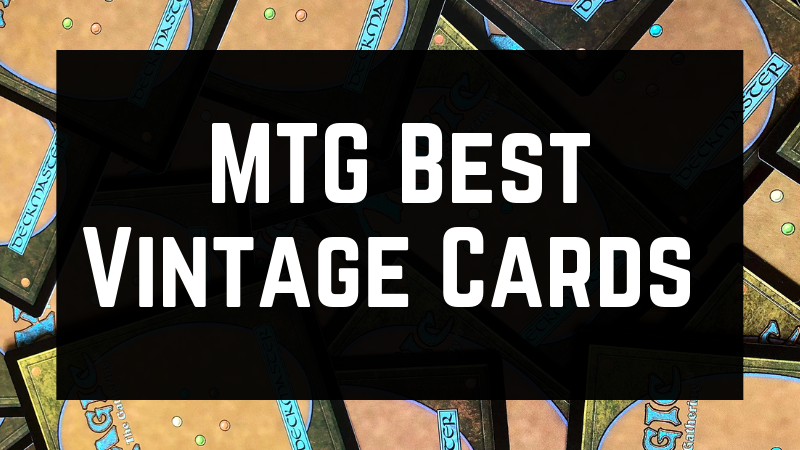 MTG is one of the most beloved collectible card games in the world, and with over 20,000 different cards, and hundreds of new cards appearing each year, the oldest cards become rarer and more valuable. Read on below and find out our top picks for the best vintage MTG cards!

By far the rarest vintage card in MTG is Black Lotus. Belonging to the Alpha, Beta, Unlimited, and Vintage Masters series, Black Lotus is a colorless artifact that allows you to bring it into play for free. Further, it allows you to tap it and sacrifice it in order to add three mana of any color to your mana pool.

This card has recently sold in auction for over half a million dollars, though the going price for it is around $10,000. That said, you may find a copy of it for as little as $2,500. There are said to be only several hundred Black Lotus cards left.

At a cost of a single island land, the Preordain sorcery allows you to scry and then draw two cards. In other words, for the cost of a single blue mana, you can look at your deck, and draw the top two cards after you look at it.

Learn more about Preordain on the official MTG Card Database.

A second blue Magic card that wreaks havoc, and costs just a single blue mana, is Ancestral Recall. This rare blue Instant allows (or forces) a target player of your choices to draw three cards.

Ancestral Recall helps you get much-needed cards into your hand, and into play QUICKLY. Or, it can force your opponent to burn through their library faster, forcing them to sacrifice cards and disturb their strategy!

Mind Twist is one of the most beloved special rare vintage cards, right along with cards like Black Lotus and Mox Ruby. Costing just a single swampland, and X colorless mana, Mind Twist forces a target player to discard X amount of cards from their hand at random.

As you probably already figured out, this card is PERFECT for playing on an opponent directly after playing Ancestral Recall (the previous card on our list). That way, they have extra cards in their deck, and you can literally force them to discard their entire hand.

Mox ruby is yet another special rare of Vintage class that actually costs ZERO mana to bring onto the battlefield. Tapping Mox Ruby grants you a mountain land/red mana to your pool for the remainder of your turn.

Mox Ruby can be used every turn, just like a normal mountain land. The cool thing is that it can’t be targeted as a “land” card by opponents even though it gives you the same ability as a mountain land.

Timetwister is a lovely blue sorcery-type card of the Vintage Masters edition. The card costs 2 colorless mana and one island land to cast and goes straight into the graveyard afterward.

Casting the Timetwister sorcery card causes everyone in the games to shuffle their current hand into their graveyards, and then to draw an entire hand of seven cards from their deck.

Learn more about Timetwister on the official MTG Card Database.

Time Walk is one of the most helpful blue spells out of all the Vintage cards that cost so little to play. For 1 colorless mana and one island land, Time Walk grants you an extra turn after you complete the current one.

Time Walk is an excellent card to hold in your hand for a few rounds and make a few preparations on the battlefield before casting. The results are playing this card are often unexpected and catastrophic for the target opponents.

Volcanic Island is a fan favorite of many old-school MTG players and is just as popular with new players. The Island Mountain gives you the ability to use it as either red or blue mana whenever you tap it.

Few rare cards are so straightforward and useful as the Volcanic Island. More often than not, an additional price or stipulation is attached to special lands like this one.

If you haven’t already guessed it, blue cards are well-known and loved for their Magic abilities and effects. Each color has its strengths and weaknesses, blue’s strength is affordable arcane magick, like this Copy Artifact card that only requires 1 colorless mana and 1 island land.

When Copy Artifact comes into play, you may copy any artifact on the battlefield, including your own as well as your opponents. The Copy Artifact card becomes an exact clone and is treated like one. It stays in play even if the original is destroyed.

Underground Sea is another extremely beneficial card to have in a mixed Vintage deck, like Volcanic Island. This rare Vintage island swamp card allows you to tap it each turn for either a blue or black mana.

These double-land cards are priceless on the battlefield. Just playing a card like Underground Sea tends to strike fear (or jealousy) in the opponents, which in its own right is a psychological advantage of sorts for you!

What is the Rarest Vintage MTG Card?

Black Lotus is considered as the rarest vintage MTG card, with only a few hundred copies left in circulation. The price of the card is typically well over $2,000. Vintage Force of Will, Time Walk, and Ancestral Recall cards are quickly becoming just as famous and rare as vintage Black Lotus cards.

How Much Are Vintage MTG Cards Worth?

Vintage MTG cards range from as little as $5 to nearly $10,000, for a single card. The main factors that go into the price are how rare the card is (how many were printed/are in circulation), what shape it is in, how old it is, and whether or not it is a “foil” card or a standard card.

What Qualifies an MTG Card as “Vintage”?

To be considered as a vintage MTG card, the card must belong to the first few printings of MTG cards. That means the only “real” vintage cards are Type 1/Type I cards from the 1990s. Any cards produced in later years, even if they do happen to be two decades old, aren’t technically vintage, though they may be just as valuable.