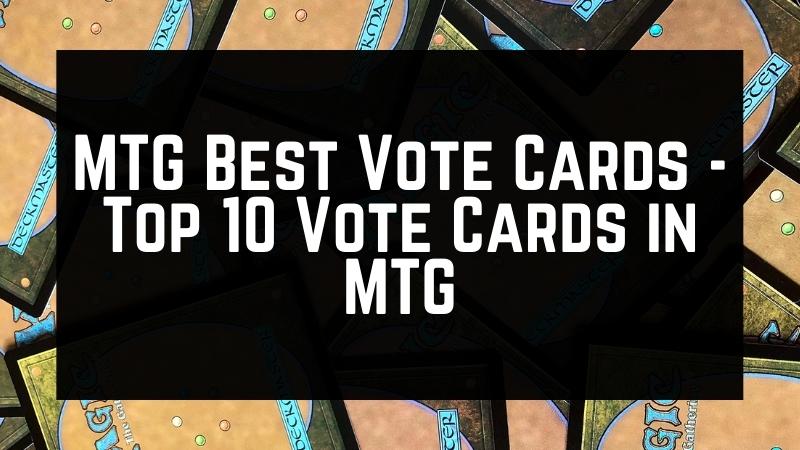 If you’re curious about Vote cards, read on. Below, we list our picks for the top 10 best vote cards in MTG as well as discuss common questions about MTG Vote cards! 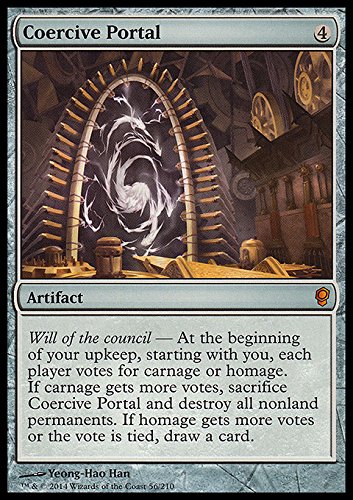 The first card on our list of the top Vote cards in MTG is a mythic rare; Coercive Portal. It is a perfect example of how diverse Vote cards are. At the beginning of your upkeep, Coercive Portal demands that the will of the council vote for Carnage or Homage.

If Homage wins, draw a card. If Carnage wins the vote, sacrifice Coercive Portal and destroy all permanents. This potent Vote card costs 4 mana to cast. 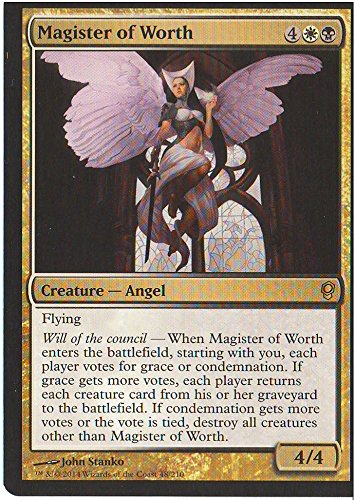 No Vote deck is complete with the rare angel card, Magister of Worth. With a cost of 4 colorless mana, a swamp land and a plains land, it’s not likely that you’ll get this winged vixen into play before round seven or eight. But, when she comes out, all bets are off (for your opponents).

Masgister or Worth demands all players to vote for either Grace or Condemnation. If Grace is voted for, all players return a creature to the battlefield from their graveyard. However, if Condemnation is chosen (or the vote is a tie), all creatures on the board are destroyed besides Magister of Worth. 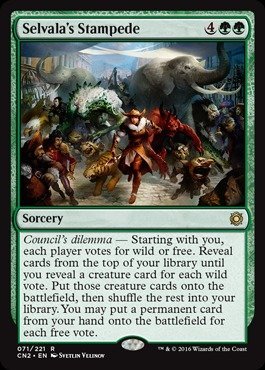 Another heavy hitter amongst Vote cards is this green card that costs 4 colorless mana and two forest lands, Selvala’s Stampede. When the card comes into play, starting with you, each player casts their vote for Free or Wild.

For every Wild vote, reveal cards from the top of your library until you get to a creature card and then put it into play (shuffling the rest of the revealed cards back into your library). Free votes, on the other hand, enable you to place a permanent onto the battlefield without paying mana costs. 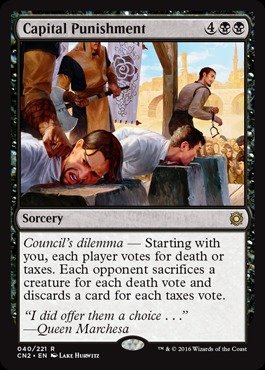 At a mana cost of 4 colorless and two swamp lands, Capital Punishment is genuinely one of the cruelest black Vote cards in MTG. When this brutual sorcery comes into play, each player is asked to vote for Sacrifice or Taxes.

For every Sacrifice vote, all players must sacrifice that many creatures. Likewise, for each Taxes vote, players must discard a card. As you can see, this card IS genuinely capital punishment. 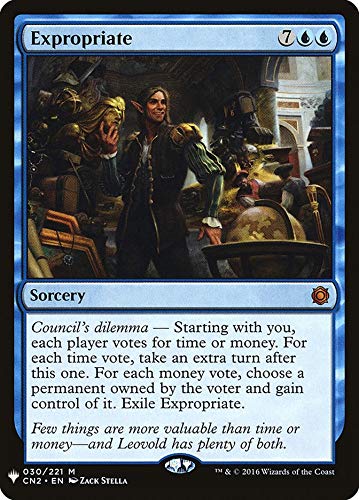 Expropriate is one of the most “expensive” Vote cards to get out onto the battlefield in MTG. With a convereted mana cost of 9, you’ll more than likely not be able to cast this bad boy for at least the first 10 or 12 rounds. But, with plenty of lands on the board, Expropriate will defientely turn the tide of the game if played later in the game.

When Expropriate is played, each player needs to vote for either Time or Money. For each Time vote, you get to take an extra turn directly after the current one. Money votes are even cooler; you can control of a target permanent that belongs to the voter. At the end of your turn(s) Expropriate is exiled. 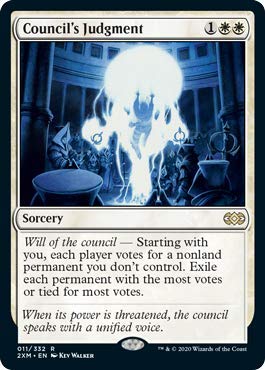 The Council’s Judgement is a fun “little” Vote card. With a cost of 1 colorless and two plains lands, the card forces all players to vote on non-land permanents not owned by you. Whichever card(s) ends up with the most votes, or are tied for most votes, must be exiled immediately.

With such a cheap cost, there’s no excuse to not include Council’s Judgement in your Vote deck if you have white mana in it.

7. Lieutenants of the Guard 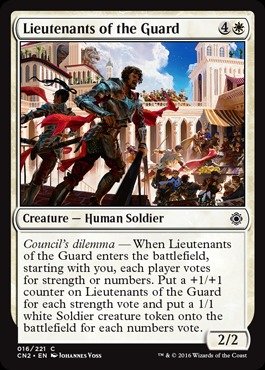 One of the very best common Vote cards is without a doubt this one; Lieutenants of the Guard. The cost is bordering on high, at 4 colorless and one plains land, but again, as with most Vote cards, it is more than worth the mana.

As far as common cards go, Vote abilities don’t get much better than this one.

The Council Guardian is a Giant Soldier card that costs 5 colorless mana and and one plains land. Its Vote ability determines which color that this giant guardian will have protection from.

Each player has to vote for a color when the card enters the battlefield, whichever color gets the most votes from players decides the color of cards its protected.

A rare blue Vote card that’s most defintiely worth adding into your Vote deck is Plea for Power. With a mana cost of 3 colorless and one water land, it has a middle of the road expensive that is well worth the effects.

When Plea for Power enters the game, all other players must for for either Knowledge or Time. Votes for Time result in you getting extra turn after this one. Knowledge votes winning the will of the council allows you to draw three extra cards.

The Ballot Broker is another common card, a human adviser to be exact, that comes with an affordable casting cost (2 colorless and one plains land) and a versatile Vote ability. The best time to play this card is directly after playing a Vote card. When it enters the battlefield you may cast an additional Vote on whatever happens to be voted on this turn.

As you can see, a couple of Ballot Brokers can be extremely useful to hang onto until just the right moment that you need to tip the scales one way or another during an important vote.

What Is Vote In MTG?

Voting is what happens when a Vote card comes into play or its Vote ability is otherwise activated or triggered. Typically, all active players are forced to vote on one effect or another presented by the Vote card in question. Depending how the players vote, various effects take place immediately. The effects of votes are different for each card but may include losing life, gaining life, drawing, discarding, sacrificing, gaining control or permanents, and more.

Why Is Council’s Judgement So Good?

Council’s judgement is an absolutely crucial card for removal tactics in MTG. Not only can is skirt around Protection abilities of your opponents, but it can also target just about any permanent in the game AND remove two cards instead of one if the circumstances are just right.

What Is a “Council” In MTG?

In MTG, the term “will of the council” is used on cards that call for players to vote on one effect or another. In other words, “council” refers to the active players in the game (who will be voting). When voting cards are played, all players must be included in the will of the council. There is no way out of voting.