Home » MTG » Can Planeswalker Abilities be Used on the First Turn?

Can Planeswalker abilities be used on the first turn of the game? Or do they suffer summoning sickness as creatures do?

Read on below and discover the full truth!

Can Planeswalker Abilities Be Used On The First Turn?

Planeswalkers are not creatures, and therefore do not suffer from summoning sickness. That means, yes, planeswalker abilities can indeed be used on the first turn you control them.

Only creatures that are affected by summoning sickness can’t use abilities, or attack, on the first turn after they are cast.

The best part about it is that these abilities are often much stronger than spells and abilities of other card types, and you can use them right away. 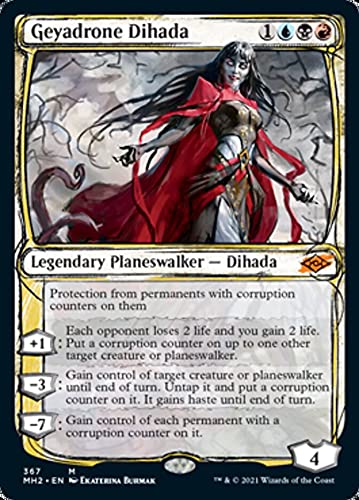 Geyadrone Dihada is one of the “newer” Planeswalkers, meaning she was released after the new rule classifying ALL Planeswalkers as Legendary. She’s a mythic rare card of blue, black, and red, and has protection from permanents with corruption counters.

Her abilities include life gain and life drain, gain control of target creature or planeswalker until the end of the tyrn, and gain control of each permanent with a corruption counter on it.

She only costs 4 mana and comes into play with 4 loyalty counters in place.

Even more, her abilities may be played during the first turn they are on the board. They take place at the same speed and times that Instants are played.

Can Planeswalker’s Abilities be Used as Instants?

Planeswalker’s abilities are not instants, nor do they count as such. They do however play like instants and work at the same speed as Instant spells do. Further, you can play them at the same times during your turn that you would an Instant.

Can You Use Planeswalker’s Abilities Every Turn?

Yes, you can use Planeswalker’s abilities every time it’s your turn. The catch is that you can’t use them more than once per turn.

How Many Times Can You Play Abilities?

Planeswalker abilities may be played just once per turn, additional plays would make the abilities far to OP.

Planeswalkers continue to prove themselves as the toughest and more versatile cards out there; they are super potent, hard to kill, and have no summoning sickness.

As soon as your Planeswalker hits the table the abilities are ready to be used as you see fit when you see fit.

Thanks for reading, hopefully we answered all of your questions!