Home » MTG » Can Planeswalkers Be Commanders in MTG? (EXPLAINED)

Can Planeswalkers be Commander in MTG, or is that a designation strictly for legendary creatures?

Commanders are the main heros and leader of your Commander deck, which are typically legendary creatures.

But, what about Planeswalkers? Are these potent cards able to occupy the Command Zone?

Can Planeswalkers be Commanders in MTG?

That said, far from all Planeswalkers can be Commanders. Because, unfortunately, most of them don’t have this special ability in their card description.

The most common Commander cards are predominately legendary creatures. 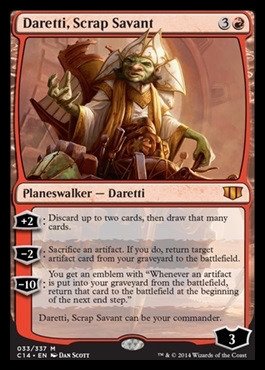 Most Planeswalkers can not be a commander, unless you are playing freestyle commander with friends.

This particular Planeswalker is an excellent commander, forcing others to mill cards, draw cards, return cards from the graveyard, and even enabling you to create an emblem that returns artifacts to the battlefield from your graveyard at the beginning of the next round after they are sent there.

All in all, the card is obviously geared towards an artifact heavy deck. So, if that’s your style, you know what Planeswalker you need for your next commander deck!

What is a Commander?

A Commander is the designated leader of your Commander deck. You can switch in between games. Most players keep more than one Commander-worthy card in the sideboard.

Why Aren’t All Planeswalkers Commander-friendly?

Only cards with the ability to be Commanders may be so. It is rare for Planeswalkers to have the ability, but not impossible. Double-check Planeswalker descriptions before you rule them out!

Planeswalkers are some of the very best Commanders in the game. Unlike other cards, such as legendary creatures, that end up as Commanders, these cards are almost guaranteed to have multiple abilities.

Planeswalkers can indeed be Commanders, but only if they have the ability to be a Commander clearly stated in their description. If your Planeswalker doesn’t have that particular ability, it can not be designated as a Commander.

Legendary creatures are much more commonly used as Commanders than any other sort of card. However, if you can pull it off, Planeswalker Commanders are the toughest for your opponents to defeat.

We hope that clears up all your questions, thanks for reading!