Can Planeswalkers be tapped like most cards? Or are they beyond creature-like status, as many permanents are in MTG?

Can Planeswalkers be Tapped for Anything in MTG?

Planeswalkers can not be tapped, because they are not creatures, artifacts, or any other card type that taps. They never tap, for any reason.

Rather, Planeswalkers have loyalty counters, in the place of the strength and toughness that creatures have. These counters are used to pay for the activation of Planeswalker abilities.

The one exception is super rare Planeswalkers that may become “like a creature” and tap to attack and block. It’s possible, but only happens on a professional level most of the time. 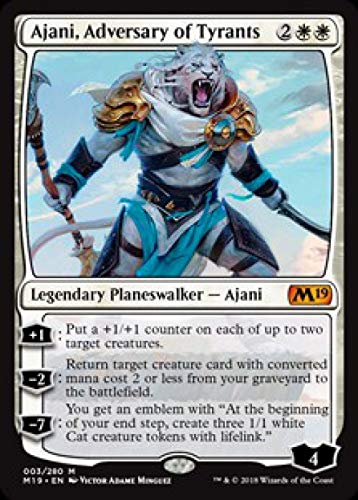 Ajani, Adversary of Tyrants is a Mythic Rare white Planeswalker that has a great impact on creatures. But, it can’t be tapped, just like 99.99999% of Planeswalker cards most of the time.

It does, however, have some really awesome abilities: place +1/+1 counters on two target creatures, return target card from the graveyard to the field, or get an emblem that creatures three 1/1 Cat creatures with Lifelink.

As far as cards with the ability of spawning Lifelink creatures go, this Planeswalker is one of the very best of its kind.

FAQs About Can Planeswalkers be Tapped?

Planeswalkers do not tap because they have no ability or mechanics that involve tapping. They are not to be confused with Legendary and Mythic Rare creatures that do indeed tap and untap like other creatures. Planeswalkers are in a league of their own.

How Do Planeswalker Abilities Work?

No, the abilities of Planeswalkers are not considered spells. They are abilities, just like abilities from any other card, and they are counted as such. They are often confused with spells, though they are more similar to Instants than sorcery spells.

Planeswalkers are very rarily ever tapped because for the most part, they don’t even have the ability to tap. Even if you wanted to tap them, most Planeswalkers simply can’t do it.

They do not attack, or block, and aren’t classified as creatures or land either. Basically, Planeswalkers have zero functions that would have them tap.

The only exception we’re aware of is a few Mythic Rare Planeswalkers that allow your card to become like a creature, even attacking and blocking.

Hopefully that clears up your questions. Thanks for reading!