Enchanting cards is one of the best ways to boost your forces or diminish enemy capacities, but can you enchant opponents creature in MTG directly? That is the important question here.

Below, we discuss the answer in-depth!

Can You Enchant Opponents’ Creatures in MTG

Magic the Gathering is full of interesting enchantments, including cards that allow you to directly enchant creatures that belong to other players. So, yes, you certainly may enchant your opponent’s creatures.

Some enchantments allow you to take full control of another player’s creatures, while others simply keep the creature from attacking, blocking, or bolstering its strength and toughness.

There are also enchantments that aren’t actually meant for enchanting opponents’ creatures, but in the right time and place are perfect for the job.

For example, an enchantment that enables you to gain life each time the enchanted creature deals damage is one that you’d typically keep for yourself.

But, when an opponent’s creature is so fierce that you know they’re going to use it for attacking relentlessly, this type of enchantment is exactly what you want to stick on an enemy creature. 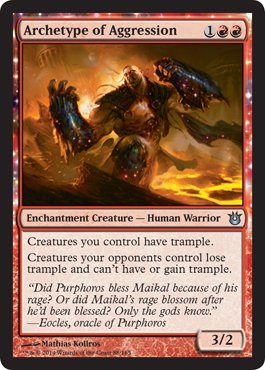 There are many cards that allow you to directly, or indirectly, enchant your opponent’s creatures. Archtype of Aggression is one such Uncommon Enchantment that does just that, but there’s a twist; it’s also a creature, and grants your other creatures the Trample ability.

As for the opponent’s creatures? Those poor buggers lose Trample and can’t gain it so long as this Human Warrior Enchantment creature is on the battlefield.

FAQs About If You Can Enchant Opponents Creature in MTG

How Do You Enchant Another Player’s Creature?

Enchanting a creature that you don’t own is simple. Wait until it’s your turn, tap the correct amount of mana, reveal the enchantment, and then place it on the desired creature. That’s all there is to it.

When Can You Use Enchantments?

What Sort of Enchantments Are Best for Enemy Creatures?

The best type of enchantments to play on a creature vary depending on the layout of the battlefield. Factors like what sort of cards each player is using, and other dynamic aspects of the game you find yourself in are crucial. That said, enchantments that include negative counters, poison, or gain control abilities rank highly. Enchantments that keep creatures from attacking, blocking, tapping, untapping, and using their abilities are also rather potent.

Enchanting other players’ creatures is perhaps one of the most exciting and instantly rewarding maneuvers you can pull off. In MTG, creatures are the lifeblood of the battlefield.

Whenever your creatures are affected by another player’s influence, outside of battle itself, your careful plans can go sideways real quick.

Thanks for reading! Hopefully, your questions are laid to rest!