Home » MTG » Can You Enchant Other Players in MTG? (EXPLAINED)

Have you ever wondered whether or not you can enchant other players in MTG?

Sure, playing with enchantments is one of the most fun and exciting strategies in the entire game. But, can you actually enchant your opponents directly?

Read on below and learn all about it!

Can You Enchant Players in MTG?

There are numerous types of enchantments available to play with, in MTG, including ones that you may use to enchant other players as you please.

Enchantments include basic spells that you cast onto yourself, as well as others that enchant players, creatures, planeswalkers, lands, and even the battlefield itself.

The range of enchantments that you may cast on other players includes crippling life-siphoning spells, control spells that allow you to take over their cards, and much more. 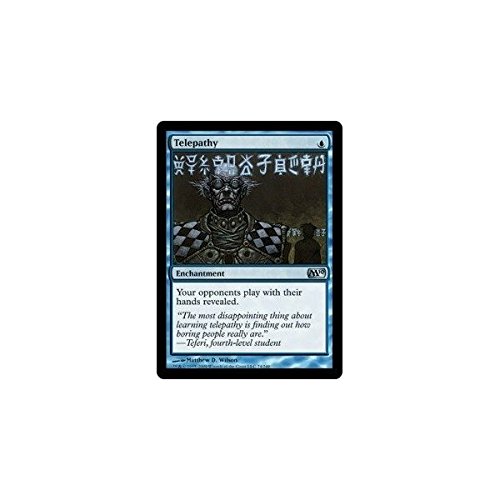 This card is a perfect example of how you may enchant not only another player, but ALL opponents with a single Enchantment. When you cast Telepathy, your opponents have to play with their hands revealed. The torture only ends if by some chance your Enchantment is destroyed, removed from the game, or exiled.

FAQs About Can You Enchant Other Players

Can You Enchant Another Player During Their Turn?

Unfortunately, most of the time enchanting someone during their turn is impossible. The only exceptions to this rule are typically enchantments that happen to have Flash. Otherwise, you need to wait until your turn to play an enchantment, period.

Can You Use Enchantments on a Creature?

There are numerous enchantments that allow you to take control of another players’ creature. Most of these spells are straightforward; simply place them on the creature and take it to your side of the board. Until the enchantment is removed, the enchanted creature remains under your control.

Is It Possible to Control a Creature You Don’t Own?

It is 100-percent possible to control a creature with an enchantment. Powerful enchantments, mostly rare ones, do grant just this ability. However, most of the time enchantments are used to either boost or disable a creature.

Enchanting other players in MTG is quite possible and frankly happens a lot. That said, the type of enchantment cards that enable you to do so are a bit rarer than most uncommon and rare cards.

If you do get your hands on some of these enchantments, avoid using them on the first creature your opponent plays. Wait until they summon a real bad boy and then take control!

Thanks for reading, hopefully we cleared up all your questions!