Magic: the Gathering can sometimes be like a fast-paced game of ping pong. The most exciting games will have players lobbying spells back and forth at each other at a high-speed, constantly stopping each other’s strategies in their tracks.

One of the best ways to up the ante or prevent opponents from taking an action against you is with counterspells. These are some of the strongest spells in the game because they help you preserve any advantage you have by preventing your enemies from getting the upper hand.

But what are the best counterspells in MTG? We strive to answer that question and more in this post. Keep reading to dive into the topic of counterspells…

Use These Links to Navigate this Guide >>
What is a Counterspell?
Best Counterspells in MTG
Counterspell Questions
Wrap Up

What is a Counterspell?

There are some permanents that may have an ability that says something like, “when this card enters the battlefield, counter target spell,” but we are not counting those as counterspells. For the purposes of this article, we will be looking purely at instants.

Furthermore, you may notice a trend in the cards we include…they’re all blue. The reason for this is that blue is well-known as the best color for counterspelling. In narrowing down our list to just ten cards, we felt that the strongest were all naturally blue. 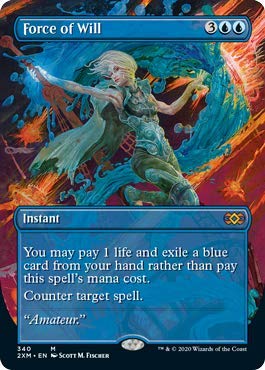 Force of Will is what most seasoned Magic players will think of when you say the word “counterspell.” It is undoubtedly one of the most powerful counterspells in the game.

You may initially be wondering why. What makes it better than any other counterspell? The main reason it’s so good is the fact that you can pay one life and exile a blue card from your hand instead of paying the cost listed at the top of the card.

Essentially, you can cast Force of Will at any time. You can even cast it on turn one if you happen to start with it in your hand. 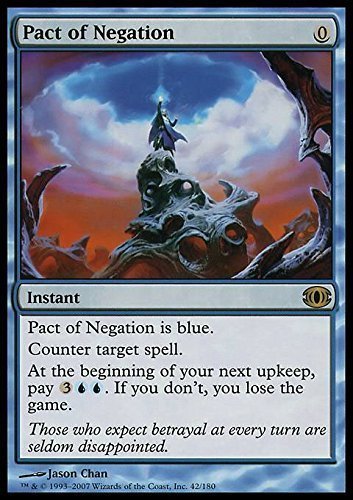 Here’s a rather complicated counterspell. It works much like its name implies: you make a “pact” to negate a spell. The benefit you’ll get is a “free” (for now) spell that will stop one of your opponents from casting something.

You’ll pay for it later, though. On your next turn, if you don’t have three generic and two blue mana to throw at Pact of Negation, you’ll lose the game. This isn’t necessarily an issue, though, and you should only cast it if you know you can pay the cost on your next turn.

We look at Pact of Negation as a last resort. You can use it when you’re all tapped out on mana and someone else at the table is doing something crazy that you need to stop, such as a board wipe when you have a clear board advantage or something. 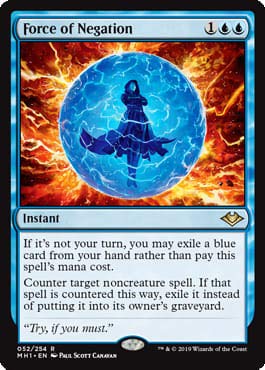 However, if it’s not your turn, you have the option of exiling a blue card from your hand instead of paying the mana cost to cast it. It’s always nice to have options for how you get a card out. That’s why Force of Negation works particularly well when you’re all tapped out of mana and still like to have a counterspell on hand.

Once you cast it, it not only stops a noncreature spell – it exiles it. Because it doesn’t go to your opponent’s graveyard, they’ll have no way of casting it uninterrupted going forward (unless you’re playing a format in which they can have multiples of the same card in a deck). 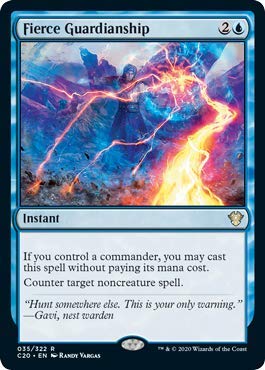 We picked this one because it’s specifically excellent for Commander. If your Commander is out on the battlefield, you can cast Fierce Guardianship for free.

After being casted, it just counters a noncreature spell. It’s a pretty straightforward counterspell that really doesn’t have a downside. 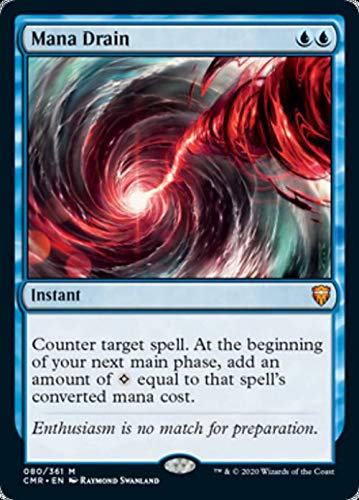 If you had to guess what Mana Drain does, you’d probably be able to form an accurate idea just from its name. You pay two blue to cast it, and it counters any specific spell.

But there’s a bonus. When your next main phase rolls around, you get to add one colorless mana for the countered spell’s converted mana cost. It literally drains the mana from an enemy’s spell and gives it to you. 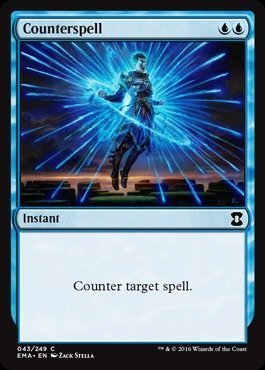 Counterspell is a very no-frills sort of spell. You pay two mana, it counters a spell. It’s as simple as that.

Sometimes, however, simple is good. This is an all-around decent spell to have in a blue deck, and it costs very little mana. You’ll be able to get it out fairly easily and it’s simply nice to have around when you need something to fall back on.

In at least one way, Cryptic Command is sort of the opposite of Counterspell. Unlike Counterspell, it’s far more complex, offering the caster four different options. You can select which two you want to happen.

You can simply counter a spell, bounce a permanent back to the owner’s hand, tap all an opponents’ creatures, or draw one card. Options are never a bad thing in Magic: the Gathering. You never know which of these will be most useful to you at the time you’re casting it, which gives it a sort of multifunctionality. 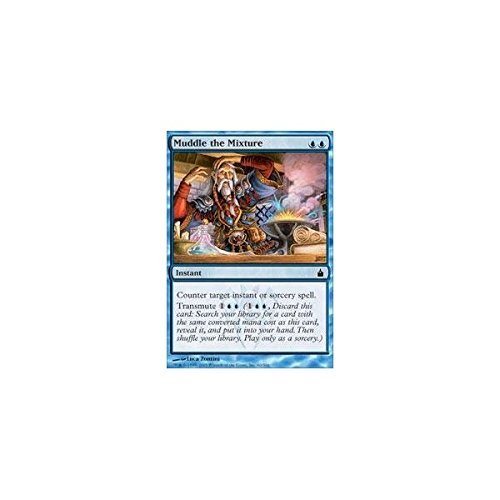 Muddle the Mixture is good for the same basic reason Cyptic Command is: it gives you a choice. You can cast it to counter an instant or sorcery, which could be very useful.

On the other hand, you can pay its transmute cost to basically “transmute” it into another card in your library. After paying that cost, you discard it and search your library for a card with the same converted mana cost as Muddle the Mixture, which is two.

In blue, there are lots of powerful spells that cost two mana. Muddle the Mixture could allow you to search for potentially the perfect solution to an issue on the battlefield. 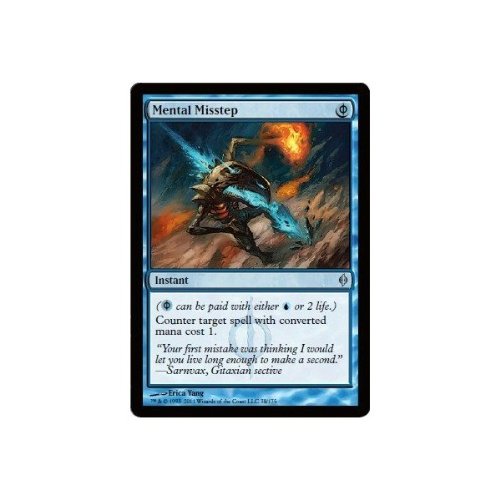 One thing that makes a card especially strong is the ability to pay its cost in different ways. Mental Misstep presents you exactly that benefit with the incorporation of phyrexian mana, which is the concentric half circle symbol at the top of the card.

Phyrexian mana can be paid with a single colored mana or two life. Don’t forget that life is a resource, as well, in Magic: the Gathering. You shouldn’t shy away from paying the cost in life if you otherwise don’t have a single blue mana open.

Unfortunately, Mental Misstep’s focus is a little narrow in that it can only counter spells with a converted mana cost of one. But that makes it especially devastating in the early game when people are more likely to cast cheap spells like that.

Finally, we’ve picked Flusterstorm for our list. It’s not necessarily a hard counter – your opponent can still cast the instant or story it’s stopping if they pay one generic mana. However, if they’ve spent all their mana on that turn or they don’t care enough to pay extra for it, Flusterstorm will counter it.

The real benefit here, though, is its second ability, Storm. Storm allows you to copy the card each time for any spells that were cast previously in the same turn. You’re essentially getting to cast Flusterstorm over and over again, choosing other spells for each copy.

That’s what makes it a combo-breaker. If one of your enemies is casting a bunch of cards together to make a devastating combo, throw out Flusterstorm to break it.

Are counterspells good in EDH?

Counterspells are good in every format – not just EDH/Commander. Magic: the Gathering requires interaction. Players must be able to respond to threats looming over the table, or else they’ll just get stream rolled time and time again.

This isn’t a game where you just sit there and mind your own business. When someone casts something threatening – and they will – you need an answer to protect yourself. Counterspells are perfect for this purpose.

In EDH, a format where games naturally take longer and players are therefore able to build larger mana bases, you could argue counterspelling is even more important. Not only will it be easier for you to cast the counterspells, but your opponents will have way more options that could be dangerous for you.

Is Mana Drain better than Counterspell?

Yes, Mana Drain is leaps and bounds better than Counterspell. It does the exact same thing, counter a target spell, but goes the extra mile by giving you that countered spell’s converted mana cost in your next main phase.

There are some situations where an amount of mana is too much mana, but that’s uncommon. You’ll generally be able to find a use for that mana, so extra doesn’t hurt.

But Mana Drain and Counterspell are both still great counterspells. If you’re able to, consider incorporating both into your deck.

How many counterspells should I have?

If you ask how many of something you should include in a deck in Magic: the Gathering, aside from strict format limitations, the answer will usually be that it depends. The same applies to counterspells.

How many you should and can include in your deck will depend not only on the format, but on the type of deck you’re playing. Some colors simply aren’t as good at counterspells, so you won’t even be able to include many in your deck. Others, like blue, offer you an abundance of options.

Another thing to consider is your strategy. If you’re playing a creature-heavy deck, having a couple counterspells in your library to protect your creatures is wise. Since your strategy doesn’t revolve around counterspells, though, there’s no need to go overboard.

On the other hand, if you’re playing a really controlling deck, counterspells will be your best friend. Consider packing plenty to stop your opponents from taking actions that harm you.

At the end of the day, though, you’ll still always want to play test your deck. Give it a few test runs against your friends so you can identify its weaknesses. That way, you’ll know if you have too many or too few counterspells.

Can you counter a Commander?

Yes, you can counter a Commander as someone else is casting it. They’re spells just like any other.

Interestingly enough, though, you can also counter a counterspell. If you’re trying to cast your Commander, then, and someone attempts to counter it, you can respond to that counter with a counterspell of your own.

Counterspells are a healthy part of most balanced decks. You need them to defend your permanents or to stop enemies from getting the upper hand.

They’re still far from the only thing you should have in your deck. If you’re building a Commander deck, you may also want to think about adding some mana rocks. Here is our list of the best MTG Commander mana rocks for you to consider.