Home » MTG » Does Deathtouch Affect Planeswalkers? Everything You Need to Know!

The Deathtouch ability is one of the most feared of all creature capabilities in Magic the Gathering. Planeswalkers are equally or even more so feared.

But, the real question here is does Deathtouch affect Planeswalkers? 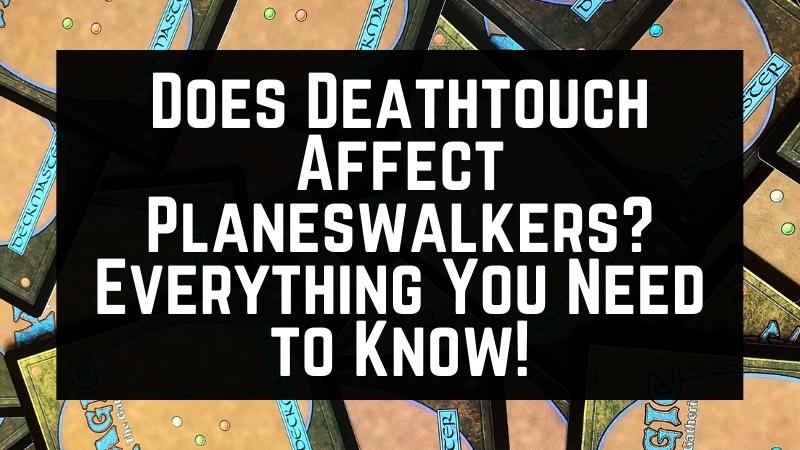 Read on below for the answer.

Do Deathtouch Creatures Work Against Planeswalkers?

Creature cards with Deathtouch, a deadly static ability for MTG creatures, are among the most lethal in the entire game.

That said, the Planeswalkers cards are also incredibly powerful and more feared than most card types in MTG.

Planeswalkers are diverse creature-like cards that mix powerful activated abilities, static abilities, and much more to present some of the most dangerous cards in the history of Magic.

But, as Planeswalkers are not creatures, and therefore can’t attack or block in the same manner as a creature does, they can not be directly dealt damage by a Deathtouch imbued creature.

It is important to note here that in some very rare cases a legendary Planeswalker may have the ability to act and be counted as a creature. In these almost non-existant cases, and only then, does Deathtouch affect them.

However, that isn’t to say that Planeswalkers can’t affect Deathtouch creatures… because indeed they can and do.

Planeswalkers may have the ability to destroy, tap, untap, exile, and even take control of creatures that opponents control.

In some cases, the creature must be attacking or defending for the Planeswalker to affect it, but that’s the exception, not the rule.

FAQs About Deathtouch and Planeswalkers

Planeswalkers are a card type unto themself, they are not creatures. Further, they do not take damage like creatures(or like players).

What Happens when a Planeswalker Takes Damage?

When a Planeswalker takes damage(which must be dealt to them directly) it loses loyalty counters rather than life or toughness. There is no exception to this rule.

Can A Creatures Block for a Planeswalker?

Planeswalkers are not able to block, and, no, other creatures may not block for them. Likewise, they can not attack either.

Deathtouch is one of the top static abilities that you and your MTG creatures really don’t want to clash with on the battlefield.

But, as deadly as the ability is, it does not affect Planeswalkers in the slightest because they are different than creatures and don’t take damage.