Home » MTG » Does Deathtouch Kill When Blocking? (The In-depth Answer)

Creatures are among the most popular card types in Magic the Gathering decks, and Deathtouch is one of the very best static abilities a creature may have.

But, the real question we’re exploring here is: does deathtouch kill when blocking? Or, does it only kill while it’s attacking? 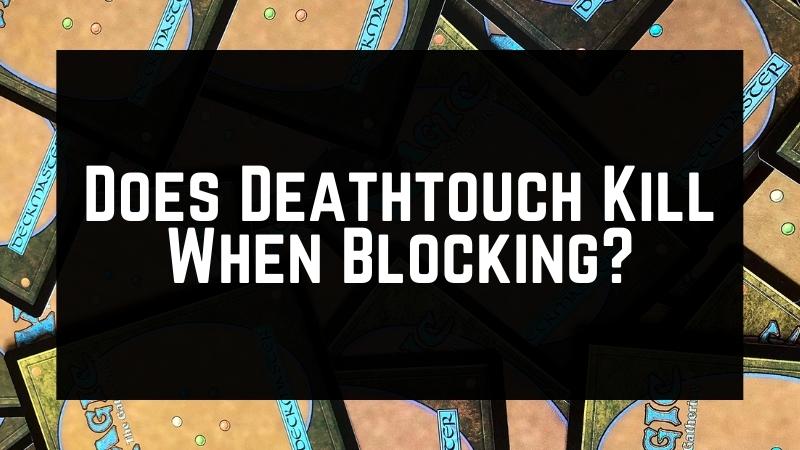 Read on below and explore the full and thorough answer!

Do Creatures With Deathtouch Kill When Blocking?

In MTG, the attacking and blocking phases occur simultaneously when a player declares which creatures they are attacking with and which players they are targeting.

If a defending player controls a Deathtouch creature and uses it to block, it may indeed kill the attacking creature while blocking.

But, that isn’t always the case, however, because sometimes the blocker doesn’t actually get to attack back. If the attacker is stronger, the blocking creature dies before it exchanges even a point of damage.

In the case the dead blocker had Deathtouch, it doesn’t make any difference. The creature would still die before getting the chance to deal any damage.

How Exactly Does the Blocking Phase Work?

Once the attacker has declared what’s happening, the defending players have their chance to react. This stage is known as the blocking phase. It is the part of the turn when the defender declares which creatures will act as blockers, and which attacking creatures they will block.

Under normal circumstances, the creatures may end up dead if they don’t have a high enough level of toughness to survive the attack(s). When a creature dies, it’s sent straight to the graveyard.

FAQs About Deathtouch Killing When Blocking

Does Deathtouch Kill While Blocking?

How Does Deathtouch Work With Multiple Blockers?

Deathtouch works the same way with multiple blockers as any creature cards do. The main difference is that all of the blockers will more than likely die before they do any good because the Deathtouch ability may kill them instantly. In that sense, there is very little good reason to use more than one creature to block an attacker that has Deathtouch.

Deathtouch kills any creature that it touches, including other creatures with Deathtouch. If by chance both the attacker and blocker have Deathtouch, the attacker wins by default. That’s because it’s the first one to deal damage. Further, in this case, even one point of damage is automatically lethal.

The bottom line? Yes, Deathtouch creatures do kill the opponent’s attacking creatures when they are blocking.

Although, if the Deathtouch creature doesn’t have enough toughness to withstand the attack it won’t hit back. That means it won’t kill the attacker either. Even more, it will die itself and go to the graveyard.

Hopefully we answered your questions about Deathouch kills while blocking! Thanks for reading!