Home » MTG » Does Deathtouch Work in a Fight (Answered)

Deathtouch is an MTG ability that automatically kills any creature that is dealt direct damage.

But, the real question here is whether or not the ability works in a fight.

Read on and explore the answer!

Do Deathtouch Creatures Work in Battle?

Not only does Deathtouch indeed work in a fight against other creatures, that is the only time that the ability ever comes into play at all.

Deathtouch creatures must land combat damage(in a fight) to another creature to kill it. It doesn’t matter how strong the other creature is or how much damage is dealt.

In a fight, a single blow from a Deathtouch creature is lethal even if it only technically deals 1 point of damage and the opposing creature has enough toughness to survive the damage. There isn’t much that can stop Deathtouch from killing the creatures that it clashes with.

Even abilities like Hexproof are no good against Deathtouch. Of course, there are always exceptions to the rule. In this case, Shroud is one such exception.

Creatures with Shroud are protected from all spells and abilities that the opponent controls. That means your Deathtouch ability disappears and your creature becomes only standard. 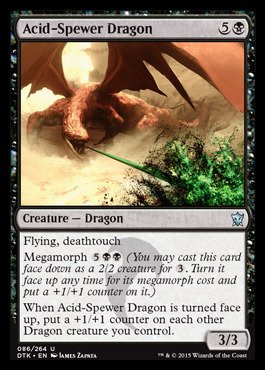 The Acid-Spewer Dragon is a fun 3/3 uncommon black Dragon creature. The card costs 6 mana to cast and hits the field with Deathtouch and Flying. In addition, it has Megamorph 7. That means you can play this card face-down as a 2/2 creature for 3 mana. Pay 7 mana and turn it face-up and add a +1/+1 counter onto it for each other Dragon you have out on the field.

FAQs About Deathtouch in a Fight

Are Deathtouch Creatures Worth It?

When Does Deathtouch Work?

The only time that Deathtouch actually works is in a fight between your creatures and those controlled by the enemy. In the attacking and blocking phases, depending on whether you are the aggressor or the defender, is when the actual kill strike occurs.

What is a Fight in MTG?

In MTG, a “fight” is when two or more creatures come against each other on the battlefield. During these fights, the attacker deals damage to the blocker first. If the defender’s creature survives the attack, it returns fire and deals damage equal to its strength back to the attacker.

Deathtouch works during the combat phases of fights between MTG creatures on the battlefield. The second that a creature with Deathtouch lands a singular point of damage against another creature, said creature is dead and gone.

Thanks for reading! Hopefully we answered all of your questions regarding how Deathtouch cards work in a fight.