Does First strike beat Trample, or does Trample stomp down First Strike creatures like it does most creatures on the field?

First Strike is a fierce combat damage-driven ability on the MTG battlefield, and so is Trample.

Below, we discuss the full answer, so read on!

First Strike enables your creatures to strike first in most of the combat action they see, including against Trample creatures. That does not, however, mean that First Strike automatically beats Trample.

Trample creatures are built tough so they can take a lot of damage, and they are also built strong so that they can hit hard. The whole point of Trample is, after all, to trample as many creatures at one time as possible.

The outcome of clashes between First Strike and Trample often boils down to how strong the Frist Strike creature is and how tough the Trample creature is.

If the creature with First Strike has enough strength to kill the Trample creature at the beginning of the combat phase, the Trample ability never has a chance to activate.

Example Card: Lord of the Pit 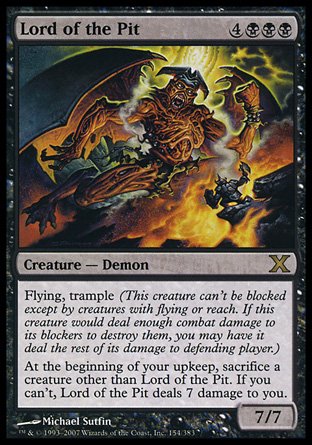 With Trample creatures, the toughness and strength is usually between 5/5 and 10/10, or even more. The Lord of the Pit for example is a 7/7.

In order to win a fight with a Trample creature, First Strike creatures must have a high strength and toughness as well.

Does First Strike Work with Trample?

First Strike works with Trample, just as it does with any other additional ability such as Deathtouch or Lifelink. When the combat damage is dealt to a creature, Trample is activated and all unblocked damage assigned to the first blocking creature should be blocked by additional defenders until it is all blocked. The remaining damage is taken from the defending player’s life counter.

Which is Better, Trample or First Strike?

Whether Trample or First Strike is better for you depends on your playing style, deck, and cards. Do you like giant creatures that demolish the battlefield, turn after turn? If so, Trample is the ability you need. If you like hitting fast with smaller but equally deadly enchanted creatures, First Strike is a better choice.

First Strike and Trample are both great for beating down the other creatures on the battlefield. Both have their pros, both have their cons.

The bottom line is that there is no black and white answer as to which ability beats the other, there are far too many factors that must be weighed in each time they clash.

First Strike beats Trample if they hit hard enough, the first time. But, Trample may come out on top purely because they are stronger and tougher than most standard First Strike creatures.

Thanks for reading! Hopefully, we answered all of your questions!