Home » MTG » Does Hexproof Protect From Destroy All Creatures? (Answered) 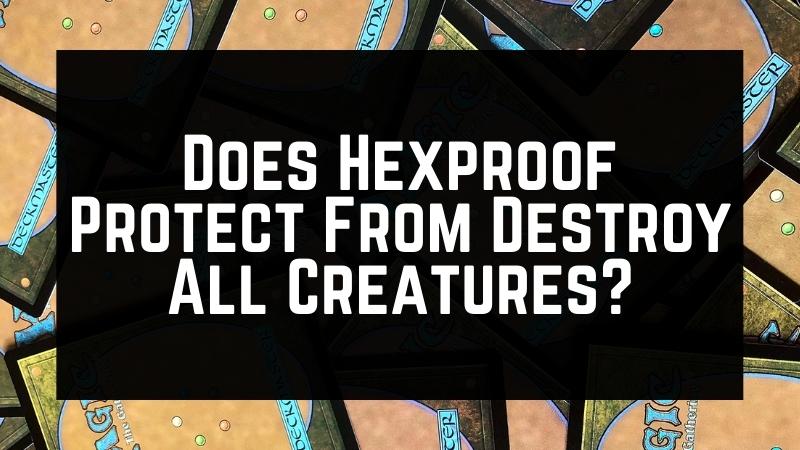 So, does hexproof protect from “destroy all creatures”? Read on below and find out for yourself!

Hexproof vs Destroy All Creatures

Cards with Hexproof are protected from many powerful spells and abilities other players may play against you. The ability makes it so your opponents can’t target you or your creatures.

But, unfortunately, Hexproof doesn’t protect against everything out there, including spells or abilities that destroy all creatures. These sorts of spells have often cause what is referred to as a board wipe.

Hexproof does not protect you, including the creatures and permanents you control on the battlefield, from board wipes and other spells and abilities that work in a similar manner.

FAQS About Hexproof and Destroy All Creatures

What Exactly Does Hexproof Protect Against MTG?

Hexproof protects players, permanents, and creature cards from spells or abilities used by other players to target something(such as a player, planeswalker, creature, or permanent). Further, the Hexproof ability is static, meaning it doesn’t need anything to occur to trigger or activate it. It is always active.

Hexproof is an evergreen keyword ability that prevents a permanent or player from being the target of spells or abilities played by opponents.

Does Destroy All Creatures Work Against Indestructible?

Spells and abilities that destroy all creatures are in essence absolutely useless against creatures imbued with Indestructible. They are not affected by such spells, rather they must be dealt with in other manners(such as removal or exile spells and abilities).

Which is Better, Hexproof, or Indestructible?

There is no right or wrong answer to whether Hexproof or Indestructible abilities are better. The fact is, both abilities are amazingly powerful if used properly. Generally speaking, the bigger the creature, the better Hexproof is. Likewise, the smaller the creature, the better Indestructible works. However, there are always exceptions when it comes right down to it.

Hexproof is a fan favorite when it comes to the 150+ abilities and mechanics found in MTG. But, unfortunately, it does not protect from “destroy all creatures” because such spells and abilities do not target anything specifically.

Thanks for reading! Hopefully we’ve cleared up any questions you had!