Does lifelink work on creatures? If you’re asking this question you need to drop whatever you’re doing and read on below!

Does Lifelink Work On Creatures?

Lifelink is an extremely valuable MTG ability that allows you to gain life points every time a creature with Lifelink that you control deals damage.

Unlike other abilities, we’re not talking about strictly combat damage either; Lifelink allows you to gain life points any time damage is dealt by a Lifelink source, period.

If you have a creature with Lifelink that also taps and deals direct damage to opponents or their creatures, these damage points also result in life gain.

So, does the ability work on creatures? Ab-so-freaking-lutely it does. In fact, most Lifelink life gain is from dealing combat damage to creatures. 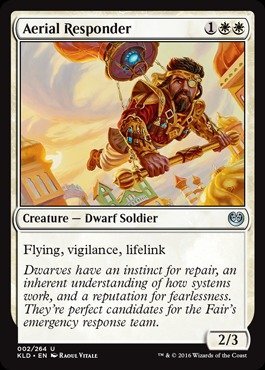 Aerial Responder is a mono-white Dwarf Soldier creautre card that costs 1 colorless and 2 white mana to cast. The card is Uncommon rarity, and for good reason; it has Flying, Lifelink, and Vigilance all in one, which makes up for it only being a 2/3 creature.

The question is, how would this particular card work on creatures? Pretty dang good, actually!

Now you cast an enchantment or aura that gives the creature a +1/+1 boost(or even better, a +1/+1 for each ability it has), or something similar, declare the attack(remember, you have vigilance so you don’t even need to tap it to attack).

What happens to the opponent? Well, unless they have a flying creature, or one that has the Reach ability, they won’t even be able to clash with you over the damage. That means they’d have to take it directly.

But, even if they did have a creature to block your flyer, they are still taking damage and you are still gaining life points before the exchange is over with.

Does Lifelink Only Work on Combat Damage?

No, Lifelink does not work strictly on combat damage. Lifelink creatures/sources produce life points whenever they deal damage points of any kind, including direct, combat, and ability-related.

Does Lifelink Work on Yourself?

Yes, you can absolutely attack yourself, or your own creatures, and use the Lifelink ability to gain life. The trick is to attack a tough creature with a weak creature, so they both live and you gain life as well. If you attack yourself directly, the damage is lost, and then gained back by Lifelink.

How Exactly Does Lifelink Work in MTG?

That said, any damage dealt to creatures at all, by Lifelink sources, results in life gain.

Thanks for reading! Hopefully, we answered any remaining questions you had!