Does Lifelink work when blocking creatures and/or direct damage? If you are asking yourself the question, you need to know the answer before your next game.

Lifelink is a beneficial MTG ability that enables you to gain life from damage you deal to other players and creatures.

But, does it work with blocking or not? Read on below and find out.

Does Lifelink Work When Blocking Creatures?

Lifelink is an ability in MTG that allows you to gain a life point for every successful point of damage you deal to a creature or player.

But, how does the ability work out in battle, when blocking attacks from creatures?

When a creature with Lifelink blocks an attack, if they have enough toughness to withstand the strength of the attacking creature, they get to return the attack with all their available strength.

In other words, if your Lifelink creature survives the first strike of an attack, and delivers combat damage back to them, you gain life points equal to the strength of your creature’s attack. 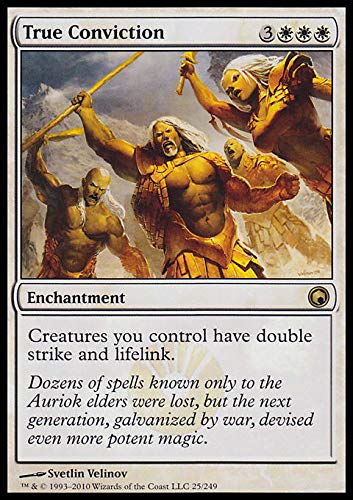 True Conviction is a powerful rare white Enchantment that costs 6 mana to cast and grants your creatures double strike and Lifelink. This is one of the best combat damage ability combos there is.

Think about it, all your creatures instatnly get to deal damage twice, even if they are blocking rather than attacking. Further, that means they gain life points for both sets of damage sent out.

FAQs About Lifelink and Blocking

Is Lifelink Good for Defending?

Yes, Lifelink works just as well defending as it does when attacking(so long as the creature doesn’t die while defending). Once the Lifelink creature blocks, it returns combat damage and you gain that much life.

Is Lifelink Good Against Multiple Blockers

The number of blockers available to defend against your Lifelink attack doesn’t make any difference to the amount of life you gain. What it does affect is whether or not your creature will live through the battle or not. The more blockers the opponents uses, the less chance your attacking creature will have enough toughness to survive.

Does Lifelink Work When Creatures Die?

As long as your Lifelink source deals damage, you gain the life points equal to said damage. It doesn’t make a bit of difference if the creatures or players you damage live or die. If you deal damage with Lifelink, you gain life points.

Lifelink works just fine when blocking, however, it may not survive to tell the tale to the other creatures out on the battlefield. You will still gain the life points equal to the damage your Lifelink source dealt though, even if it does die while defending.

Thanks for reading! Hopefully we answered all of your questions!