Building a tribal-themed deck is one of the easiest types of decks to build. All you need to do is pick a specific type of creature from the huge variety that Magic: the Gathering has to offer, and begin adding cards to the deck that support that creature type.

There are tons of tribes available for you to choose, but easily one of the most popular is goblins. Are you looking for some goblins to pack your deck with? We’ve brainstormed and came up with this list of the best goblin cards in MTG for your consideration.

Use These Links to Navigate this Guide >>
What are Goblins?
Best Goblin Cards in MTG
Goblin Questions
Wrap Up

Goblins are everywhere in the media. There are books, movies, and TV shows that feature these small and ugly creatures, and each piece of media can have its own definition. So, what is a goblin in the Magic: the Gathering sense of the word?

Well, goblins are virtually the same in MTG as they are everywhere else. They’re small, typically unintelligent, and greedy. 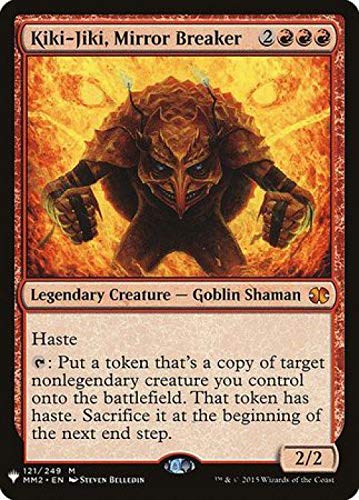 Ask any knowledgeable Magic player what the best goblins are in the game, and we’d be willing to bet Kiki-Jiki, Mirror Breaker would be one of the first ones to come to mind. This powerful goblin should never be underestimated because it allows you to make a token copy of any nonlegendary creature you control.

Furthermore, Kiki-Jiki gives that token haste. That means you can attack with it right away, which is a good thing, because the token must be sacrificed at the beginning of the next turn’s end step.

A popular strategy with this one is to use it to copy cards with ETB (enter the battlefield) effects. That way, that effect triggers again when you create the token. 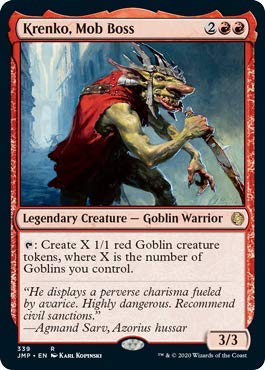 If you want to quickly overwhelm your opponents with a veritable army of goblins, go with Krenko, Mob Boss. By tapping him, you will generate X 1/1 red goblin tokens, where X is the number of goblins you already control.

In other words, Krenko doubles the number of goblins you have on the battlefield. You have to tap him to do so, but there are tons of cards out there that can help you untap permanents. Combine him with enough of these, and you may effectively be able to make an infinite goblin army to flood enemies with. 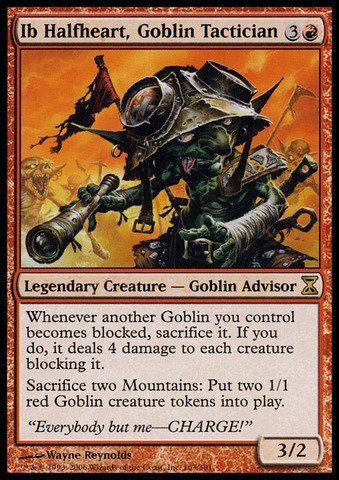 Flooded with lands? Ib Halfheart, Goblin Tactician can help you take care of that with his second ability that allows you to sacrifice lands to generate goblin tokens.

The best thing about Ib Halfheart, though, is that it turns all your goblins into bombs. If someone chooses to block your goblins, you sacrifice them, and they deal 4 damage to creatures blocking them. Your opponents will repeatedly be forced to choose between taking the damage or potentially losing swaths of their own armies as your goblins explode on them.

Ib Halfheart also pairs really well with Krenko, Mob Boss. Of course, it would work well with just about any card that generates cheap goblin tokens. 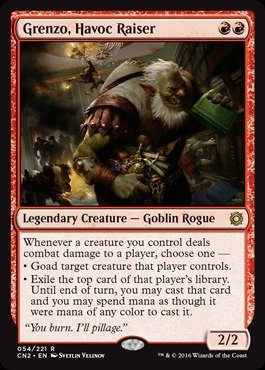 He may seem underwhelming initially, but Grenzo, Havoc Raiser is a fantastic goblin. Much like his name implies, he’ll reduce the battlefield to chaos in no time.

Keep in mind that goblin tribal decks usually focus on getting tons of goblins out on the battlefield to attack with. Grenzo has an ability that will trigger whenever one of your many goblins (or just creatures in general) gets through to do combat damage to another player.

When that happens, you’ll get to choose between either goading one of that player’s creatures or exiling the top card of the library and getting to cast it yourself. Goading is a surprisingly powerful key word. It means you can force an opponent’s creature to attack on their next turn, and they can’t attack you with it.

Wondering why Goad is useful? Well, it’s great for playing mind games and stoking the fires of rivalries at the table. Another benefit to it is that it increases the likelihood your opponent’s goaded creature will die as a result of being blocked or destroyed. 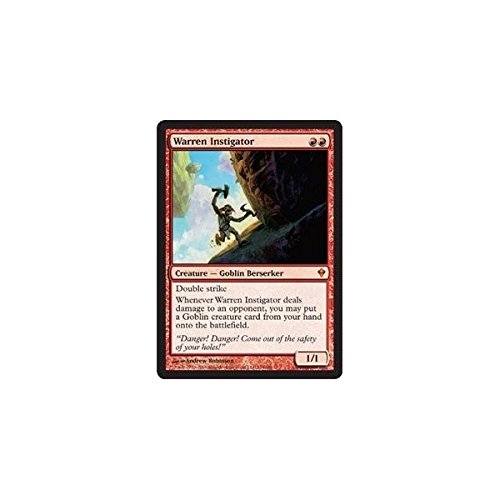 Goblins are best at getting out onto the battlefield quickly and cheaply. Cards like Warren Instigator underscore that strength.

Whenever Warren Instigator damages an opponent, you get to put a goblin card from your hand onto the battlefield. This is essentially like getting a free creature, further expanding your growing goblin army.

Warren Instigator has double strike, too, which means it hits twice. If you want to add insult to injury, consider pumping him up with +1/+1 counters or adding an equipment to make him deal more damage.

If you’re building a goblin deck, chances are, you’ll have a ton out on the battlefield very soon. With Goblin Piledriver, you can make your wave of goblins even more impactful.

That’s because, as you can see, he gets +2 to his power until the end of the turn when he attacks for every other goblin attacking with him. If you’ve generated a lot of tokens or otherwise have a bunch of goblins on the battlefield that you’re attacking with, Goblin Piledriver can easily become a finisher.

It doesn’t hurt that it has protection from blue, either. That just means blue cards cannot target or deal damage to it in any way. 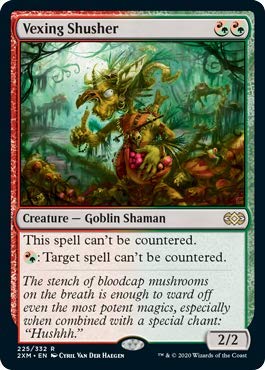 Finally – a goblin that isn’t purely red or red/black on this list, with the infamous Vexing Shusher. This is a crazy card to put in your goblin deck if you can incorporate some green.

First, it’s only two mana. And either one of those mana colors can be paid with either red or green, so it doesn’t matter if you’re missing one or the other.

Second, Vexing Shusher itself cannot be countered by your opponents. It’s coming out no matter what when you cast it. When it’s out, you can pay another red or green mana to prevent spells from being countered. No more having to deal with frustrating blue spells that stop one of your own spells in its tracks. 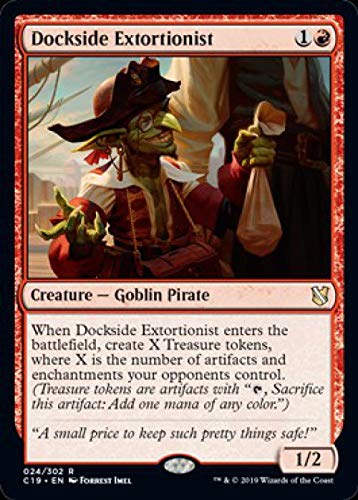 Not only is the artwork on Dockside Extortionist fun, but the card really lives up to its name. For just one red and one generic mana, this goblin pirate will create a number of treasure tokens equal to the number of artifacts and enchantments controlled by your opponents.

As a note, a treasure token is an artifact that can be tapped and sacrificed to add one mana of any color to your mana pool. Basically, Dockside Extortionist allows you to rapidly build up your mana base if you’re a little behind or you need to cast something costly. 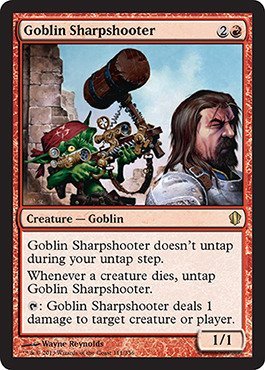 Goblin Sharpshooter is a simple card. It’s great for getting rid of small creatures or simply pinging opponents, as you can tap it to deal a single point of damage to a creature or player.

It doesn’t untap normally during your untap step, but it will untap whenever another creature dies. If you’ve got tons of goblins attacking, it’s likely many of them will die, making it easy to untap Goblin Sharpshooter. This also applies, however, to when your opponents’ creatures die, so it will untap often.

In a deck where you’ll likely have tons of goblin creatures, Legion Loyalist is a must-have. Whenever it attacks alongside a minimum of two other creatures, those creatures will get first strike and trample for that turn. They will also become unblockable by creature tokens.

If you’ve created a large number of goblin tokens, Legion Loyalist could be another finisher card that empowers them. Consider adding it to any goblin tribal deck.

Who is the best goblin?

With all these goblin options out there, you might be wondering, which one is the best? Well, in terms of MTG, we’d have to go with Kiki-Jiki, Mirror Breaker as the best overall goblin.

This isn’t just because he’s a goblin card, though. If he were literally any other tribe, we’d still say he’s incredibly powerful. The ability to copy any nonlegendary creature card you control gives you unlimited combos to do. You can check out this EDHREC combos page to see just a sampling of combos people use Kiki-Jiki for in their Commander decks.

Does Goblin King count as a goblin?

If you’re asking whether Goblin King is a goblin, we’d be willing to bet you’re looking at a really old printing of it, such as the one in the above picture. Older printings of the cards say, “Summon Lord” instead of saying “Creature – Goblin” on them.

Lord was an old creature type that benefited creatures of a specific tribe. Goblin King, for example, gives all goblins +1/+1 and mountainwalk. However, the term “lord” has become obsolete and newer printings of Goblin King say “goblin” as his creature type.

In other words, yes, Goblin King counts as a goblin.

If you’re feeling a little nervous about building a deck, going for a single tribe can make the process much easier. However, some tribes have more support than others, meaning they have more options to include in your deck.

Goblins are one example of an excellent and old tribe that have been around since Alpha. This means they have tons of support, and it’s easy to build a goblin tribal deck.

Slivers are another ancient and powerful tribe. You can learn more about them in our guide to which MTG sets have slivers.