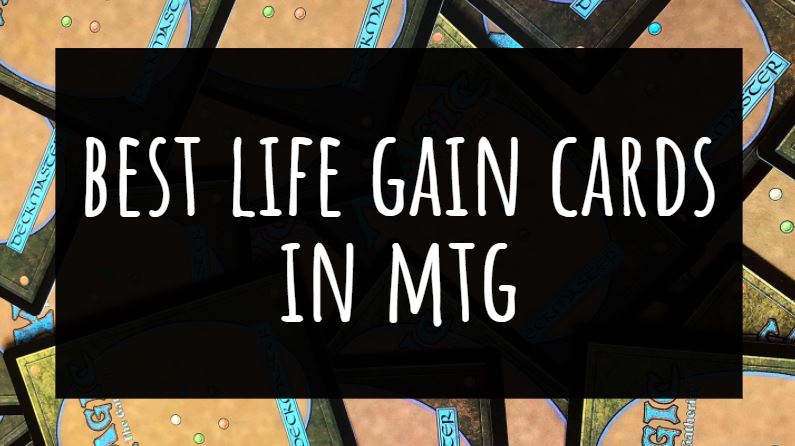 If you were to put it as simply as possible, the objective of any game of Magic: the Gathering is to reduce your opponents’ life points to zero. You can’t get a more basic explanation of this complex card game than that.

But just because your life total is dropping dangerously low, doesn’t mean you’re destined to end up at zero. There are tons of cards out there designed to help you slow this process by granting you life points.

Use These Links to Navigate this Guide >>
What is Life Gain and How Does it Work?
Best Life Gain Cards in MTG
Life Gain Questions
Wrap Up

What is Life Gain and How Does it Work?

No matter which Magic format you’re playing, everyone starts with an allotment of life points. In a Standard game, the number you’re given is twenty. In the ever-popular Commander format, all players start with twice that much.

Your objective is to win the game, and the easiest way is to reduce everyone else’s life total to zero. This isn’t always as straightforward as you think it may be, because life points are kind of multidirectional. They don’t just go down – they can also go up, or even be locked into place so they can’t change at all.

A card that gives you life points, causing your total to rise, is called a life gain card. Some colors are much better at this than others. Out of the MTG colors that are available, life gain tends to be something that white is best-known for. Green and black are becoming increasingly better at life gain, too, especially with recent Strixhaven cards. 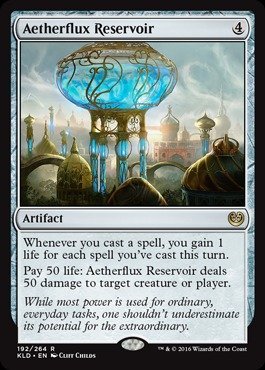 In the later parts of a game, you’ll have a larger pool of mana to work with, so you’ll often be able to cast multiple spells per turn. That’s when Aetherflux Reservoir is most useful, because it will give you one life point for each spell you cast on your turn.

However, that’s not the strongest part of the card. The best part is its second ability, which lets you exchange 50 life points to do 50 damage to a creature or opponent. This is a finisher card designed to let you blast someone out of the game.

Ideally, you combine it with plenty of other life gain cards so you can get above 50 life points quickly. This is a popular one to use in Commander decks that are focused on life gain as a strategy. 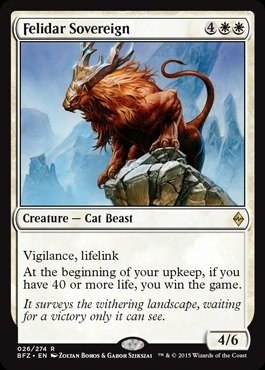 Felidar Sovereign doesn’t gain you life immediately when you cast it. However, if you’re playing a life gain-themed deck, you should probably have it in your deck.

This is because you will win the game if you have Felidar Sovereign out on the battlefield and you have 40 or more life on your next upkeep after casting it. Unfortunately, this does mean everyone will be targeting it if you’ve reached that goal and cast it. Be prepared to use tons of counterspells when you play this notorious MTG cat card. 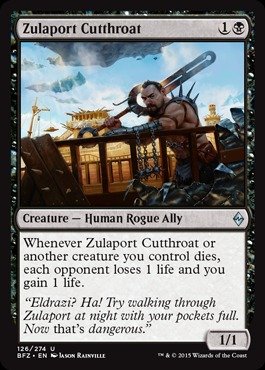 If you’re willing to make other players at the table annoyed with you, consider putting a Zulaport Cutthroat in your deck. It will cause you to gain one life and your opponents to lose one life for each of your creatures that dies, including itself.

It’s a strong defensive measure. Zulaport Cutthroat prevents enemies from killing large numbers of your creatures, since it means they’ll be harmed in the process. 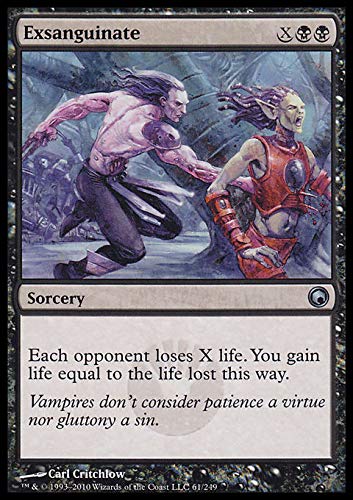 The best part about Exsanguinate is that it’s as ruthless as you want it to be. Thanks to the X value in its mana cost, you can put as much mana as you want into it beyond the two black mana it costs by default. Whatever X is dictates how much life all your opponents lose, and how much life you gain.

For an extra devastating effect, save Exsanguinate until you have a large mana pool. Pumping it full of mana could potentially finish someone off, provided you have enough. 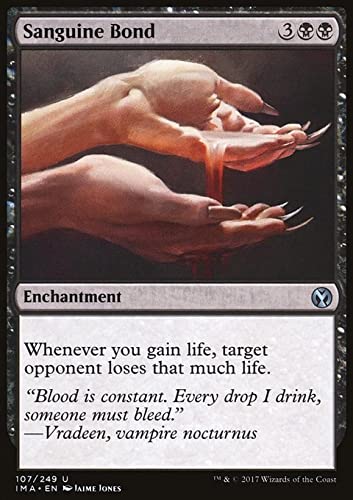 Sanguine Bond is a popular choice in vampire tribal decks. Vampires often have the lifelink ability, which means you gain life for each point of combat damage they do, whether they are attacking or blocking.

You can see how that would work well with Sanguine Bond. As you are gaining life, it is damaging your opponents for each point of life you gain. If you’re not going to run it in a vampire deck, consider using it alongside a bunch of other life gain cards or cards with life link. 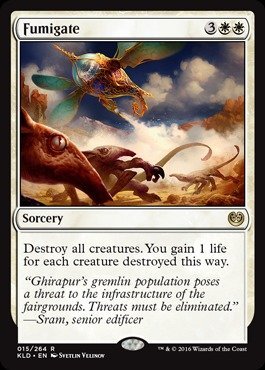 Board wipes are must-haves in just about any deck you could possibly construct. They help slow down the game when the battlefield is stacked against you by eliminating all cards of a particular type.

Fumigate is an example of a board wipe. It will destroy all creatures on the table, then give you one life for each creature it destroys. Honestly, the life gain aspect isn’t the best part of it – the board wiping aspect is. Nonetheless, it’s still a powerful life gain card that you’ll probably want to include in a life gain-oriented deck. 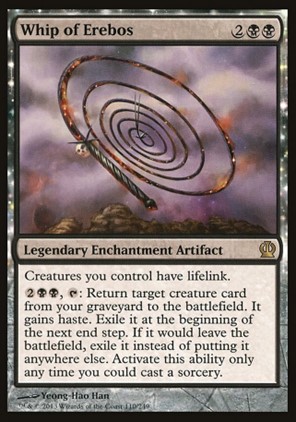 By itself, Whip of Erebos isn’t strictly a life gain card. It will not personally change your life total for the better. However, it gives all your creatures lifelink, which means your creatures will allow you to gain life as they do damage in combat.

It has an additional ability, too, which can bring a creature back from your graveyard until the next end step and give it haste. The best part of the card, though, is that it gives all your creatures lifelink. It would go well with Sanguine Bond.

You’re getting two great benefits from Alhammarret’s Archive. The first is that it doubles the amount of life you gain whenever you gain life. Its first ability is perfect for any life gain deck.

The second benefit is that it doubles the number of cards you would draw beyond your first one on your turn. Again, card draw is always a beneficial thing to incorporate into your deck, so this second ability isn’t anything to scoff at. 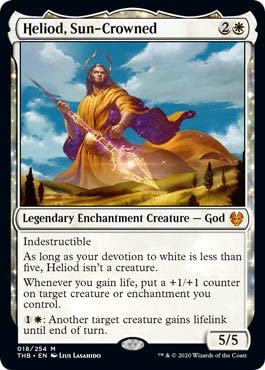 Heliod, Sun-Crowned is an amazingly useful god card. Not only is it indestructible as a god, but it lets you buff your creatures by placing a +1/+1 counter on them whenever you gain life. You can even buff other god cards that aren’t technically creatures yet, thanks to the fact that it lets you put counters on enchantments.

To make matters even easier, Heliod’s last ability can give lifelink to a creature until the end of the turn. Use this whenever you’re attacking or blocking with a creature that doesn’t already have lifelink. You’ll get to pump something else on the battlefield up with a counter.

Heliod famously pairs well with Triskelion. With these two cards, there’s an infinite combo in which you can give Triskelion lifelink, do damage with it by removing a counter, and then put another counter on it from Heliod’s ability. 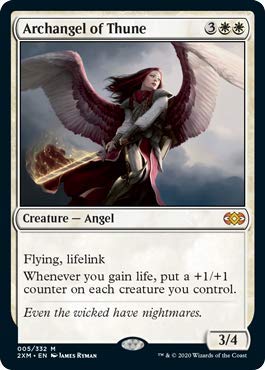 If you’re playing a deck with Heliod, Sun-Crowned in it, you probably want to include Archangel of Thune. This powerful angel does something similar: she applies +1/+1 counters to creatures whenever you gain life.

Is life gain good in MTG?

Historically, life gain hasn’t been the most powerful strategy you could go with. The problem with life gain as a strategy is that it doesn’t affect your board state at all – it simply changes your life total. Without something connecting your life total to a tangible advantage, such as a life gain-related win condition like Felidar Sovereign, you are only delaying the inevitable.

This is why you won’t see many (if any) competitive life gain decks in formats like Standard or Modern. Oftentimes, these formats need you to develop a strong advantage on the board quickly. Strategies like promoting your board state or drawing cards are more powerful.

Life gain is much more viable in Commander/EDH. That’s because this format is longer and games tend to be slower, making it possible for you to build up mana and life points. There are also more win conditions for you to access in Commander, including the aforementioned Felidar Sovereign and Heliod, Sun-Crowned cards. In addition, Commander already starts you at a higher life total of 40, which is helpful.

In terms of competitive play, no. Mono white life gain’s only viability is in Commander with the Heliod infinite combo we mentioned previously.

It’s worth mentioning that white tends to be best at life gain, as that is part of white’s portion in the color pie. Alone, though, white has some glaring weaknesses, like its lack of ramp and card draw abilities. If you’re going to consider using white, think about combining it with other colors to eliminate those weaknesses.

Life gain may not be the strongest strategy to go with in Magic: the Gathering, but that doesn’t mean it’s totally worthless. The best thing about the game is that there are so many combos to create and cards to utilize.

Chances are, we missed a life gain combo that would be devastatingly effective. With a little research and experimentation, maybe you could discover the next combo that puts life gain back on the map.