Some Magic: the Gathering players take great pride in buying the cheapest cards possible and building the cheapest decks. This pride in thriftiness has created formats such as Pauper, which don’t allow you to use cards above the common rarity.

However, other players might be proud instead of the exact opposite: having the most expensive cards available. For those types of players, masterpieces will be particularly interesting, because they’re oftentimes both rare and expensive.

In this list, we’ve gathered several of the most expensive masterpieces in MTG. It’s important to note, though, that these cards are not always readily available, so some of the links on our list don’t go the masterpiece version.

Additionally, prices are subject to change. Magic: the Gathering cards are very much like the stock market, and can drop in value quickly. The cards on this list were just the most expensive at the time of writing, which is the summer of 2020.

Use These Links to Navigate this Guide >>
What is a Masterpiece?
Most Expensive Masterpieces in MTG
Wrap Up

What is a Masterpiece?

We’ll start with the basics, in case you’re not familiar with what a masterpiece is. Masterpiece cards are sort of like mini-sets that appear within a few larger sets of cards. They consist of one-of-a-kind reprints of other cards from MTG’s history.

They’re extremely rare, and considered higher in rarity than mythic cards. In some way, they are usually related to the theme of the larger set they’re printed in.

At this point in time, there are only three sets of masterpieces: Zendikar Expeditions, Kaladesh Inventions, and Amonkhet Invocations.

There are two ways you can get masterpieces: either through buying booster packs from their set and drawing one by chance, or purchasing one directly. Currently, the number of sets containing masterpieces is kind of small.

Most Expensive Masterpieces in MTG

Flooded Strand was originally printed in the Battle for Zendikar set. It’s what you would call a fetch land, which means you can pay a life point and sacrifice it to search for a Plains or Island card from your library to put on the battlefield.

This may sound inconvenient to a beginner, but it’s an extremely powerful effect. It lets you find a land you actually need, and also helps slim down the remaining lands in your library. That means you’re less likely to draw a land you don’t need in the late game.

Many would tell you that Force of Will is one of the most powerful cards in the game. You can choose to pay one life and exile a blue card from your hand or pay the card’s mana cost to counter a spell.

This gives you immediate access to a counter spell, even in the beginning the game when you only have a few lands on the battlefield. The power of this card definitely contributed to its cost, because it earned a place on this list of the most expensive masterpieces easily. 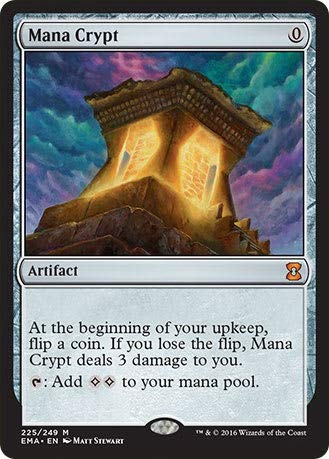 This is a card that might stun beginners. Everything is left up to chance, and you could lose life if you fail the coin flip dictated by the card.

But a skilled Magic player will tell you that life is just another resource to tap into. Mana Crypt lets you do exactly that, giving you two free mana each turn, and only a 50% chance of life loss.

Please note: The card pictured above is one of the printings of Mana Crypt, but it is not the masterpiece version. As a masterpiece, it is extremely difficult to find. 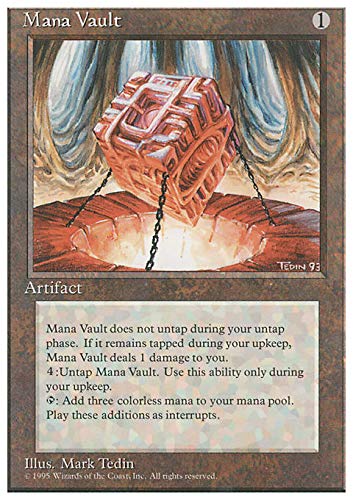 Here is another example of a card that might confuse Magic novices. At a glance, it seems like it only has one use – giving you three mana, then never untapping again.

Even if that’s all you used it for, though, you’d be tripling your mana. It only costs one to cast, and gives you three in return. However, people who use Mana Vault usually find ways to untap it, avoiding the damage it inflicts on you while tapped and getting the three mana from tapping it repeatedly.

Please Note: The card pictured above is Mana Vault, but it is not the masterpiece edition. 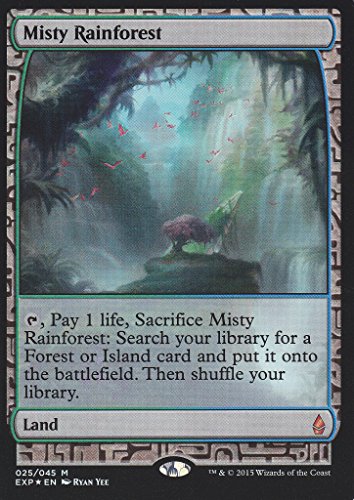 Like Flooded Strand, Misty Rainforest is another fetch land. It appeared first in Battle for Zendikar, as well.

It has all the same benefits: letting you pay one life and sacrifice it to retrieve either a Forest or Island from your library. This means you can get a green or a blue mana when you need one. 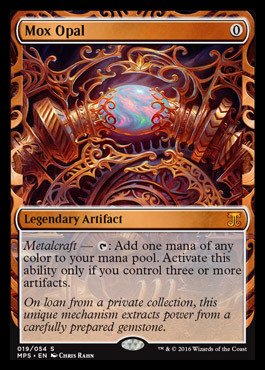 For a jaw-dropping cost of zero mana, you can get one of any color for free – provided you have at least three total artifacts out. What’s amazing about this card is you’re getting a colored mana. Most cards have some kind of colored mana cost, and Mox Opal makes it possible to partially pay for all of them.

Fetch lands are prized, which is why Polluted Delta earns a spot on this list. They’re powerful, beautiful, and rare - a combination that immediately adds up to a higher cost.

This alluring card will allow you to search for an island or swamp card at the cost of one life and sacrificing Polluted Delta. In other words, you can get one blue or black mana whenever there’s a need for it, which can be vital in multi-colored decks.

It shouldn’t be a surprise that yet another fetch land is making an appearance here. Scalding Tarn has all the same benefits of the other fetch lands, except it lets you search for an Island or Mountain instead.

There’s eye-catching artwork on the front, too. The steaming pool with what looks like a volcano looming over it something that could easily be put on display.

Sword of Feast and Famine 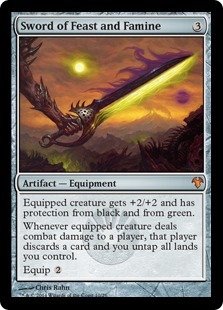 The swords are some of the most brutal artifacts in all of Magic’s history. Some are more powerful than others, though, and the Sword of Feast and Famine is one of them.

Hitting with a creature equipped with this sword allows you to untap all your lands while forcing your opponent to discard. There is literally no downside to this one.

Please note: The card pictured above is a real sword, but it is not the masterpiece edition.

The last card on this list is another fetch land: Verdant Catacombs. It lets you pull a swamp or forest card from your library after paying one life and sacrificing itself.

Again, fetch lands are powerful. That’s why they’re so expensive and rare – there’s a high demand for them, especially by collectors.

Masterpieces are, in some ways, the stuff of legends. You see them occasionally, but typically only in the hands of dedicated collectors or long-term players.

If you’re new to the game, you might not have any of your own yet. Don’t be disheartened, though – if you’re looking for masterpieces of your own, you can choose to buy boosters from the sets they’re in, buy individual cards, or even see if more are released in the future. Maybe one day, you’ll get to experience the thrill of pulling one from a pack further down the line.