Home » MTG » MTG Annihilator vs Hexproof: Does One Trump the Other? Find Out!

Annihilator is an MTG mechanic that first appeared with the release of the Rise of the Eldrazi theme. It’s an incredibly destructive triggered ability, but how does it fare against Hexproof? 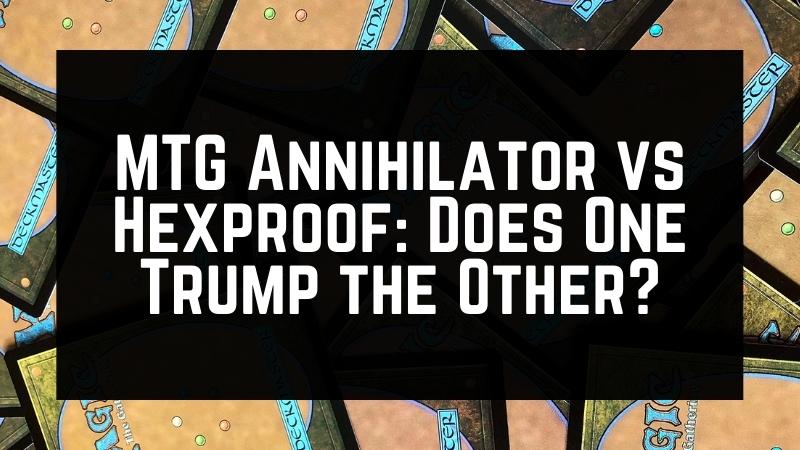 Read on below and explore the full answer!

How Does Annihilator Work MTG?

The trigged ability Annihilator kicks in when a creature imbued with the mechanic attacks.

When you use a creature with Annihilator to attack another player, the ability forces the defender to choose and sacrifice an equal number of permanents before declaring which creatures(if any) they will use to block with.

In the case that the attacking creature with Annihilator is targeting a Planeswalker and the defender sacrifices it, the attack continues regardless of the fact that no damage is dealt. The defender must still sacrifice the correct number of permanents.

Does Annihilator Work Against Hexproof?

When the Annihilator ability is used against a defending player with Hexproof, there is no difference in the end result.

Hexproof only protects against targeted abilities, which Annihilator is not.

Annihilator forces players to target their own permanents for sacrifice, so Hexproof won’t help even in the slightest.

FAQs About Annihilator vs Hexproof

How Does Annihilator Trigger?

All it takes to trigger Annihilator is for the controlling player to declare an attack. Afterward, the defender must choose which cards they wish to sacrifice before declaring blockers.

What Does Annihilator Target?

Technically speaking, Annihilator doesn’t target anything. Rather, Annihilator forces the defending player to target and sacrifice a number of permanents they control.

Is Annihilator Better Than Hexproof?

Hexproof and Annihilator are both great abilities. That said, neither one is “better” than the other, generally speaking. In MTG, the best cards, and abilities, depend solely on your playing preferences, strategies, deck of cards, and more.

Annihilator is one of the toughest abilities out there. Thankfully, it more than likely won’t be reproduced in the future.

In regards to Annihilator vs Hexproof, the latter is useless as Annihilator doesn’t require the attacking player to target anything.

Thanks for reading! Hopefully, we’ve answered all of your questions about how Annihilator and Hexproof affect each other!