Looking for a way to buff one of your creatures in MTG?

There are many ways, but perhaps the simplest is to add a counter that gives plus a certain number to its power and toughness.

Artifacts frequently interact with counter mechanics like this. There are numerous artifacts with counters of all kinds available, and the effects they achieve can range from obscure to widely beneficial – not just providing buffs to creatures.

So which are the MTG artifacts with counters? In this guide, we’ll give you a list of the top 10 options.

Use These Links to Navigate this Guide >>
What are Counters?
Top 10 MTG Artifacts with Counters
Wrap Up 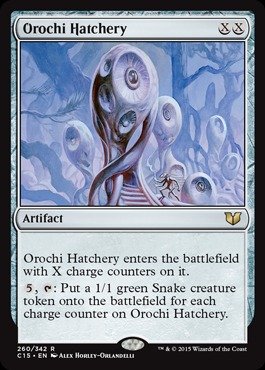 Counters can be a little difficult to define, because they result from a variety of effects.

Put simply, the counter itself just marks the effects on a card that last beyond one turn. For example, a planeswalker enters with X loyalty counters on it which are increased and decreased to use its abilities.

Or you might put poison counters on a player to indicate how much infect or poison damage that player has taken.

As an example, consider Orochi Hatchery. When you cast it, you use as many mana as you would like, and however much mana you spend indicates how many charge counters go on the card.

Later on, you can pay 5 mana to put 1/1 green snake creature tokens on the battlefield for each charge counter on the card. In this case, it’s therefore beneficial to have as many charge counters as possible on Orochi Hatchery.

Because there are so many artifacts that interact with counters in some way, we’re limiting our list to the top 10.

If you’re interested in seeing more artifacts with counters, though, you can check them out here.

So why did we include the artifacts we chose on our list? The ones we picked were chosen primarily because of how strong and noteworthy they are.

We chose not to include any artifacts from the Power Nine because they are extraordinarily rare and powerful cards. They are extremely difficult to find today.

However, you can read up on the Power Nine here if you’re unfamiliar with the subject.

With that in mind, the artifacts on our list are the following:

There are a few things that make Aether Vial so good. For starters, it has a remarkably low mana cost of one, meaning you will pretty much always be able to play it.

For another thing, you get its effect for free. Unlike other artifacts where you may have to pay a certain amount of mana to tap them for their ability, Aether Vial’s counters happen at no cost.

Last, you can freely tap Aether Vial once it’s accrued the amount of counters you want and use it to effectively “pay” the mana cost for a creature. It’s true that it would take time to build up to larger creatures, but you could use Proliferate to increase Aether Vial’s counters, or just use it to cast an extra smaller creature each turn at no cost to you. 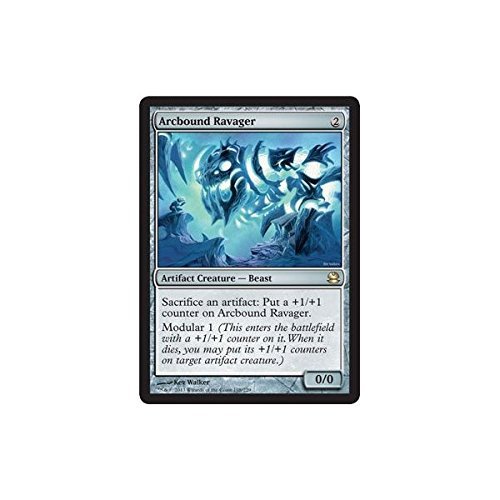 This card is infamous for a reason. To begin with, it has a meager casting cost of two that won’t be difficult to reach.

For another thing, you can add +1/+1 counters to it whenever you sacrifice an artifact. This doesn’t mean you have to needlessly get rid of them – rather, you can sacrifice said artifact in response to it dying whether in combat or as a result of being targeted by an opponent’s spell.

The interesting part is that because Arcbound Ravager’s text says “sacrifice an artifact,” you can legally sacrifice it to itself. Once it’s garnered a large number of counters, if it dies, you can sacrifice it to itself reflexively and move all those counters to another creature with its Modular ability.

Unlike some other cards on this list, Chalice of the Void can be a little trickier. But if you find a way to move counters around, this can be a goldmine.

Of course, this does include your spells, too. But if you play it right, the majority of your spells will still go through because they won’t be the same cost as the number of charge counters. 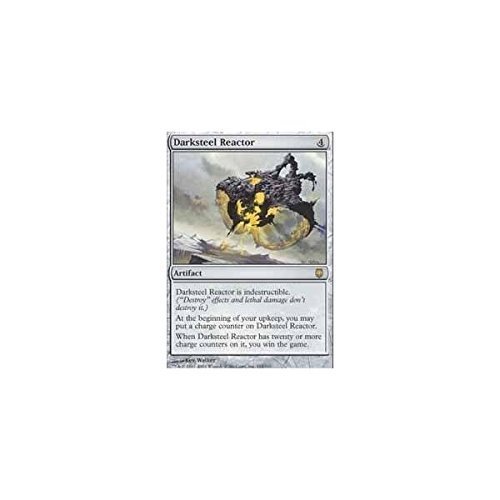 With Darksteel Reactor, all you need is 20 charge counters and you win the game. One charge counter occurs automatically at the beginning of your upkeep.

And with cards that have Proliferate, you can speed up the process to your victory. On top of all that, Darksteel Reactor is indestructible, so your enemies will have a hard time getting rid of it.

It’s basically a ticking time bomb. If your opponents can’t come up with an answer quickly, then you win. 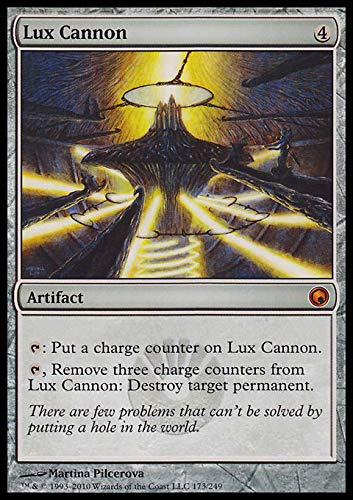 The beauty of Lux Cannon is that, like Darksteel Reactor, its effects are completely free for you. Simply cast it and tap it at no cost to add a charge counter to it.

Once you have three charge counters, you can tap Lux Cannon again to destroy a target permanent. It’s basically like having a free and permanent destroy spell at your disposal.

Additionally, if waiting three turns to get three charge counters is too slow, you can use abilities like Proliferate to speed things up. Alternatively, you could use cards that untap your permanents to untap Lux Cannon and tap it again in one turn. 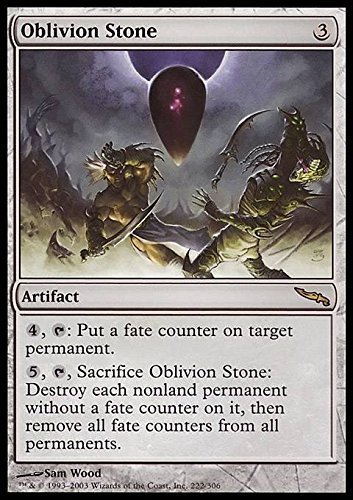 The function of Oblivion Stone is deceptively simple. At a glance, it can look like something you use to preserve your permanents with by putting fate counters on them.

However, generally speaking, it’s used as a board wipe as soon as possible. It’s cast, and then the five mana to sacrifice it is paid so that all nonland permanents without fate counters are destroyed.

The reason that’s useful is that Oblivion Stone is colorless. It can be used in any color deck, including green decks that have few options when it comes to mass destruction.

If you’re playing against more than one person, and all their battlefields look better than yours, you can use Oblivion Stone to destroy them all. 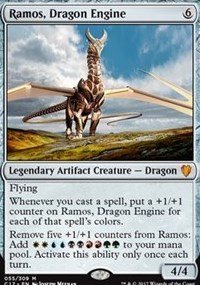 As a legendary artifact creature, Ramos, Dragon Engine has the option of also being used as a viable Commander.

What you’ll want to do with it is cast as many multi-color spells as possible. For each color used in a spell, Ramos, Dragon Engine will get another +1/+1, making it a pretty frightening creature to attack with.

But that’s far from all – once you have five counters on it, you can remove them to add two mana of every color to your pool. That’s ten mana, which is enough to afford a ton of expensive spells. 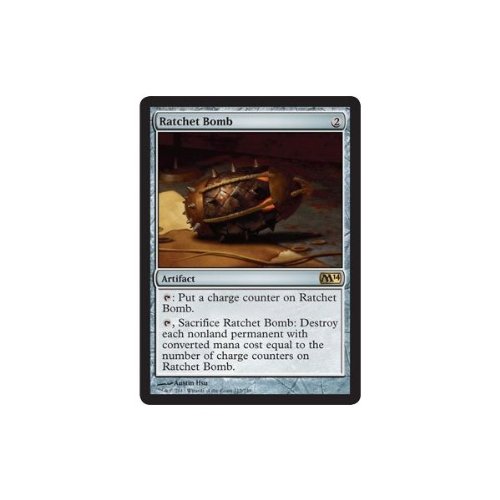 When you find your opponents’ advantage far outweighing yours, Ratchet Bomb is one way to catch up.

One way to use this is to get enough counters on it to equal the cost of the greatest threat on the battlefield and sacrifice Ratchet Bomb to dispose of it. Another way is to figure out what the average mana cost is of all your opponents’ permanents, and get that number of charger counters on Ratchet Bomb first. 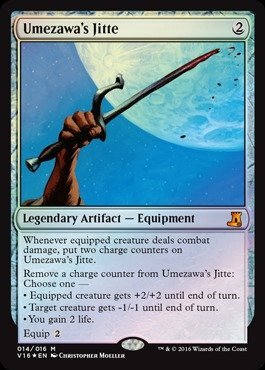 When you look at Umezawa’s Jitte, it may not seem as strong as some of the other cards on this list. But on closer inspection, you can see just how flexible it is, and that’s where its strength lies.

Umezawa’s Jitte is a weapon that is equipped to a creature. When that creature deals combat damage, whether it’s to a player or another creature, you add two counters to Umezawa’s Jitte.

For the cost of one of these counters, you can give the creature holding it a +2/+2 temporarily, give a creature -1/-1 temporarily, or gain 2 life. Whether you need it to be offensive or defensive, Umezawa’s Jitte can help turn the tables for you. 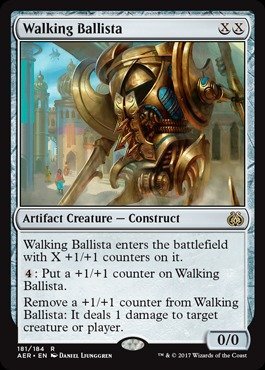 Need to eliminate a threat from one of the other players? Walking Ballista is a good option.

It enters the battlefield with a number of +1/+1 counters on it equal to however much mana you choose to pay into it. Then, for an additional four mana, you can add another counter.

When it has as many as you need, you can remove counters from Walking Ballista to do damage to a creature or player. With enough counters, you could use this to outright destroy one of your opponents.

All of these cards are noteworthy artifacts that use counters in some way. If we had to pick a favorite, we’d recommend

Getting to automatically counter spells is incredibly powerful. It saves you the hassle of having to block your opponents from casting from their arsenal.

The flexibility of Umezawa's Jitte is also amazingly useful, too, though. Depending on what you need most, be it offense or defense, it can help you put pressure on opponents or catch up to them.