When you’re playing MTG, it can get intense watching other players take their turns.

Sometimes, the only way to protect yourself is to be able to immediately respond to a spell they cast. If you have a type of spell called an instant in your hand, you can use it at any time.

However, if you don’t have any instants, then another option is to cast something with flash. Artifacts can potentially have this ability, and because they’re usually colorless, they’re easy to include in any deck.

We’ll show you MTG artifacts with flash. These are the topics we’ll be covering:

Use These Links to Navigate this Guide >>
What is Flash?
MTG Artifacts with Flash
Wrap Up

Generally speaking, the only type of card that can be played at any time, even when it’s not your turn, is an instant.

The reason you would want to cast spells at any time is simple: sometimes you need to respond to a threat the moment it happens.

For example, someone may have casted a spell that destroys all your permanents. If you don’t have an answer to that spell immediately, you lose the board advantage you may have built up.

But what if you don’t have any instants in your hand? Then one alternative is to cast a spell with the ability flash.

Flash, for all intents and purposes, just makes a spell function like an instant. You can cast a spell with flash at any time.

An example is Ambush Viper. Perhaps the best way to use Ambush Viper is to wait until an opponent attacks you with a big creature you want gone, then cast Ambush Viper to block.

Your opponent won’t be expecting it, since it won’t be on the battlefield already and it won’t be your turn if they’re attacking. And since Ambush Viper has deathtouch, your opponent’s creature will be destroyed.

There are a number of artifacts with flash in the game, and potential uses for them.

Some of the ones on this list don’t specifically say “flash.” However, they have text that amounts to the same effect by saying you can play them at the same time you’d play an instant.

The reason some of them don’t say flash is that they were printed before the keyword flash was created.

In the future, it’s possible that more could be added, but at this point in time, the list of artifacts with flash is as follows: 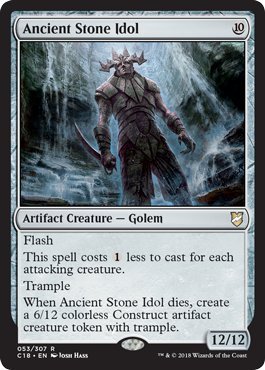 By itself, it’s a bulky artifact creature with 12/12 power and toughness. The fact that you can cast it at any time with flash is terrifying – and the threat doesn’t end when dies. 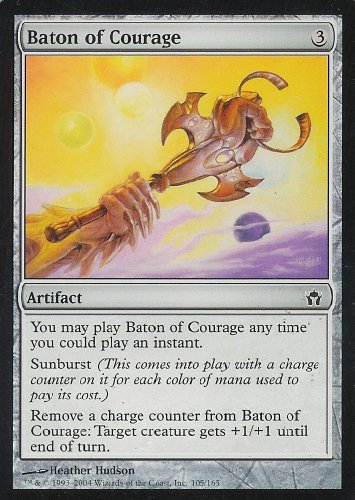 This is one of a few cards on the list that doesn’t explicitly say “flash,” but the text on the card essentially grants you that ability. It says you can play it at any time you could an instant.

Baton of Courage is best used in multi-color decks where you can cast it with as many colors of mana as possible. The more colors you use to cast it, the more +1/+1 counters it gets that you can move to your creatures temporarily. 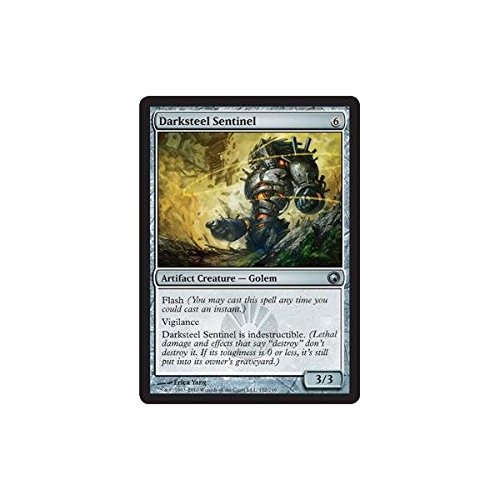 Perhaps one of the best ways to use Darksteel Sentinel is as an unexpected blocker. Because it has indestructible, it’s immune to combat damage or any cards that destroy permanents.

It could also be used as an attacker. With a power and toughness of 3, it’s a moderately sized creature, and it has vigilance, so it can attack without being tapped. 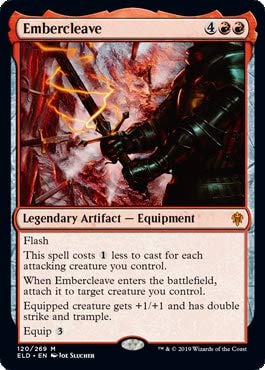 Depending on how late in the game it is when you use it, Embercleave could potentially win you the game. 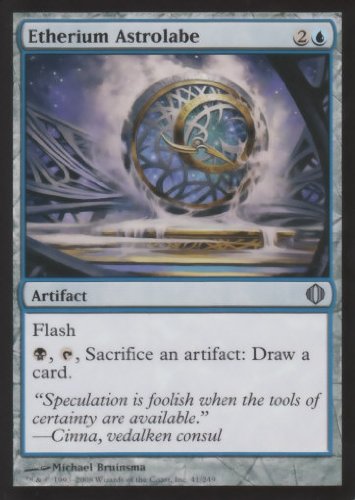 Card draw is always a strong advantage. If you’re backed into a corner, being able to draw another card means you might get the answer you need to save yourself.

Etherium Astrolabe gives you that card draw. You’ll have to sacrifice an artifact for it, but that effect may be worth it for you. 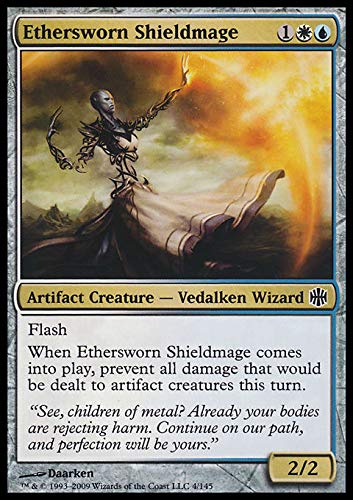 You can think of Ethersworn Shieldmage as a last resort to saving any artifact creatures you have. If your deck is artifact-heavy, then it could be a real boon to you.

When you flash Ethersworn Shieldmage out, it protects all artifact creatures from damage for one turn. 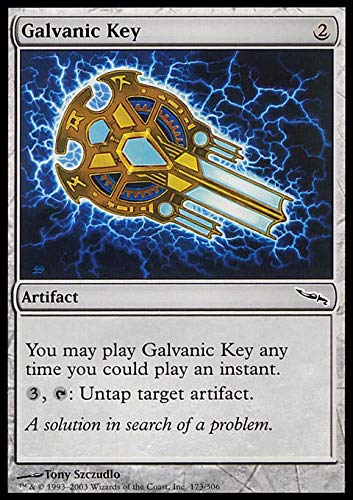 If your deck focuses on artifacts, Galvanic Key may be a welcome addition. Many artifacts have to be tapped in order to perform a specific ability, or artifact creatures are tapped when they attack.

You can cast Galvanic Key when your opponents least expect it to untap a specific artifact and use it again. 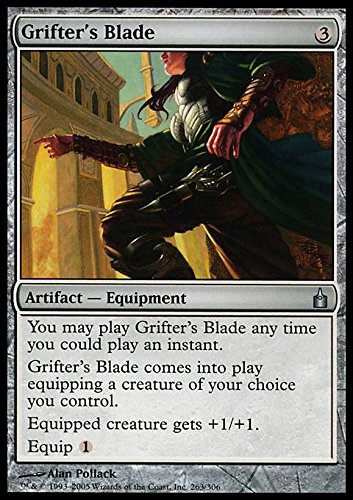 The effect of Grifter’s Blade is small, but it could make a difference. You can flash it out and equip it to a creature for a modest +1/+1 boost.

If your creature is about to be destroyed by something a little bigger, this could save it. Otherwise, if you need that 1 extra to destroy a creature, Grifter’s Blade could help you achieve it. 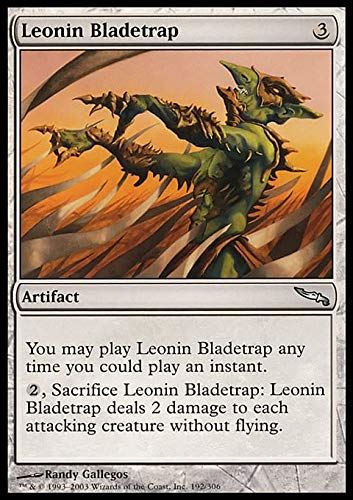 Depending on the size of your opponents’ creatures, Leonin Bladetrap could function as a sort of board wipe. You can play it and immediately sacrifice it to do 2 damage to each non-flying creature attacking you. 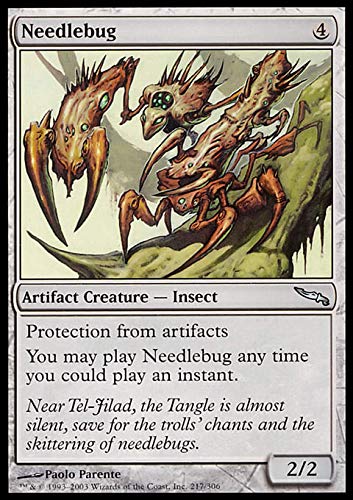 In the Mirrodin block, when Needlebug was printed, protection from artifacts was huge. That’s because Mirrodin was an artifact-dominated block, and decks with artifact themes were rampant. 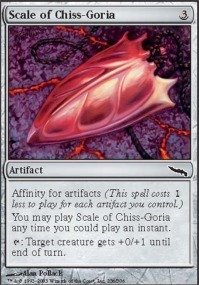 With Scale of Chiss-Goria, you can provide a +1 bump to any creature’s toughness for one turn. The benefit to this is boosting a creature you’re using to block or even attack.

With +1 to its toughness, it’s more likely to survive an attack or block. 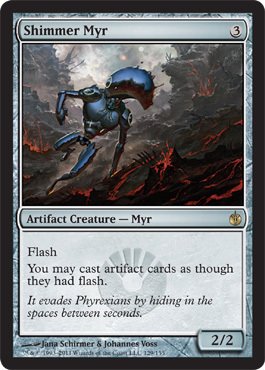 This is an especially interesting one. On top of having flash, Shimmer Myr also gives all you the ability to cast all your other artifact cards as if they have flash.

The effect lasts as long as you have Shimmer Myr out, so you’ll need to protect it. But being able to cast every single artifact at any time could be tremendously helpful. 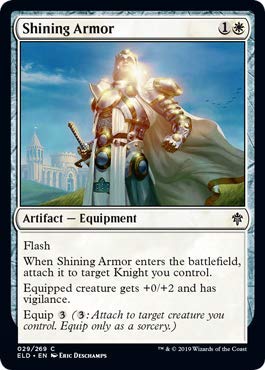 Since it’s designed to attach to knights, Shining Armor is most useful in specific kinds of decks. It gives the knight it’s attached to +2 to its toughness, as well as vigilance.

If you’re running a deck with a lot of knights in it, this is the one for you. 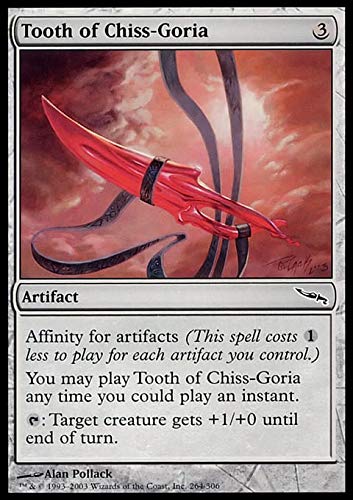 With its affinity, Tooth of Chiss-Goria could potentially cost you nothing to cast if you already have a lot of artifacts out. What it will do once it’s out is give one of your creatures a +1 buff to its power.

If you have at least three artifacts on the battlefield already, you’ll basically be getting a free +1/+0 boost. 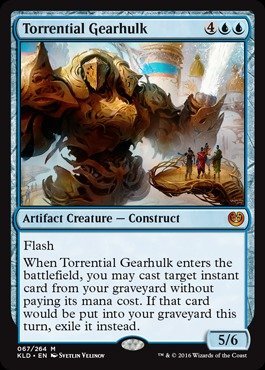 You’re getting a kind two-for-one deal when you cast Torrential Gearhulk. When you cast it, you can also cast an instant from you graveyard for free.

It’s sort of like getting a temporary flashback. If you’re want to learn more about flashback, you can read about it in our guide here. 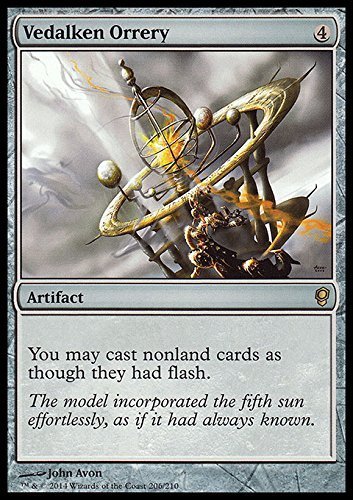 But it does give all other nonland permanents flash while it’s out – it’s not limited to just an instant in your graveyard.

Depending on the kind of deck you have built, Vedalken Orrery is definitely one of the most useful flash artifacts on this list.

While it doesn’t have flash for itself, its ability to give all your other cards flash could turn the tide in your favor. You’ll want to keep your mana open if you’re using this card, though, to ensure that you can cast necessary spells at any time.