Home » MTG » MTG Artifacts with Flashback (Do They Even Exist?) 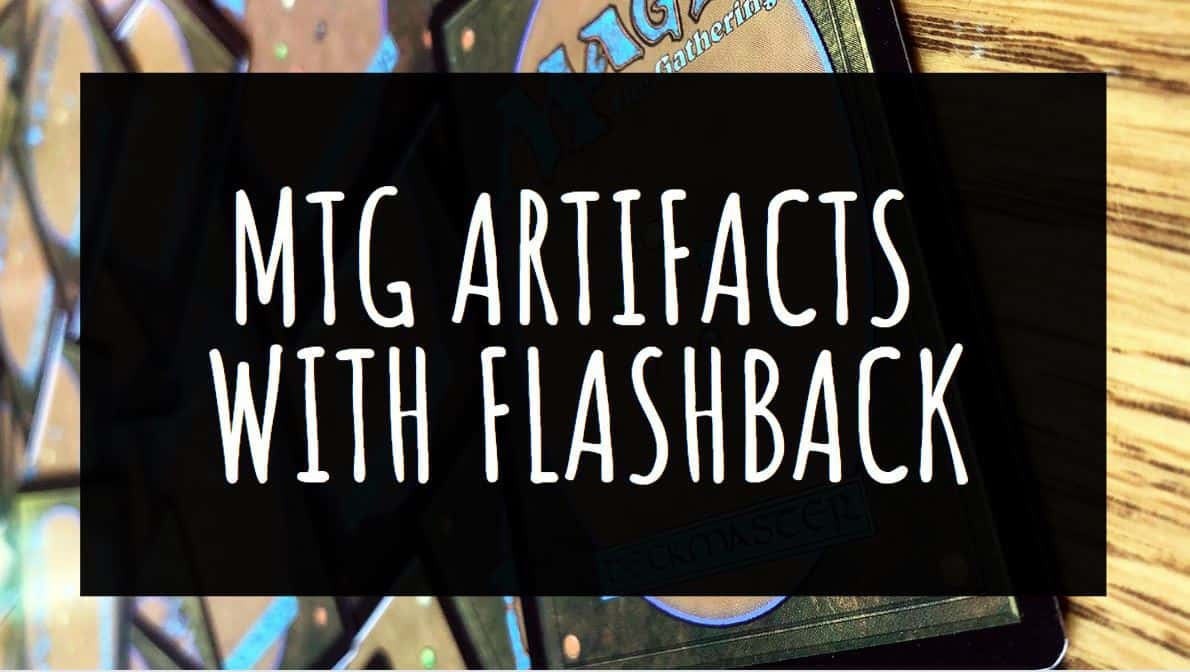 A lot of the time, when you cast an instant or sorcery in MTG, it’s basically gone after its effects. It goes to the graveyard, where it usually remains.

If one of those instants or sorceries is needed down the road in the game, you might find yourself wishing you could cast it again. With flashback, that’s actually possible.

And depending on the color of your deck, it can be easiest to add artifacts. Since they’re usually colorless, they can fit in just about anywhere.

We’ll explain all that and more here. This is what we’ll go over:

Use These Links to Navigate this Guide >>
What is Flashback?
MTG Artifacts with Flashback
Wrap Up

The word “graveyard,” which is where the majority of your permanents go after destruction or use, implies permanence. If you were a beginner, you could be forgiven for thinking that cards in the graveyard are simply stuck there for the rest of the game.

You might be surprised to learn that this isn’t necessarily the case. Some decks are built in such a way that the graveyard is treated like a second library.

One way to achieve this kind of effect is with an ability called flashback. With it, players can pay a cost to cast the spell from the graveyard.

Once it’s cast from the graveyard, the spell is exiled, preventing you from casting it again that game. In short, flashback is basically getting a second chance to cast something.

This ability applies specifically to instants and sorceries, which are non-permanent spells. Non-permanent in this regard means that they don’t stay on the battlefield after being cast, like creatures or artifacts do.

Past in Flames, pictured above, is an example of a spell with Flashback. Interestingly, what it does is give all other instant and sorcery cards in your graveyard flashback temporarily.

Then, since it has flashback itself, you can give all other instants and sorceries flashback once again.

Since permanent cards don’t have flashback, the truth is there aren’t any artifacts that have it themselves.

However, there are artifacts that interact with flashback in some way. Those artifacts are Altar of the Lost and Catalyst Stone.

Tapping for two extra mana is incredibly useful. With Altar of the Lost, you’re able to add two mana to your mana pool in order to cast a spell with flashback from your graveyard.

It’s true that it’s a very specific and niche use, but it’s possible to build entire decks around flashback. If that’s your plan, Altar of the Lost could be crucial for you. 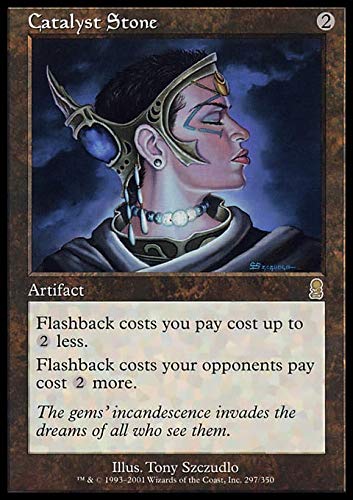 With Catalyst Stone, you’re getting two effects. On one hand, the cost you have to pay in mana for flashback is reduced by two.

On the other hand, your opponents will find that their flashback costs are increased by two. It’s a nice element of control that helps you gain the upper hand.

At this point in time, those are the only two artifact cards involved with flashback.

And they’re honestly best used together. If you’re going to build a deck centered on the flashback mechanic, these two will help you pay the flashback cost much more easily.

At the same time, Catalyst Stone will make it more difficult for your opponents to pay their own flashback costs. Of course, if your opponents aren’t using a deck with flashback in it, that’s not particularly useful to you.

There’s also so much more that artifacts can do.

If you want artifacts that can protect your permanents, try looking at our list of artifacts with hexproof here. Or, if you’re interested in aggressive artifacts with infect, we’ve got a list of those here.