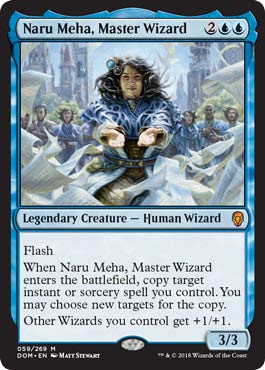 Naru Meha, Master Wizard is a 3/3 Human Wizard, and she sits on the top of our list of MTG’s best blue ETB creatures for several reasons.

Besides being a Legendary Creature, Naru is a mythic rare card and has Flash. That means you can play her anytime you could play an Instant or spell.

Even more, when Naru Meha, Master Wizard enters the battlefield, you may copy an Instant or Sorcery card you control and choose additional targets for them.

Oh yeah, she also grants all other Wizards on the board +1/+1 counters. 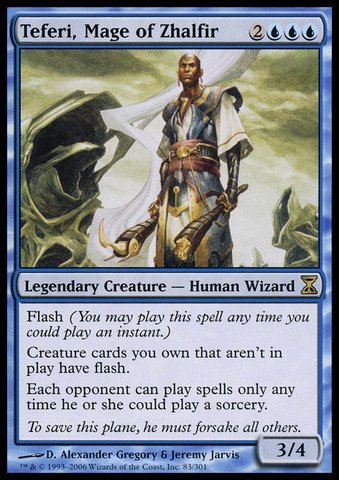 Another great card that belongs on the top of our list of the best blue ETB creatures in MTG is Teferi, Mage of Zhalfir.

A rare blue 3/4 Legendary Creature, Teferi is a Human Wizard with Flash. His casting cost is 2 colorless and 3 blue mana.

Creature cards in your hand become endowed with Flash once Teferi is on the board.

Further, Teferi limits your opponent’s ability to play Flash and Instant cards any other time than when they could play Sorcery cards. 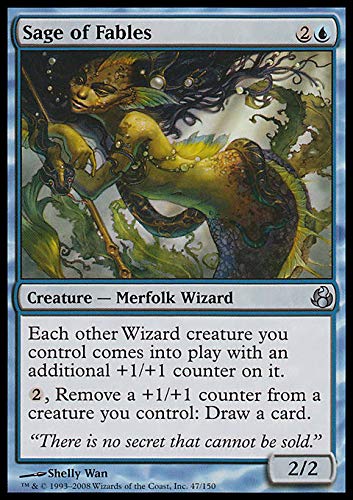 Sage of Fables is an uncommon blue 2/2 Merfolk Wizard with a casting cost of 2 colorless and 1 blue mana.

All of your Wizards on the battlefield gain +1/+1 counters when Sage of Fables comes into play.

Plus, pay 2 colorless mana anytime, remove a +1/+1 counter from a creature you control (it doesn’t have to be from Sage), and draw a card. 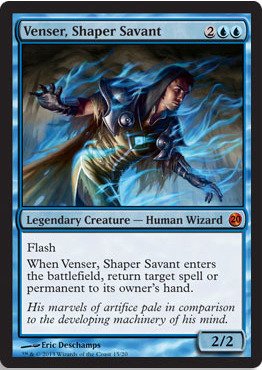 When this Human Wizard enters the battlefield, you may return a permanent card or target spell to its owner’s hand (be it yours, or your enemy’s). 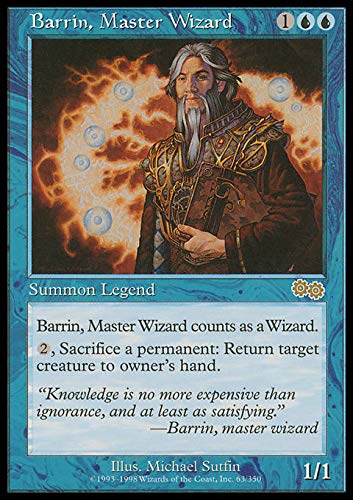 Barren, Master Wizard, is one of those cards that seems insignificant at first, due to being a 1/1 creature. But, this guy is no peon.

A rare blue Summon Legend card, Barrin, Master Wizard, counts as a Wizard and comes with the ability to sacrifice a permanent, pay 2 colorless mana, and return a creature to its owner’s hand.

Said creature may belong to anyone in the game, including yourself. 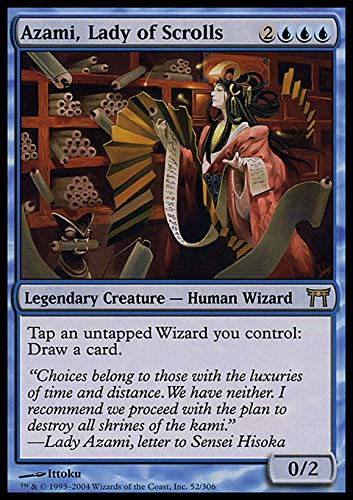 Azami, Lady of Scrolls is another rare blue card that seems a bit unlikely for this list. But, her she is (for a good reason!).

A 0/2 Legendary Creature Human Wizard, this Lady has a casting cost of 2 colorless and 3 blue mana.

As long as Azami, Lady of Scrolls is on the battlefield, you may tap an untapped Wizard you control and draw a card from the top of your deck.

See? She deserves her spot on our list of the best blue ETB creatures in MTG (as she helps you get more cards into your hand). 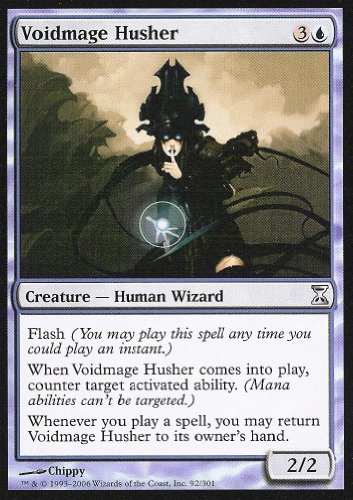 Voidmage Husher is a 2/2 Human Wizard creature with a cost of 3 colorless and a single blue mana to cast onto the battlefield.

The Voidmage Husher card has Flash,  so you can play it practically any time, even when it’s not your turn.

When Voidmage Husher comes into play, you may counter a target ability (but not mana activated ones).

Even better, whenever you play a spell, with this card on the board, you may return it to your hand, if you wish. 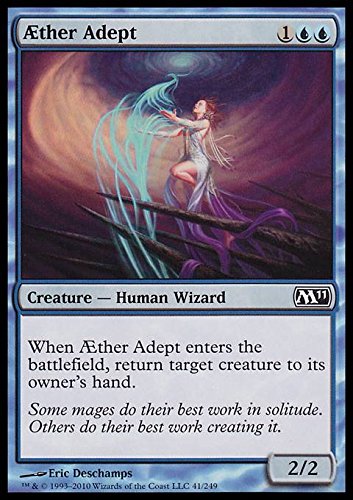 A simple but effective blue ETB creature is this 2/2 Human Wizard, Aether Adept.

With an affordable casting cost of 1 colorless and 2 blue mana, she’s relatively easy to get out onto the battlefield.

When she enters the battlefield, Aether Adept allows you to return any creature to its owner’s hand (even one of yours if you so choose).

9. Captain of the Mists 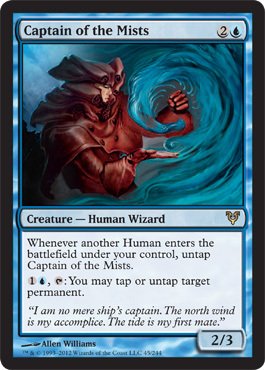 The last rare blue card on our list of MTG’s best blue ETB creatures is none other than Captain of the Mists. It is a 2/3 Human Wizard with a cost of 2 colorless and 1 blue mana to cast.

Whenever you play another Human creature, you may untap Captain of the Mists.

Additionally, if you pay 1 colorless and 1 blue mana, and tap Captain of the Mists, you may tap or untap any target permanent in the game.

That means you can really mess with your enemies, or you can help yourself out on the mana end of things by untapping a land you already used to add mana to your pool this turn. 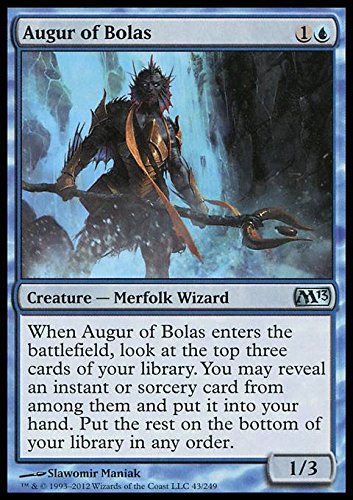 An uncommon Merfolk Wizard with a power of 1 and a toughness of 3, Augur of Bolas is the last of our recommendations for your blue ETB creatures deck.

When this guy enters the field? You get to look at the top three cards in your deck. And, if they are Instants or Sorcery cards, you may put them into your hand.

If the cards are of another type, you much put them into the bottom of your deck instead.

What Are ETB Creatures In MTG?

ETB creatures are creature cards that include abilities that are activated upon them entering the battlefield (hence, ETB).

How Many Blue ETB Creatures Should I Put In My Deck?

If you’re playing with a blue deck, you’re likely to have 15 or 20 creatures in it as the rest of the cards will be mana sources, Instants, Sorceries, Enchantments, and Artifacts. Out of the creatures you do have in your blue deck, over half of them should have ETB abilities.