Blue creatures aren’t just hard for your opponents to reach, they can be downright tricky to deal with altogether. Read on below and find out why these are the top 10 MTG best blue flying creatures! 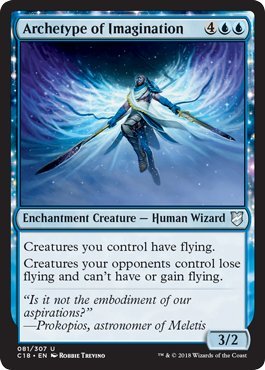 The top card on our list of MTG best blue flying creatures is the Human Wizard Enchantment Creature, Archetype of Imagination.

A 3/2 creature, it is an uncommon card with a mana cost of 4 colorless and 2 blue (and very much worth it!).

When Archetype of Imagination comes out onto the battlefield, creatures you control gain flying.

But, wait. There’s more: your enemy’s creatures lose flying abilities and can’t gain them back! 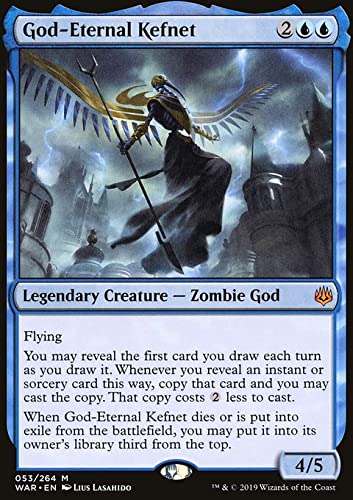 God-Eternal Kefnet is the second creature card on our list of the top 10 best blue flying creatures in MTG. This one is a mythic rare with some awesome abilities.

A 4/5 Legendary Creature Zombie God, the God-Eternal Kefnet card costs 2 colorless and 2 blue mana to cast. If you ask us, that’s nothing compared to what you gain.

Besides being a flyer, you may reveal the top card of your deck when you are drawing the first card on your turn. If it is an Instant or Sorcery, with a cost of less than 2,  you may make a copy and play it for free.

Perhaps the best part? When this Zombie God should die, or become exiled by an opponent, you get to put him back into your deck instead (three cards from the top). 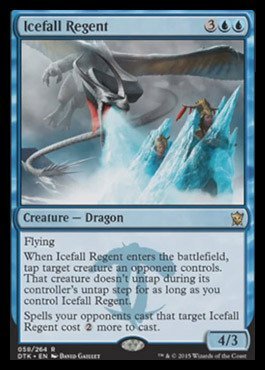 Icefall Regent is a rare blue flyer with 4 power and 3 toughness. It comes with a casting cost of 3 colorless and 2 blue mana.

Even more, if your enemy cast spells targeting this rare blue Dragon creature card, they must pay an additional 2 mana or the spell can’t be completed.

4. Sphinx of the Final Word 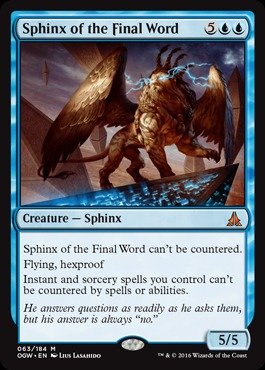 Sphinx of the Final World is a beastly mythic rare blue flyer with a power of 5 and a toughness of 5.

The card has a cost of 5 colorless and 2 blue mana to bring out onto the battlefield, which is semi-expensive but more than worth the price.

When this big guy enters the field he can’t be countered. Further, he is hexproof.

Further, Instants and sorceries that you play can’t be countered by spells or abilities as long as he is alive. 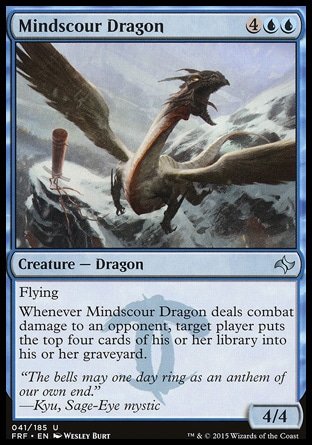 An uncommon blue flyer, Mindscour Dragon is a 4/4 creature with a mana cost of 4 colorless and 2 blue.

Aside from being a flying creature, whenever this Dragon deals combat damage to an enemy, that player must mill the top four cards of his or her deck.

That means, whenever you successfully attack with this card, your enemy has to throw away four cards into their graveyard.

Several successful attacks with this blue Dragon will serve your opponents a crushing defeat. 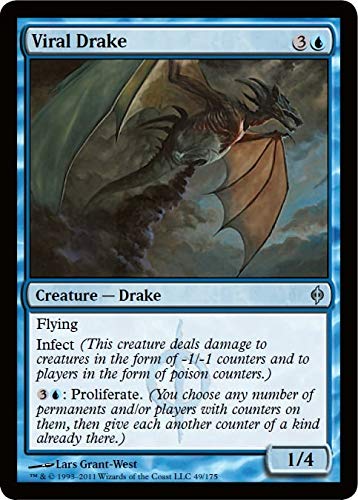 The Viral Drak is a classic blue flyer that more than deserves some recognition on any list of MTG best blue flying creatures.

It may not be the strongest, but it is an excellent blocker and has some really great abilities as well.

An uncommon Drake creature card, Viral Drake has 1 power and 4 toughness as well as Infect and Proliferate.

That means that you can deal damage in the form of -1/-1 poison counters rather than combat damage.

Also, you may multiple counters on target cards by paying 3 colorless and 1 blue mana. 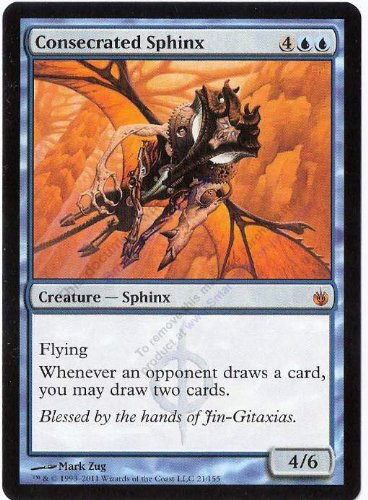 Number seven on our list of the top 10 MTG best blue flying creatures is the Sphinx creature, Consecrated Sphinx.

A mythic rare, with 4 power and 6 toughness, the Consecrated Sphinx costs 4 colorless mana and 2 islands to cast onto the field.

In addition to being a big and strong flying creature of the blue school, Consecrated Sphinx also allows you to draw 2 cards for every 1 card an enemy draws. 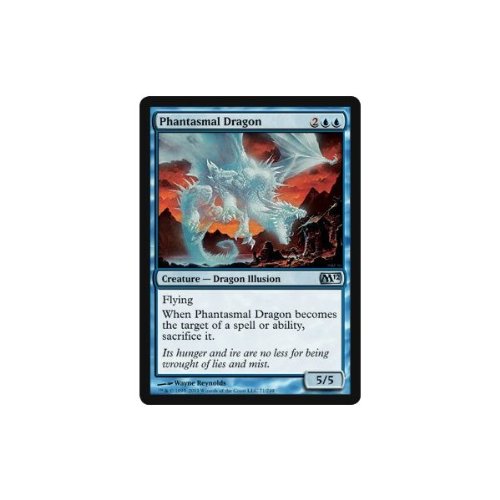 The Phantasmal Dragon is a 5/5 Dragon Illusion creature of the uncommon class. It has a casting cost of 2 colorless and 2 blue mana.

A flying creature with lots of power and toughness, it’s an excellent card to swoops past grounded creatures controlled by enemies and deal vicious blows to enemy players.

The downside to this card? When the Dragon Illusion becomes the target of an ability or spell of a creature, it must be sacrificed. 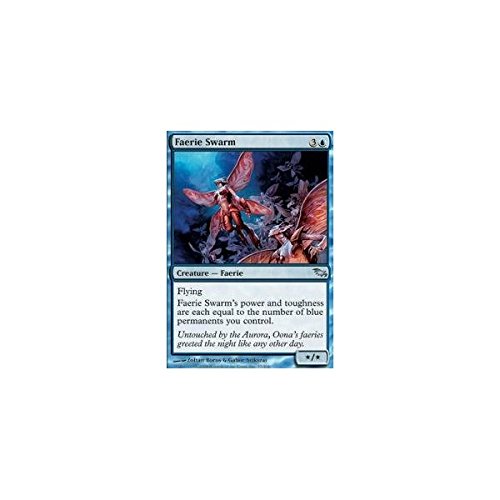 The next to last card on our MTG best blue flying creatures list is a real doozy.

Faerie Swarm is an uncommon Faerie with the potential of becoming a rare or even mythic creature in future additions of MTG.

With a casting cost of 3 colorless and 1 blue mana, it is a bargain.

This blue flyer’s power and toughness are equal to the number of blue permanents that you control.

With Faerie Swarm, nobody on the other side of the battlefield is safe from you! 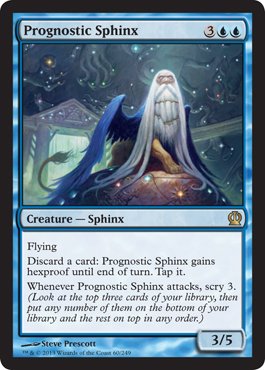 Prognostic Sphinx is an interesting one. A rare Sphinx Creature of the blue school, it has 3 power and 5 toughness.

It is an excellent attacker and an even better blocker.

That said, in addition to flying, the card has the ability to become hexproof until the end of the turn. All you have to do is draw a card, and tap it. This ability is mainly to save the card from being destroyed.

The best part? This wise old Sphinx allows you the Scry 3 ability. That means you get to sneak peek the next three cards in your deck each turn and rearrange them as you wish (including putting them on the bottom).

Blue flyers are amongst the trickiest flying creatures there are in MTG. Compared to flyers of any other color, blue flyers have the best magical abilities. Blue flyers often come with Scry, Proliferate, Counterspell, Hexproof, and other perks. This makes them hard to contend with without burning through all of your sorceries and instants.

How Do You Win At MTG With A Blue Flyer Deck?

Blue flying decks are a bit underhanded in their tactical advantage. For the most part, all you need to do is get them out on the battlefield, keep them there, and use the crap out of their abilities. Return cards from graveyards, counterspells, fly over your enemy’s ground-based creatures, and generally wreak havoc until it’s “GG”.