Cheating creatures into play is a lot like smuggling goodies into the movie theatre. It’s tricky, isn’t free by any means, and is more than worth the trouble. Read on to find out which creatures are the best to cheat into play during your next MTG games.

1. Bringer of the White Dawn 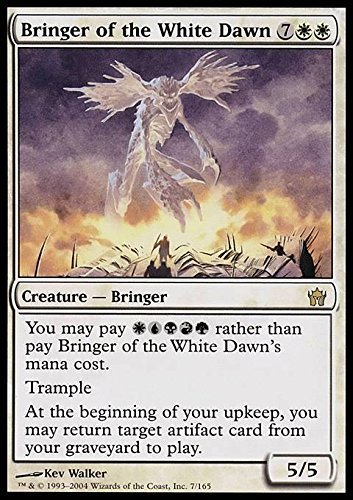 The Bringer of the White Dawn is a very special rare 5/5 white Bringer creature with Trample. Rather than paying its regular casting cost of 7 converted mana and 2 plains, cheat this Bringer into play by paying single mana of very color cost.

At the beginning of each upkeep, you may return a target artifact card from your graveyard to play.

The more Bringers you have in your hand, the more types of cards you are able to bring back into play from the graveyard each turn, or other abilities you may activate.

That’s why we’ve reserved the top 5 spaces in our list of MTG’s best creatures to cheat into play for the five main Bringers.

2. Bringer of the Green Dawn 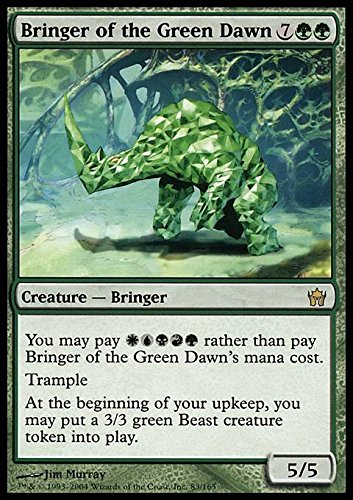 The Bringer of the Green Dawn is an identical twin of its brothers, making it a rare 5/5 Bringer Creature with Trample that you can bring into play for one mana of each color, or by paying 7 converted and 2 green mana.

At the beginning of your upkeep, you get to put a brand spanking new 3/3 green Beast creature token into play on the battlefield.

Combined with his brothers, the Bringer of the Green Dawn is no card to underestimate.

3. Bringer of the Red Dawn 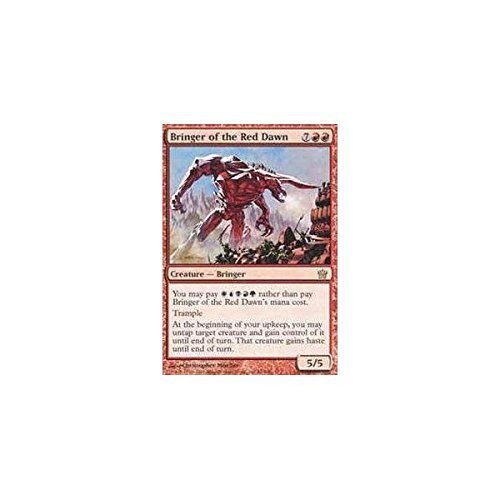 The third rare Bringer Creature on our list of the best creatures to cheat into play is the Bringer of the Red Dawn, another 5/5 with Trample that is castable for 1 of each mana color (or its original price of 7 converted and 2 red mana).

The Bringer of the Red Dawn’s ability is a little different than the other Bringers. You get to choose a target creature, that anyone controls, and control it until the end of your turn. Said creature is untapped and has haste as well.

4. Bringer of the Blue Dawn 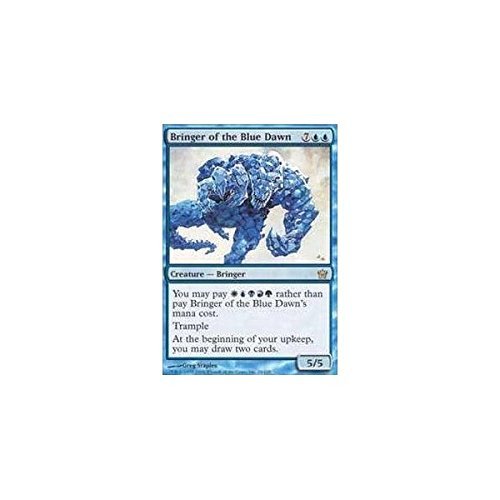 The second to last of the rare 5/5 Bringer’s with Trample is the Bringer of the Blue Dawn. Like its family, it is castable for 7 converted mana and 2 islands, or 1 of each mana color.

The blue Bringer allows you to draw two cards from the top of your deck each time it’s your upkeep step.

Needless to say, this ability, in combination with the other Bringers is pure madness.

5. Bringer of the Black Dawn 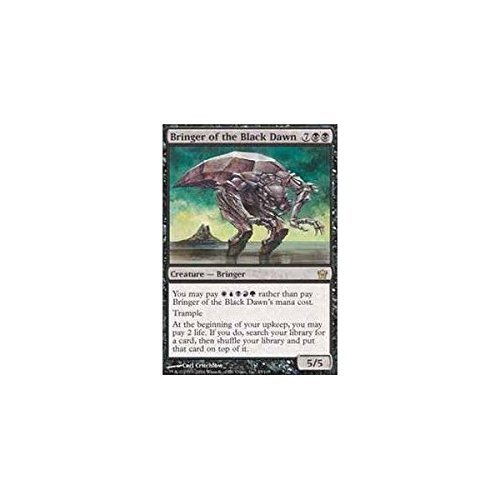 Last, but far from least of the Bringers, is the Bringer of the Black Dawn. It is a rare 5/5 Bringer Creature with Trample, and a casting rate of either 1 of each color, or 7 converted and 2 swamps.

At the beginning of each upkeep that Bringer of the Black Dawn is on the battlefield, you may pay 2 life and search your deck for a card, shuffle, and place the card on top of the deck.

This card’s ability, especially in tandem with the blue Bringer’s ability, helps you stay well-prepared and ahead of the game. 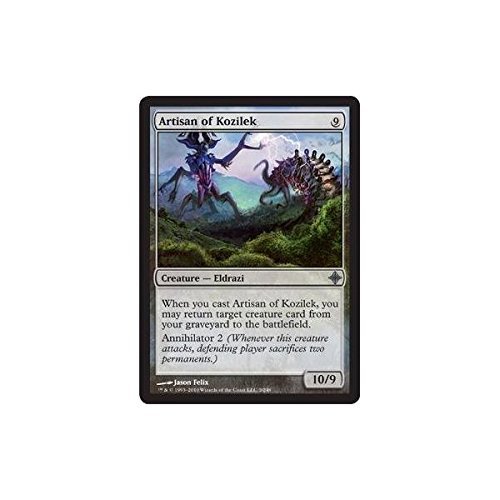 The artisan of Kozilek is one of the “biggest” creatures to cheat into play in MTG. A humongous 10/9 Eldrazi creature, it isn’t exactly the easiest to sneak into play without the help of a spell or ability, but once it’s there it helps set you up for cheating in scores of creatures.

Plus, when you cast it, you get to return a creature of your choice onto the battlefield from a graveyard. Another great feature of this card is that it has Annihilator 2. That means whenever it attacks, the player defending has to sacrifice two of their permanents. 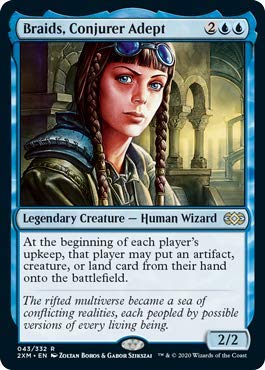 At first glance, you may not think much of this braided maiden, but on second glance it all starts sinking in.

Once into play on the battlefield, everyone in the game gets to put a land, artifact, or creature card onto the battlefield (from their hand) during the beginning of each player’s upkeep step.

Aside from setting things up that you can sneak a creature onto the field each time it’s your upkeep turn, you also have a 2/2 creature at a mid-range casting cost, with this Legendary Human Wizard, Braided, Conjurer, Adept. 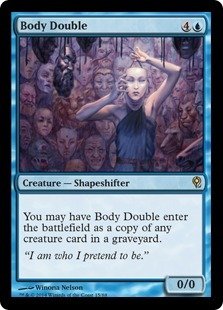 Body Double isn’t exactly free to play, coming with a convereted mana cost of 4 colorless and 1 island. But, it does enable you to “cheat” your own copy of any creature in any graveyard onto the battlefield.

As long as this Shapeshifter is in play, it remains the copy of the creature you target when you cast it.

Pretty wicked, eh? It’s indeed a great way to cheat in one of your opponent’s best creatures, or one from your own graveyard for that matter. 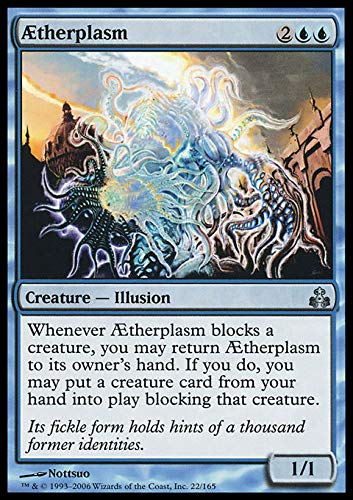 One of the most popular creatures to “cheat” into play is the Creature Illusion Aetherplasm. It is a 1/1 blue Illusion Creature with a casting cost of 2 converted and 2 blue mana.

When this 1/1 Illusion is blocked on the battlefield, you may return it to your hand. If you do, replace it with a creature card in play and blocking the same creature.

So, you may need to pay for it to come out, but it allows you to cheat other creatures into play numerous times. 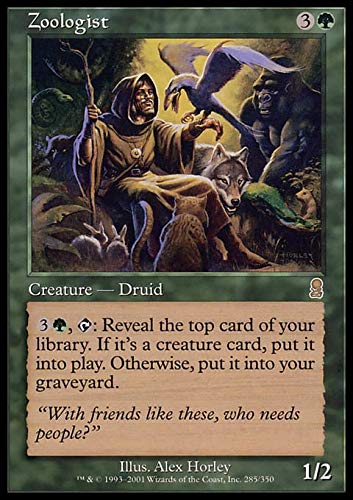 No list of MTG’s best creatures to cheat into play could be complete without at least a mention of the Zoologist. This Druid Creature is a 1/2 with a casting cost of 3 colorless and 1 green mana.

What makes the Zoologist so cool to play for cheating creatures into play is its ability. You may tap some mana, tap the card, and reveal the top card of your deck.

If it is a creature? It goes into play for free.

The downside is that if it isn’t a creature card it goes straight to the graveyard.

Common Questions About Creatures to Cheat Into Play

What Does it Mean to Cheat a Creature into Play?

“Cheating” a creature into play generally refers to getting a creature onto the battlefield without paying its normal mana price. However, it may also refer to certain incidents like Reanimation abilities that allow you to get creatures into play without its normal casting cost.

How Many Creatures Can You Cheat into Play at One Time?

How Hard is it to Cheat Creatures into Play in MTG?

Cheating creatures into play in MTG isn’t as “hard” as it seems. In order to get those tricky creature cards put into play, the right set of circumstances need to occur, and you must be ready and waiting to take advantage of the opportunity. So, it isn’t hard, but it does take a certain level of forethought and awareness during gameplay.