Mutating creature cards in MTG give you unexpected advantages against the enemy. Continue reading below for all the juicy details on our 10 favorite picks for MTG’s best creatures to mutate! 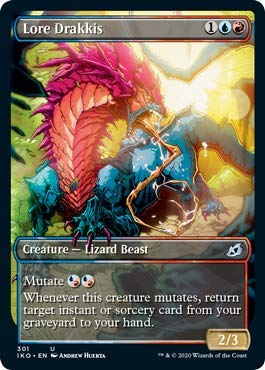 Lore Drakkis is an uncommon 2/3 Lizard beast of blue and red color, with a casting cost of 1 colorless mana, 1 blue, and 1 red.

To Mutate the Lizard Beast, you must pay an additional 2 blue or red mana once this creature is on the field.

The best part about this Lizard? Whenever it mutates, return a sorcery or instant card to your hand from your graveyard.

It might seem like a small ability, but it is HUGE. Think about it. You’ll be able to bring back any instant or sorcery card turn after turn.

In our book, that makes Lore Drakkis one of MTG’s very best creatures to Mutate, period. 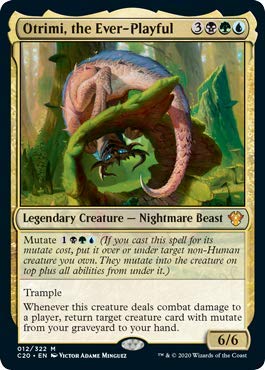 This Legendary Nightmare Beast costs 3 colorless, 1 black, 1 green, and 1 blue mana to cast. When it hits the field, it has Trample.

The Mutation cost for Otrimi is 1 colorless, 1 black, 1 green, and 1 blue mana.

This card is number two on our list because of its ability to return a creature card with Mutate from your graveyard every time it deals damage to a player. 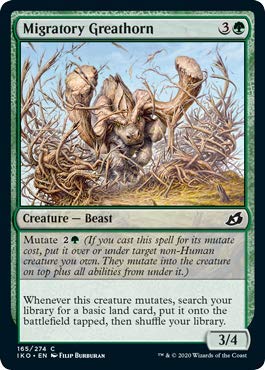 The Migratory Greenhorn is a 3/4 green Creature Beast with a casting cost of 3 colorless and 1 forest.

It also has a Mutate cost of 2 colorless and 1 forest.

Whenever Migratory Greenhorn Mutates, you get to search your deck for a basic land card and put it onto the battlefield tapped.

Afterward, you’ll need to shuffle your cards, but hey, that’s a small price to pay and may even help you get to better cards sooner! 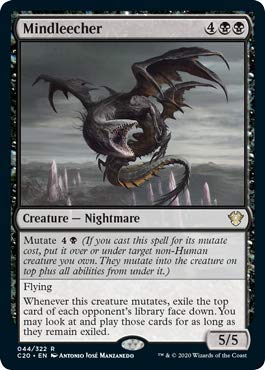 Mindleecher is a 5/5 rare black Nightmare Creature with flying. The spooky cards cost to cast is a bit steep, at 4 colorless and 2 black mana.

The Mindleecher’s Mutate cost is also a bit expensive, at 4 colorless and 1 swamp. That said, its Mutate ability is really exceptional.

When you Mutate this card as a spell, you get to choose a creature to set the card under. It becomes the card on top, plus gains all the abilities of the Mindleecher.

Also, even more impressive, whenever the creature Mutates, you get to exile 1 card from the top of everyone’s deck. You and only you may look at these cards and play them as long as they are exiled. 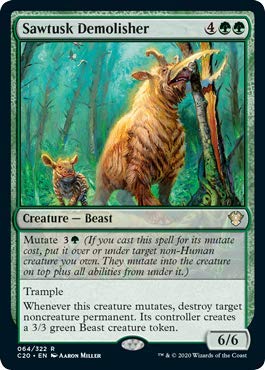 The Sawtusk Demolisher is another heavy hitter from the green team, and definitely deserves a spot on the list of MTG’s best creatures to Mutate.

A 6/6 Beast with Trample, and a casting cost of 4 colorless and 2 green mana, this big buy genuinely lives up to the creature class “Beast”.

If you play the card as a spell, you get to place it under a creature, and that creature gains all the abilities of the Sawtusk Demolisher.

If the card is in play as a creature, and Mutates, you may destory a noncreature permanent of your choice. 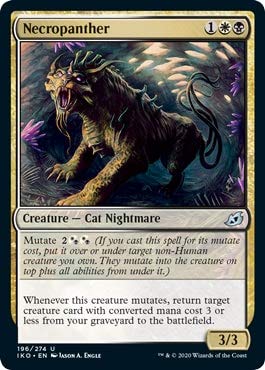 Besides having a really creepy name, this uncommon Cat Nightmare, Necropanther, has a really interesting Mutate ability.

To bring the Necropanther into play, it’ll cost you 1 colorless, 1 white, and 1 black mana.

Once on the battlefield, it is a 3/3 Cat Nightmare with the ability to return a creature card with 3 or less mana cost from the graveyard onto the battlefield (not tapped). 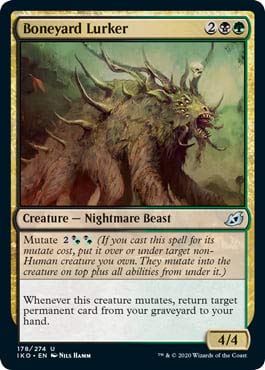 A 4/4 multi-colored (black and green) Nightmare Beast, the Boneyard Lurker is another uncommon creature on our list of MTG’s best creatures to mutate.

You may cast the card as a spell, and imbue a creature on the battlefield with the Boneyard Lurkers abilities.

Or, if you play it as a Nightmare Beast creature card, and decide to Mutate, you may return a target permanent to play from your graveyard.

The cost of Mutating this card is 2 colorless and 2 black or green mana. 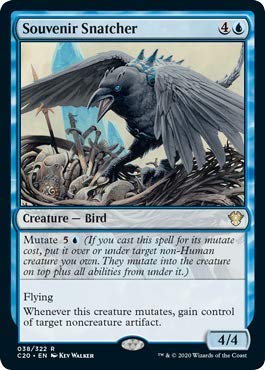 The only solid blue creature to appear on our list of the best creatures to Mutate in MTG is this 4/4 flyer, the Souvenir Snatcher.

Souvenir Snatcher has a mana cost of 4 colorless and 1 blue to cast it onto the battlefield.

A rare Bird, whenever Souvenir Snatcher Mutates, you gain control over a target artifact (so long as it isn’t a creature).

Also, you can alternatively play this card as a spell for 5 colorless and 1 blue mana. If you do so, you get to pick a creature on the battlefield and give it all of Souvenir Snatcher’s abilities. 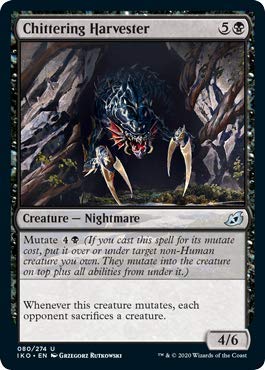 Chittering Harvester is a 4/6 uncommon black Nightmare creature card with a casting cost of 5 colorless and 1 black mana.

You may choose to Mutate the card as a spell for 4 colorless and 1 black mana, and grant its abilities to another creature you control.

Or, you can play the card as a creature. If you do, it has the ability to Mutate and cause each enemy to sacrifice one of their creatures. 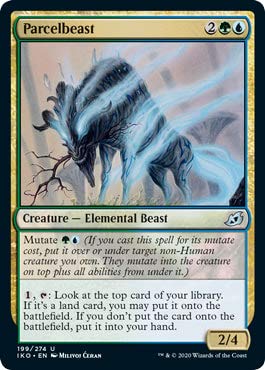 Last but far from the least is this uncommon 2/4 green and blue Elemental Beast creature with Mutate, Parcelbeast.

The Parcelbeast card costs 2 colorless, 1 forest, and 1 island to bring into play. Once on the battlefield, you may pay 1 colorless mana and tap it to search the top card of your deck for a land card.

Parcelbeast can also Mutate as a spell, for 1 forest and 1 island mana.

If you choose to do so, you may place it under a creature and grant said creature all of this Elemental Beast’s abilities.

What Does Mutate Mean in MTG?

Mutate in MTG is a type of activated ability. Each creature that may Mutate has a unique Mutate ability. Some Mutating creatures allow you to deal damage, exile cards, bring cards back to play from the graveyard, and making a variety of other interesting moves.

Are Creature Cards with Mutate Worth it?

Mutation cards are worth it if you enjoy surprising your enemy with versatile tactics they aren’t expecting. Oftentimes, enemies look at Mutating creatures like they’re loaded guns ready to explode in their faces. And, you’re the trigger man.

What is the Point of Mutating Creatures in MTG?

The point of Mutating creatures in MTG is multifaceted. It may be for dealing damage, healing, reviving spells or creatures, or other helpful abilities. Mutating creatures also annoy enemies and push them out of their comfort zones, never knowing what will happen next.