Sacrificing your own creatures may seem counter-productive, but that is far away from the truth. Read on and discover how sacrificing these 10 creatures will help up your MTG game for good! 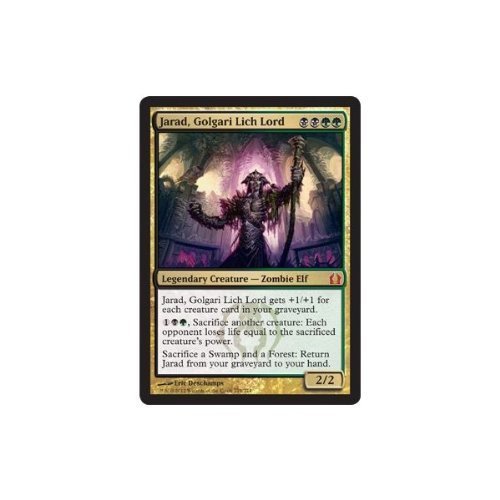 Jara, Golgair Lich Lord claims the top spot on our list of the MTG’s best creatures to sacrifice, and for good reason.

You can simply bring him back to life by sacrificing a swamp and a forest, at any time.

When you have this Legendary Zombie Elf on the battlefield, he gets a +1/+1 for every creature card in your graveyard.

But, even better, you can pay 1 colorless, 1 swamp, and 1 forest, plus sacrifice a creature and each enemy loses life points equal to the creature’s power that you sacrificed. 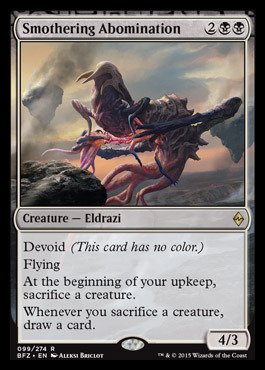 Smothering Abomination is a rare 4/3 Eldrazi creature with Devoid (it has no color association) and flying. At the beginning of your upkeep each turn, you must sacrifice a creature to keep the card on the field.

Also, whenever you sacrifice another creature, you get to draw a card.

At first glance, it may not seem worth it, but after you see this card in play with a reanimation or sacrifice deck, you’ll quickly understand the power of it!

The third card on our list of MTG’s best creatures to sacrifice is the Bloodsoaked Champion, a 2/1 Human Creature of rare status with a super-low casting cost of a single black mana.

What makes this creature so great to sacrifice is its Raid ability. For 1 colorless and 1 swamp, you may return this Human Warrior from the graveyard straight to the battlefield.

The catch is that you can only use the Raid ability if you used a creature to attack an opponent this turn. 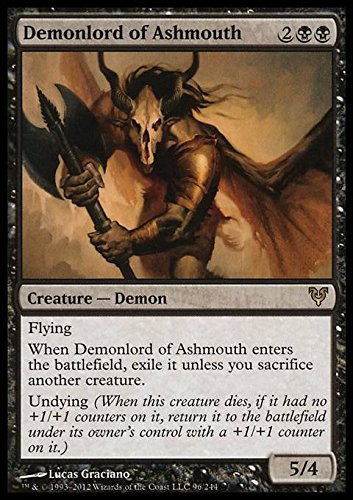 A rare flying black 5/4 Demon, the Demonlord of Ashmouth is yet another of MTG’s best creatures to sacrifice.

When the Demonlord of Ashmouth enters the battlefield you must exile it unless you sacrifice another creature that’s in play.

That awesome part is that when the Demonlord of Ashmouth hits the graveyard? You may revive it onto the battlefield with a +1/+1 counter on it, making it a 6/5.

That said, you can only bring the card back into play for free once. 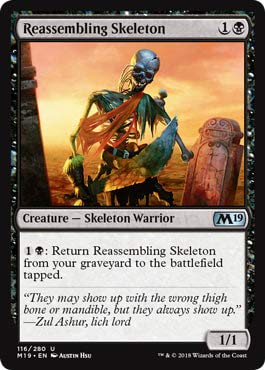 The Reassembling Skeleton is an uncommon 1/1 black Skeleton Warrior that is found in tons of black MTG decks because it’s such a diverse card.

He may only be a 1/1 creature, but his ability makes him even more feared than a 4/4 green beast with trample.

When Reassembling Skeleton is in the graveyard, you may simply tap 1 colorless and 1 black mana to bring him back onto the battlefield (tapped).

As you can imagine, having a few of these guys in your reanimate or sacrifice deck isn’t such a bad idea. 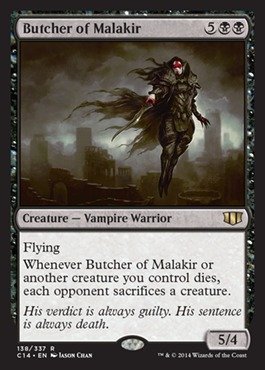 This Rare Vampire Warrior is a 5/4 flying creature that is perfect for sacrificing.

But, before you can sacrifice it, you’ll need to scrape up 5 colorless and 2 black mana to cast it.

Once on the battlefield, whenever Butcher of Malakir or another creature you control goes into the graveyard, each enemy is forced to sacrifice a creature.

See? This card should already be in your sacrificial creatures deck. 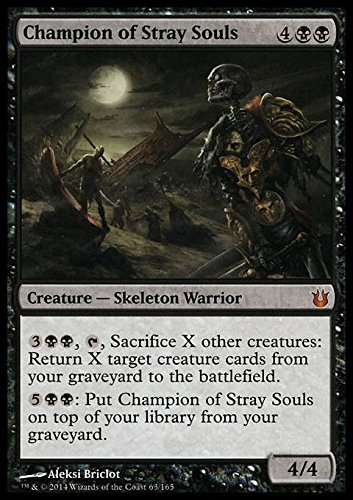 The Champion of Stray Souls is the epitome of the best creature to sacrifice. A 4/4 mythic rare black Skeleton Warrior, this card is an absolute must for black decks with a focus on sacrificing creatures.

The first ability of this card is to pay 3 colorless and 2 black mana, tap it, and sacrifice X creatures. This enables you to return X target cards to the battlefield from your graveyard.

The second ability is paying 5 colorless and 2 black mana to return Champion of Stray Souls from the graveyard to the top of your deck.

The only downside to this card is you need to have a good deal of black mana available to bring it out as well as to activate its abilities. 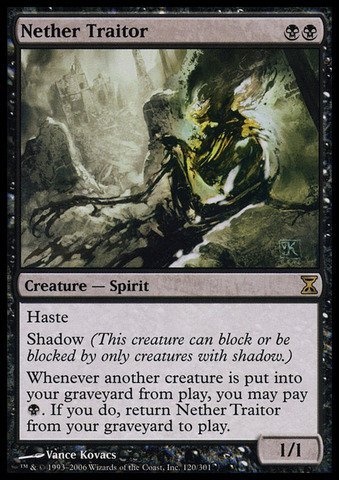 An amazing black 1/1 creature to sacrifice is the Nether Traitor, a Spirit with Haste and Shadow. The card is affordable to cast, requiring only 2 swamp mana.

The ability that makes it so perfect for a sacrificial creature card is that whenever a creature is put into the graveyard from play (controlled by anyone), you can pay 1 black mana and return Nether Traitor from your graveyard to play. 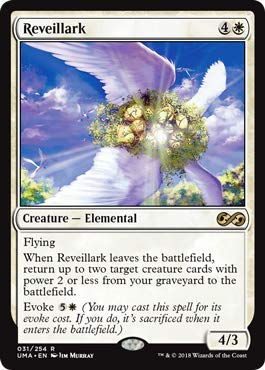 Alas, there are some great creatures to sacrifice aside from strictly black ones. That said, black-colored cards do tend to go hand in hand with death and sacrifice abilities.

Reveilark is a 4/3 Elemental with Flying and Evoke. If you cast it for its Evoke cost of 5 colorless mana and 1 plains land, it is sacrificed when it hits the field.

Otherwise, for 4 colorless and 1 plains land, Reveilark hits the battlefield and grants you the ability to return up to two target creature cards from your graveyard to the battlefield when it leaves the field.

The only catch is that the two creatures you return must have a power of 2 or less. 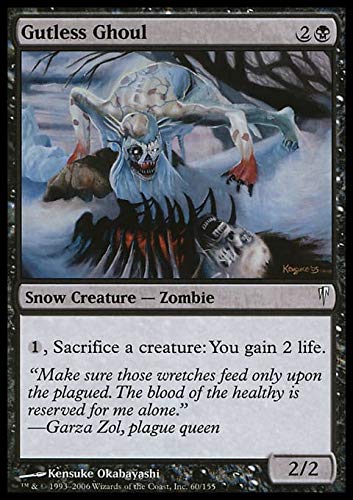 A second white card worthy of being stacked into your deck as a future sacrifice is Leonin Relic-Warder, a 2/2 Cat Cleric with an affordable casting cost of 2 plains lands.

Leonin Relic-Warder is one of the best creatures to sacrifice in order to protect another card.

What Does Sacrifice a Creature Mean in MTG?

A sacrificed creature is removed from the battlefield and served into the graveyard as if it were destroyed or killed by an opponent. Sacrificing a creature in MTG means that you must give your creature’s life up and cast it into the graveyard (typically for some sort of advantage).

Why Sacrifice Creatures in MTG?

What are the Best Creatures to Sacrifice in MTG?