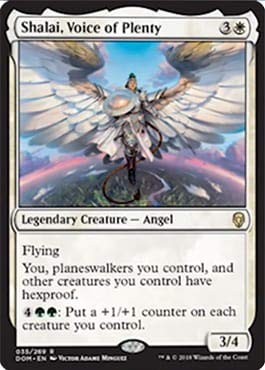 Shalai, Voice of Plenty is a rare white Legendary Angel creature card with a cost of 3 colorless and 1 white mana, and sits squarely on the top of our list of MTG’s best creatures with activated abilities.

This Angle is far from ordinary, with flying and the natural ability to turn Planeswalkers under your control to hexproof.

Even better, for 4 colorless and 2 green mana, once Shalai, Voice of Plenty is on the battlefield, you may put +1/+1 counters on each creature you control.

These counters do not expire at the end of your turn, either! 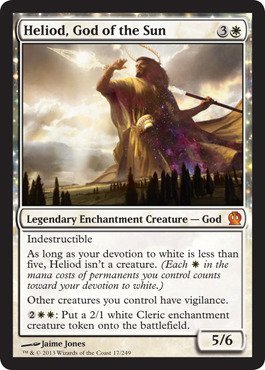 Heliod, God of the Sun is one of those white cards that appears across a crazy number of decks. His activated ability is obviously one of the main factors for his popularity.

For 3 colorless and 1 white mana, Heliod’s casting cost is quite fair for a mythic rare Legendary Enchantment God creature card.

A 5/6 Angel God, Heliod is a great card based on raw stats alone. But, he’s even more potent thanks to his Indestructable status as well as the fact that when he is in play he grants Vigilance to all other creatures you control

His activated ability? Pay 2 colorless and 2 plains lands and put a 2/1 white Cleric enchantment creature token into play on the battlefield under your control.

Nice is not the word for this card, awesomesauce is more like it. Hence, Heliod is high on our list of MTG’s best creatures with activated abilities. 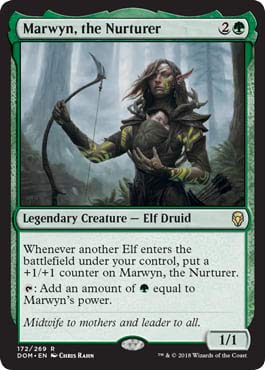 Marwyn, the Nurturer is a rare green 1/1 Legendary Creature Elf Druid with a casting cost of 2 colorless and 1 forest.

Marawyn’s activated ability is adding an amount of forest’s to the mana pool for the turn, based on her power. To activate her ability, simply tap her during your turn.

Also, whenever you bring another Elf creature out onto the field, you may put a +1/+1 counter on Marawyn, the Nurterer.

Ah ha, see? It all makes sense now, why she is the third card in our list of the best creatures with activated abilities in MTG. 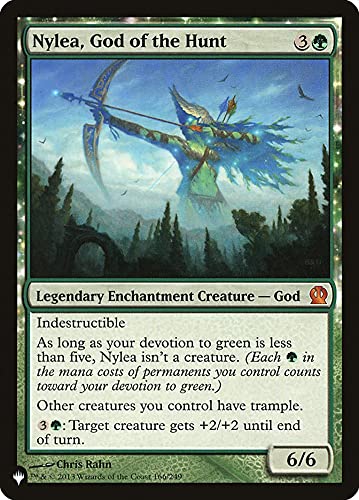 The second mythic rare Legendary Enchantment God on our list, Nylea, God of the Hunt is another awesomesauce-type card.

A 6/6 right off the rip, this God is also Indestructable and has an excellent activated ability.

Tap 3 colorless mana, and 1 forest, and a target creature of your choice recieves a temporary +2/+2 counter until the end of the turn.

And, if your devotion to green is less than 5, Nylea, God of the Hunt isn’t considered as a creature and can’t be targeted as one.

5. Purphoros, God of the Forge 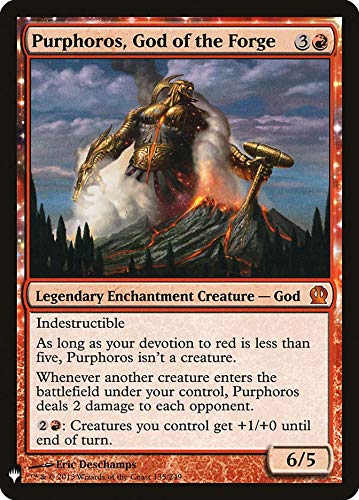 Believe it or not, the number 5 card on our list of MTG’s best activated ability creatures is yet another Legendary Enchantment God, this time of the red school.

Purphoros, God of the Forge, comes into play as a 6/5 God with Indsutructable. As long as you have less than 5 devotion to red he’s not a creature.

Also, whenever someone plays another creature, including yourself, you may have Purphoros send 2 damage to each opponent.

As if all that isn’t impressive enough, Purphoros has the activated ability to give creatures you control a +1/+0 until the end of the turn (for 2 colorless mana and 1 mountain). 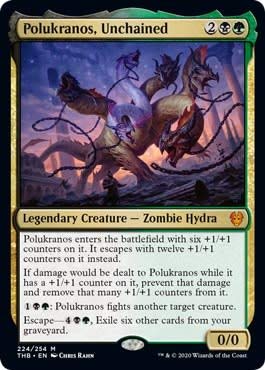 Polukranos, Unchained is Legendary, but isn’t a God like the last few cards on our list. It is a mythic rare though!

If someone would deal damage to the creature while it has +1/+1 counters on it, prevent the damage by removing the same amount of counters. 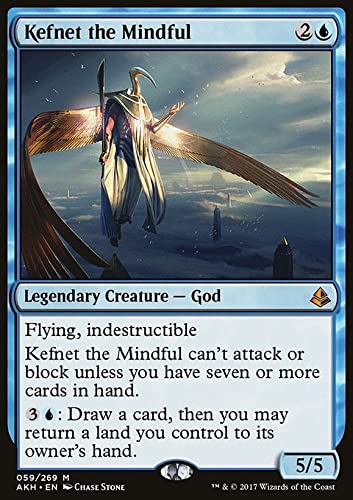 Kefnet the Mindful is a rare solid blue 5/5 Legendary God (not not a mythic one). For 2 colorless and 1 island, the casting cost is more than worth it.

Kefnet comes into play with Flying and Indestructible. That said, he can’t attack or block unless you have 7 or more cards in your current hand.

The activated ability is drawing a card and returning a land card to your hand (or it’s respective owner’s hand). The ability costs 3 colorless and 1 blue mana to activate. 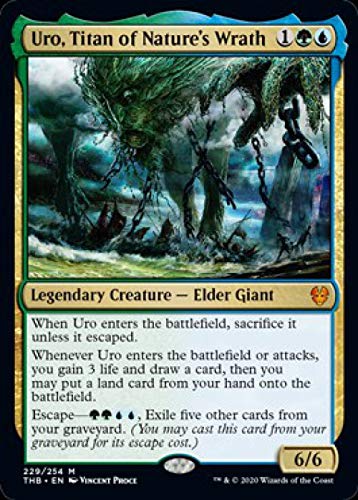 Uro, Titan of Nature’s Wrath is another 6/6 mythic rare Legendary Creature. But, it’s no God, but an Elder Giant instead.

With a cost of 1 colorless, 1 forest, and 1 island, to cast, the card is far more than affordable for it’s worth.

When it enters the field, kill it unless it is escaped. Escaping requires you to pay 2 green and 2 blue mana, as well as exiling five cards from your graveyard.

Whenever he enters the battlefield or attacks, you gain 3 life and draw a card. Then you get to put a land card into play if you happen to have one in your hand. 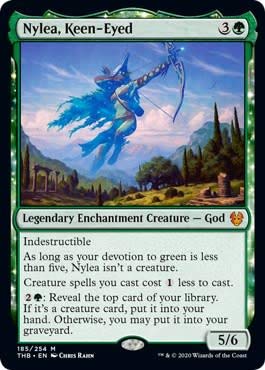 The second version of the Legendary Enchantment God, Nylea, this version is the Keen-Eyed. She has a casting cost of 3 colorless and 1 green mana.

Nylea, Keen-Eyed is a 5/6 God that’s Indestructible and as long as your devotion to green is less than five she isn’t a creature either.

Her latent ability is that spells you cast cost 1 colorless mana less.

Nylea, Keen-Eyed’s activated ability costs 2 colorless and 1 forest. When activated, you can reveal a card from the top of your hand and put it straight into play if it’s a creature.

The downside is that if the card isn’t a creature, it goes straight to the graveyard. 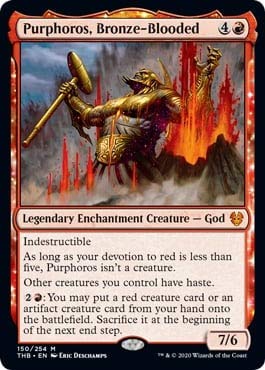 The second version of this Legendary Enchantment God is the Bronze-Blooded Purphoros. With a casting cost of 4 colorless and 1 red mana, it’s a whale of a card.

A mythic rare 7/6 God with Indestructable, all other creatures you control gain haste as long as he is in play.

Further, if your devotion to red is less than 5, he’s not a creature and can’t be targeted by spells and abilities meant for creatures.

For 2 colorless and 1 red mana, you may play an artifcat creature from your hand for free. The downside? You have to sacrifice it and the start of the next end step.

What Are Activated Abilities in MTG?

Activated abilities in MTG are perks and abilities that you must first pay for with mana before they become active. Some activated abilities require the card to be tapped, but more than often they don’t require tapping. That means you can repeat the ability as many times as you can pay for it each turn.

How Do You Use Activated Abilities in MTG?

To use an activated ability you must follow the instruction on the card. Most of the time this simply consists of paying a certain amount of mana. It’s that simple.

What is the Best Type of Activated Ability?