Creatures with a focus on dealing combat damage can be mighty intimidating to the enemy. Read about these 10 MTG best damage creatures, below! 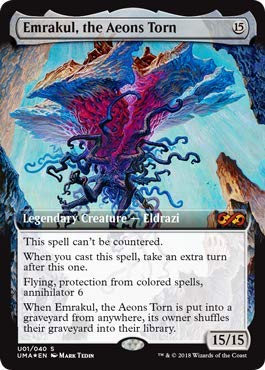 Another epic version of Emrakul, the Aeons Torn has more power and toughness than just about any other creature in the entire game. It’s a 15/15 Legendary Eldrazi, mythic rare colorless card.

At 15/15, your enemies will practically lay down and give up the moment this big bag creature hits the battlefield under your control.

He can’t be countered, you get to take an extra turn after casting Emrakul, the Aeons Torn, and he has Flying as well.

If all that wasn’t enough, this Emrakul card has Annihilator 6. And, it also gets shuffled into your deck once it is put into a graveyard.

The reason he isn’t number one on our list of MTG best damage creatures? His incredibly high casting cost of 15 mana. 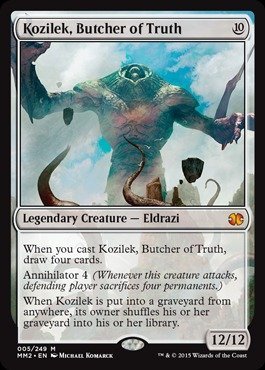 The last card on our list of MTG best damage creatures is another version of Kozilek, the Legendary Eldrazi creature. The version is a 12/12 mythic rare card, Kozilek, Butch of Truth.

When he is cast, you may draw four cards, which may help make up for the 10 colorless mana casting cost.

Kozilek, Butcher of Truth has Annihilator 4, and when he is sent to a graveyard, shuffle the entire graveyard into your deck instead. 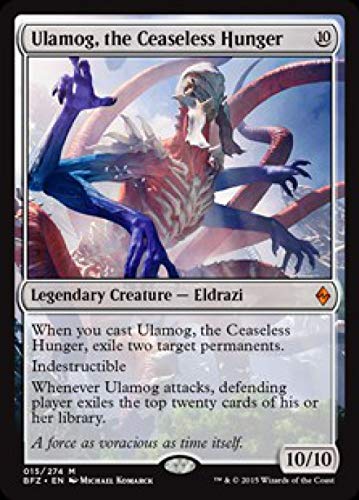 Ulamog, the Ceaseless Hunger is another massive Eldrazi creature. The 10/10 is a mythic rare Legendary creature with a casting cost of 10 colorless mana.

He comes into the battlefield with Indestructible and a couple of hardcore abilities.

When Ulamog is cast, you may exile up to two target permanents that anyone in the game owns.

The worst part for your enemies? When Ulamog, the Ceaseless Hunger attacks, the defending players must exile the top twenty cards of their decks! 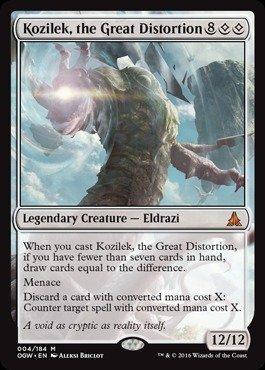 The behemoth Eldrazi comes into play with 12 power and 12 toughness and Menace, enough to make any player tremble.

When he’s cast, if you have less than 7 cards in your hand? You get to draw enough cards to make your hand a full 7.

Another great benefit of Kozilek, the Great Distortion, is that you may discard a card with the same amount of mana cost as a target spell and counter it at will. 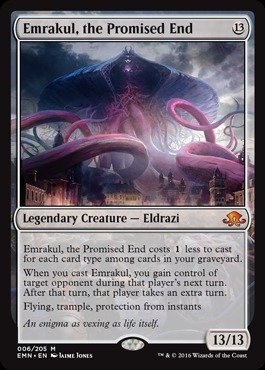 One of the top MTG best damage creatures ever thought up, Emrakul, the Promised End is a ridiculously large Legendary Eldrazi creature.

Emrakul, the Promised End is a 13/13 with Flying, Trample, and protection from instants. The card has a casting cost of 13 as well.

A mythic rare, when this card costs 1 less mana to cast for each card type found in your graveyard at the time of casting.

Even more, when you cast Emrakul, you may choose an opponent to take control of during their next turn (afterward, they get to take an extra turn). 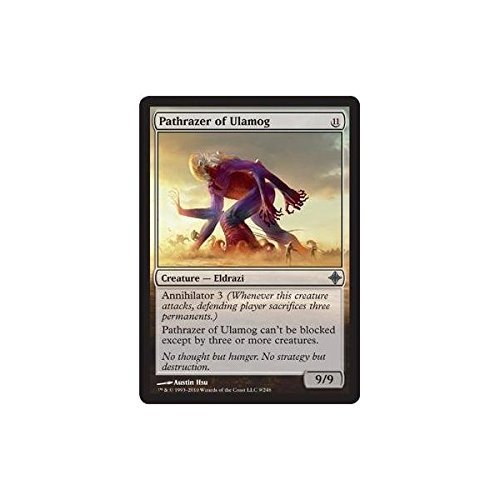 Pathrazer of Ulamog, believe it or not, is a common card. But, with 9 power and 9 toughness, Annihilator 3, and a casting cost of 11 colorless mana, it seems anything but common.

This card can’t be blocked unless the defending player uses three or more creatures to block it.

How this card isn’t at least classified as uncommon, we’ll never know! 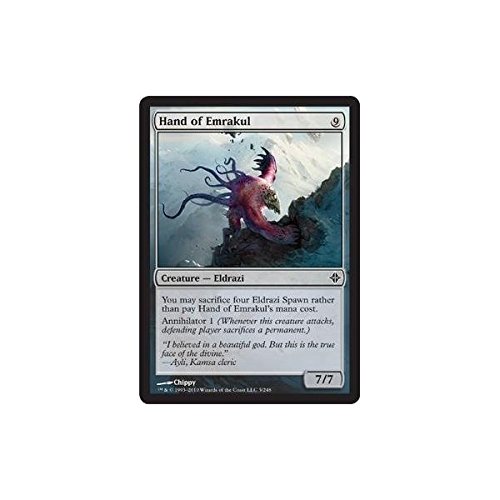 The Hand of Emrakul is a daisy among MTG’s best damage creatures. With a casting cost of 9 colorless mana, it is right there with Emrakul himself in price to play.

Hand of Emrakul is an Eldrazi with 7 power and 7 toughness, which is nothing to sneeze at. He also has Annihilator 1.

Whenever he attacks, the defending player must sacrifice a permanent.

Also, you may cast this card via sacrificing four Eldrazi spawn rather than paying its regular casting cost. 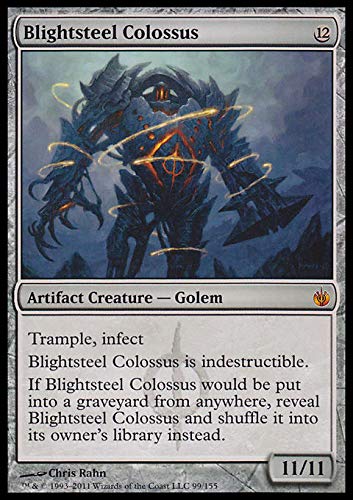 One of the few heavy-hitting damage creatures on our list that is not an Eldrazi, is the Blightsteel Colossus.

A humongous damaging dealer, at 11 power and 11 toughness, this Colossus gives any Eldrazi a run for their money.

The card is classified as a mythic rare colorless Artifact Golem. It comes into play with Trample and Infect as well as Indestructible.

Even better, if Blightsteel Colossus should be put into the graveyard, reveal it, and shuffle it straight into your deck instead!

Desolation Twin is our number one pick for the best damage creature in all of MTG. After reading the card, it is no wonder why.

Sure, the casting cost for Desolation Twin is awfully high, at 10 mana of any color, but it is more than worth waiting until round 10 to get these Twins onto the field.

Two 10/10 creatures for the price of one? What more could you want in one of the best damage creatures?

The Void Winnower is a 11/9 colorless Eldrazi of the mythic rare sort. It has a relatively high casting cost of 9 colorless mana.

When this big bad heavy-hitting creature hits the battlefield, and thereafter as long as it’s on the field, your enemies can’t cast spells that have even converted mana costs.

Your enemies also can’t block creatures with even converted mana costs either.

Not only does this big boy do major damage, but he also really puts a hamper on the casting and attacking of your enemies.

Which Creatures Do the Most Damage in MTG?

Artifact creatures, Giants, Dragons, and Eldrazi are among the heaviest hitters. That said, Ogres, Demons, Dimir, Beasts, and many other creature types are also among MTG’s best damage creatures as well.

What is Considered a Heavy-Hitter in MTG?

Depending on the deck your using, a heavy-hitter is a creature with 4 power or more. Most heavy-hitters also have an equal toughness to their power. Further, many heavy-hitters come onto the field with double-digit strength and toughness (10/10, 11/11, 12/12, and higher).