Dragons are some of the most powerful and beloved creature cards in MTG, period. Find out which 10 are our picks for MTG’s best Dragon creatures, read on below! 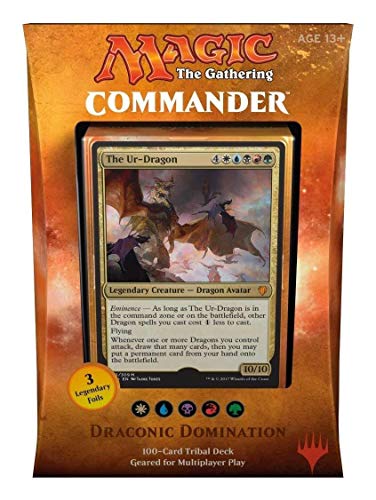 The Ur-Dragon sits on the top of nearly any MTG best Dragon creatures list. That downside is that it has a massive casting cost of 4 colorless and 1 of every other color.

The Ur-Dragon is a mythic rare Dragon Avatar, Legendary Creature, and has a whopping power of 10 and toughness of 10, as well as Eminence and of course flying.

Further, as long as he is on the field, your other Dragons cost one less mana to cast. Also, when you attack with a Dragon, you get to draw that many cards and put one onto the battlefield. 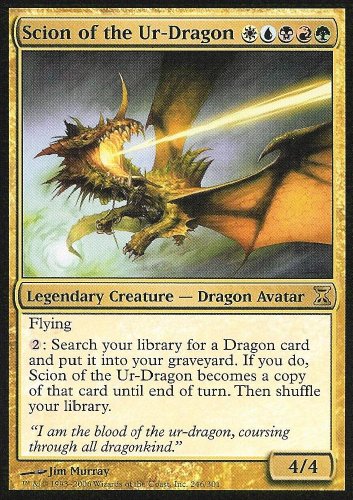 A Legendary Creature, Dragon Avatar, with a power of 4 and a toughness of 4, Scion of the Ur-Dragon is a slightly less powerful version of The Ur-Dragon itself.

The Dragon Avatar hits the battlefield with Flying and grants you an activated ability with a 2 colorless mana cost.

When you activate the ability, you may search your deck for a Dragon creature card and then put it into your graveyard. If you do so, Scion of the Ur-Dragon becomes a copy of that Dragon for the rest of the turn.

When you use this ability, you must shuffle your library at the end of your turn. 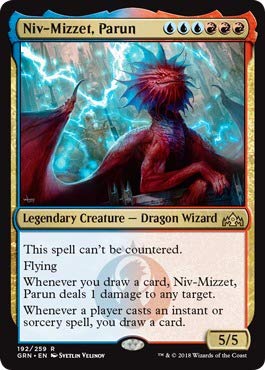 This card allows you to deal one damage to any target player you wish every time you draw a card.

Even more, whenever another player in the game casts an instant or sorcery, you also draw a card.

Basically, every single turn this card’s abilities help you out in one way or another. It doesn’t get much better than that! 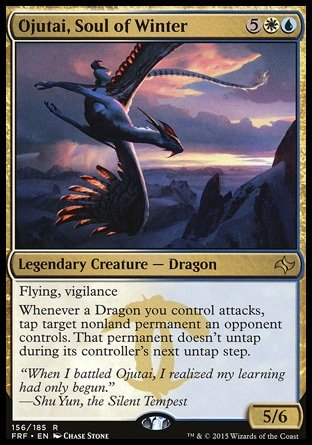 Ojutai, Soul of Winter is a 5/6 of the white and blue school. The card is a Legendary Creature Dragon of the rare school.

This Dragon comes into play with Flying and Vigilance. It has a casting cost of 5 colorless, 1 white, and 1 blue.

Whenever you attack with a Dragon, you get to tap a non-land permanent that belongs to one of your enemies. It doesn’t untap during the next untap step.

Awesome, right!? We thought so too.

Necromaster Dragon is a 4/4 Dragon creature with a casting cost of 3 colorless, 1 blue, and 1 black mana.

As with most Dragons, this one has Flying and a really great ability.

Whenever you deal damage straight to a player using this Dragon, you may pay 2 colorless mana to activate an ability.

If you pay 2, you may put two 2/2 black Zombie creatures into play on the battlefield and each enemy player puts two cards from the top of their deck to their graveyard. 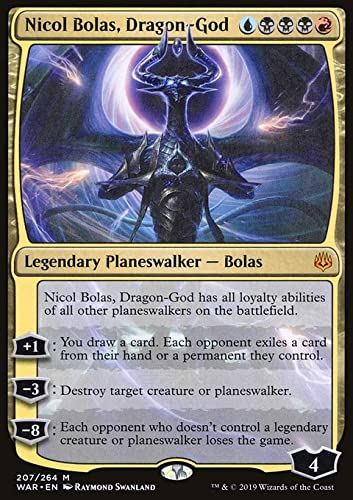 Nicol Bolas, Dragon-God is a Legendary Planeswalker that comes into play with 4 loyalty counters. When he is on the field he gains all loyalty abilities on the battlefield.

In addition, this mythic rare Dragon-God’s loyalty abilities are: pay +1 and draw a card, and each enemy exiles a permanent or card from their hand, pay -3 and destroy a target creature or planeswalker, or pay -8 and each opponent who doesn’t control a Legendary creature, or planeswalker, loses the game.

Blam! It doesn’t get better than that! Does it!?

The downside? It has a casting cost of 1 blue, 3 black, and 1 red which is not the easiest to come up with. 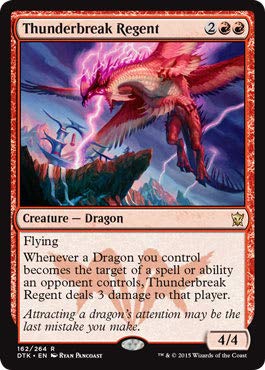 Thunderbreak Regent is a 4/4 Dragon creature of the rare class. It has a casting cost of 2 colorless and 2 red mana.

Whenever one of your Dragons becomes the target of an ability or spell, of an enemy, you may deal them 3 damage.

Not too shabby, eh? 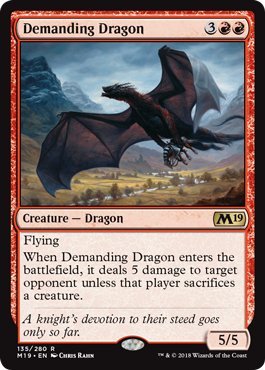 The Demanding Dragon is a 5/5 Dragon creature card of the rare class, with a medium-high casting cost of 3 colorless and 2 red mana.

The Dragon has flying, and when it enters the battlefield, it deals 5 damage to a target opponent of your choices.

If your targeted opponent sacrifices a creature, they may prevent the 5 damage points that would be dealt to them by this Dragon. 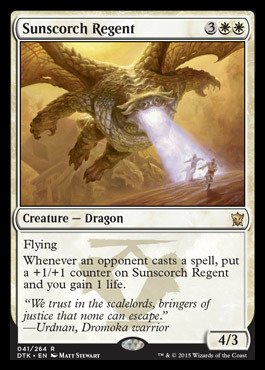 Sunscorch Regent is a rare white school Dragon with a power of 4 and a toughness of 3. The card costs 3 colorless and 2 white mana to play.

It has flying, of course, and allows you to add a +1/+1 counter to the Dragon, as well as gain 1 life point when an opponent plays a spell of any sort.

Last but not least, the Hellkite Tyrant is an imposing 6/5 Dragon creature with a fairly high casting cost of 4 colorless and 2 red mana.

This big guy comes into play with flying and Trample.

When this Dragon deals damage to a player, you gain control of that player’s artifacts. And, if you control more than 20 artifacts at the beginning of your turn, you automatically win the game.

What Makes Dragon Creatures So Powerful?

Dragon creatures aren’t just beasts in MTG, and even if they were, they’d technically be winged beasts, which makes a HUGE difference. Not only are many Dragon cards extremely heavy-hitters, but they are also endowed with super-useful abilities.

Are Dragon Decks Worth It In MTG?

If you enjoy soaring over the battlefield and annihilating everything in your path, including the enemy players, Dragon Decks are totally worth it. Dragons allow you to fly over most creatures and deal damage directly to players. They also allow you some of the most fearsome abilities in all of MTG.

What Is The Most Powerful Dragon Creature In MTG?