Drop creatures are uncannily useful card that come with 1 mana, 2 mana, or 3 mana casting cost. Read on below and discover 10 of the best 1 drop creatures.

1. Authority of the Consuls

At the top of our list is one popular card that isn’t actually a creature itself, but its powerful abilities impact you and your enemies every time a creature comes into play under their control.

When Authority of Consuls hits the battlefield, creatures that your opponents control come int play tapped.

Further, you get to gain a life point every time a creature enters the field under your enemy’s control. 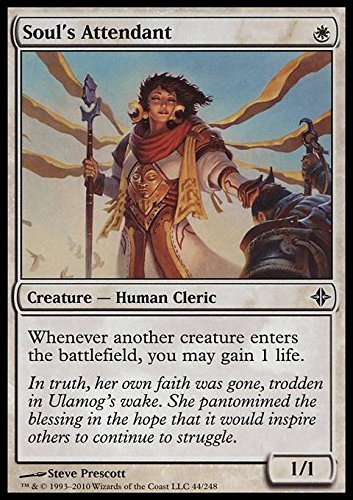 Soul’s Attendant is a 1/1 Human Cleric creature that costs 1 white mana to cost. It’s one of our all-time favorite amongst the best drop creatures.

Not only is it a pinger, and blocker, but whenever another creature enters the battlefield (under anyone’s control) you gain another life.

She may not be so powerful, but she is surely useful for padding your life points. 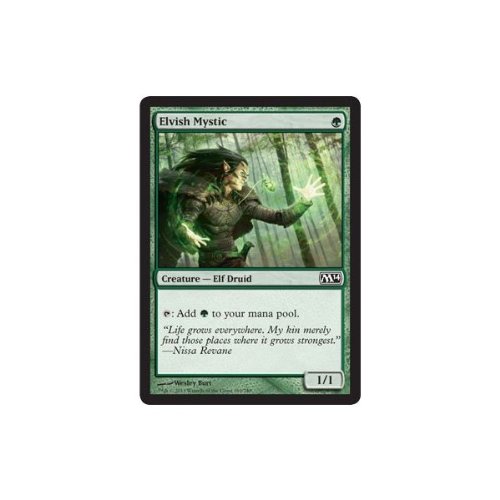 Elvish Mystic is another great 1 drop creature, with a mana casting cost of 1 green mana.

An Elf Druid, Elvish Mystic is a 1/1 creature that works as an attacker and blocker.

The best part? This card is able to tap and activate an extra green mana each turn.

Creatures that double as mana-sources should never be overlooked in the usefullness department. 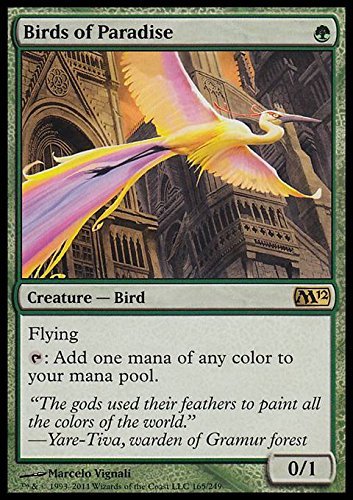 Birds of Paradise is one of the most iconic 1 drop creatures, a rare green Bird with 0 power and 1 defense. We’ve been using this card for over a decade!

This bird has flying, but only works as a blocker, not a pinger (unless you beef her up with some +1/+1 counters).

That said, the card acts as a mana source for the turn when you tap it. You may use Birds of Paradise to add one of any color mana for the turn. 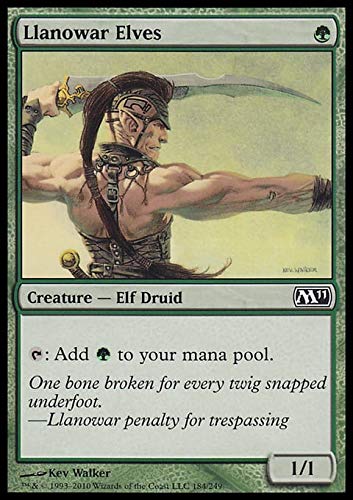 Speaking of iconic cards, few 1 drop creatures are as well-known and beloved as this simple 1/1 green Elf Druid, Llanowar Elves.

Besides being a great mana source for all green or multi-colored decks, Llnaowar Elves is a great pinger and blocker as well.

Llanowar Elves is definitely one of the best drop creatures that you want to keep multiple copies of in your MTG deck. 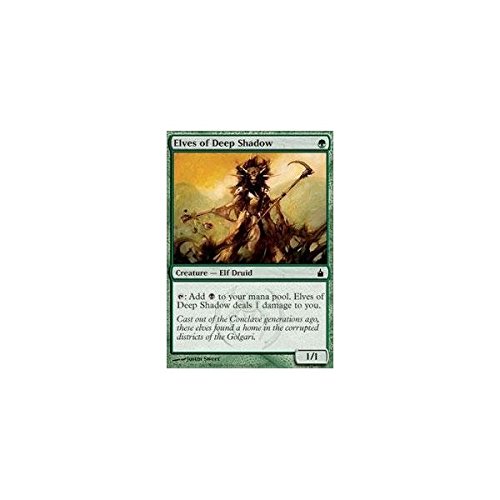 Elves of Deep Shadow is a 1/1 Elf Druid with a 1 mana drop casting cost. It may not be everyone’s cup of tea, but with the right deck, it is an amazing little card.

A perfect little pinger, the card also works as a mana source each turn.

The drawback of this card is that if you tap it and activate for extra mana it deals 1 damage to you. But, if you have a card with an activated ability that revolved around receiving direct damage… this card takes on whole new levels of awesomeness. 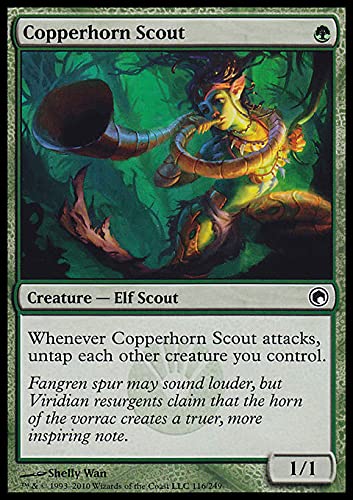 Copperhorn Scout is yet another 1/1 Elf creature, this time an Elf Scout. It has a 1 drop mana cost of the green school.

The Copperhorn Scout is a great 1 drop creature and pinger, and has an awesome ability for such a cheap card.

Whenever you attack with this Elf, you may untap each other creature that you control. 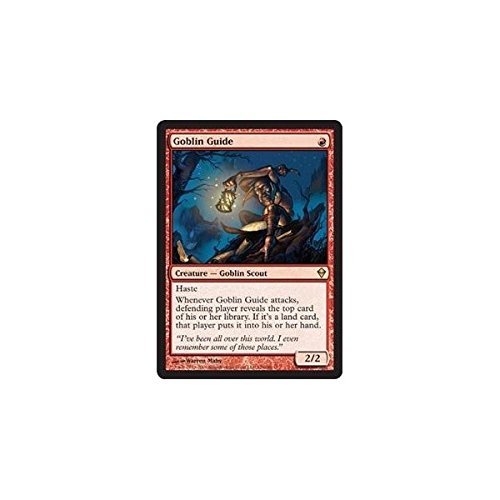 One of the stronger 1 drop creatures on our list is the Goblin Guide, with a cost of 1 red mana to cast.

A 2/2 rather than a 1/1, this rare Goblin Scout comes into play with Haste (so, you can skip the summoning sickness and start attacking right away).

The ability is a bit strange; when you attack with Goblin Guide, the defending player must reveal the top card of their deck. If it’s land, they must put it in their hand. 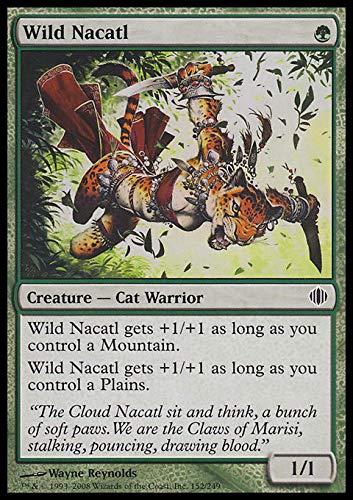 The Wild Nacatl is a fierce peon Cat Warrior pinger with a casting cost of 1 green mana.

The Cat Warrior has 1 power and 1 toughness when it hits the field, but not for long. 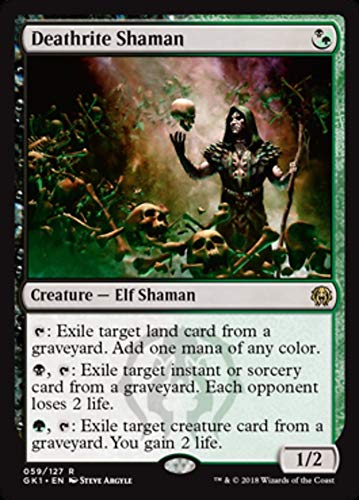 Perhaps the most fascinating of all the 1 drop creatures on our list is the green and black Deathright Shaman.

He has a casting cost of 1 black or 1 green mana and is classified as a rare Elf Shaman.

The Elf Shaman, Deathrite, has a power of 1, a toughness of 2, and several abilities.

Lastly, you may pay 1 green mana, tap the card, and exile a target creature card from a graveyard and you’ll gain 2 life.

What is a Drop in MTG?

In MTG, a “drop” is a card that costs a single mana to cast. A drop can be any type of card, including creatures, instants, sorceries, enchantments, artifacts, and more. If it costs only 1 CMC to cast, it’s a drop.

What Are Drop Creatures in MTG?

The term “drop creature” in MTG refers to creatures that you may “drop” (bring into play) rather quickly and easily. Usually, a number is included in the term, for the amount of mana it takes to drop the creature into play. For this article, we focused on the classic best 1 drop creatures.

How Do You Win at MTG with Drop Creatures?

Drop creatures alone are more than likely not going to win the game for you by themselves. However, they sure can help you put a hurting on your enemies during the early game. That said, if you’ve invested in 30 or 40 excellent 1, 2, and 3 drop creatures, you may have enough for an entire drop creature deck capable of beating down opponents from round one on.

Are Drop Creatures Worth It?

Drop creatures are well worth investing in and keeping in almost any deck. They’re cheap and you can get them out quickly, even on rounds 1, 2, and 3 (which is crucial). Most of the drop creatures would otherwise be peons without their awesome abilities.